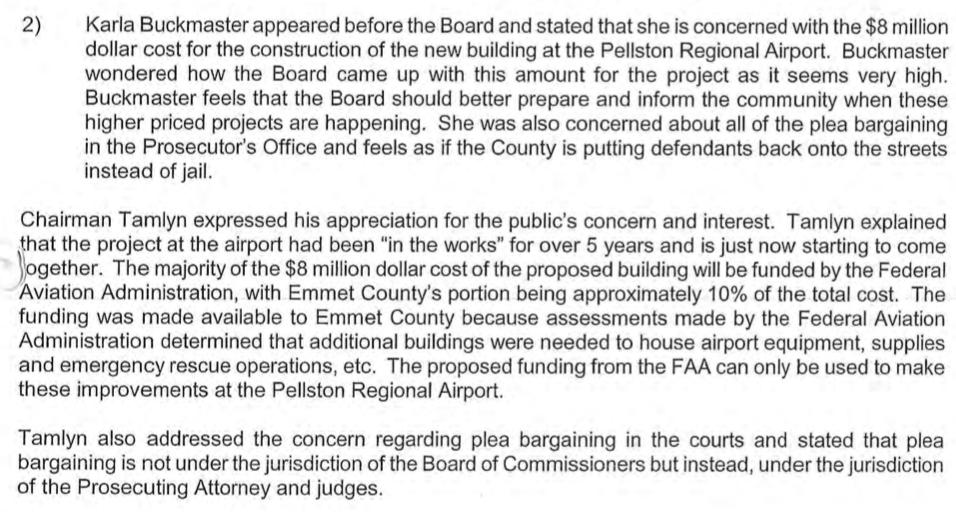 14 January 2010 ~ ECBOC Meeting Public Comment
Pellston Airport building to head to design phase
13 January 2010 ~ Petoskey News Review
A part of the article titled above stated: "Last month the commissioners approved $700,000 in delinquent county tax revenues for the next two years to match federal grant money from the Federal Aviation Administration. The FAA provides Pellston Regional Airport with a grant for more than $1 million annually, which will be saved for three years to help fund the hefty bill for the new building."

Slideshow below: The Emmet County commissioners, airport administrators, representatives from DeVere Construction (general contractor) and Mead & Hunt (architectural firm) and other officials broke ground for an $8 million, 33,000 square foot, building project at Pellston Regional Airport on 6 October 2010. The building will be the new snow removal equipment and aircraft rescue/recovery center for the airport. The structure (at the time in 2010) will house the fleet of snow blowers, trucks and three 22-foot snowblowers, along with a bay for the airport's T-1500 fire truck and all fire equipment, two large front end loaders, about 20 smaller vehicles (de-icing vehicles to pick-up trucks), offices, overnight barracks, a gym and a kitchen.