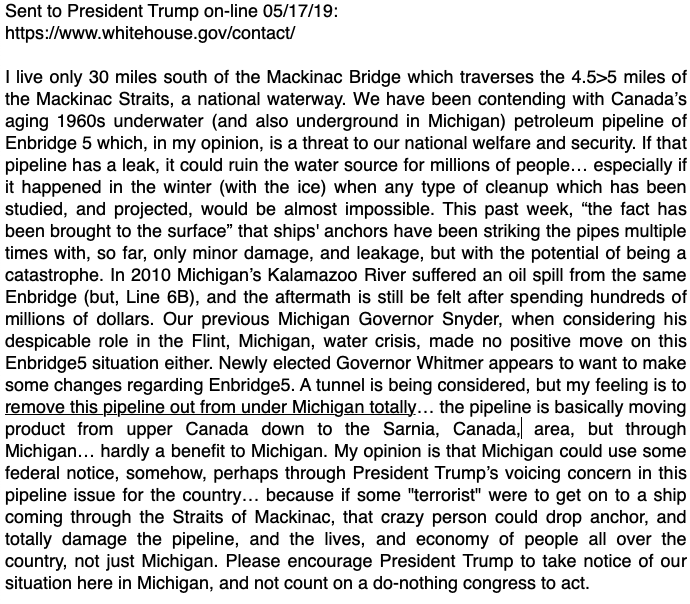 The design and compilation of the text and photos on this site are copyrighted 2017.
Most posted items will enlarge by "clicking" on them.
"Clicking" on some color highlighted words may access additional information.
Please do not copy the photos on this site, many of which have been submitted by private individuals...
just come back and visit the site often to view the photos.
ANSWER??? to the Underwater Pipeline???
"PIPELINE BRIDGE"
1955 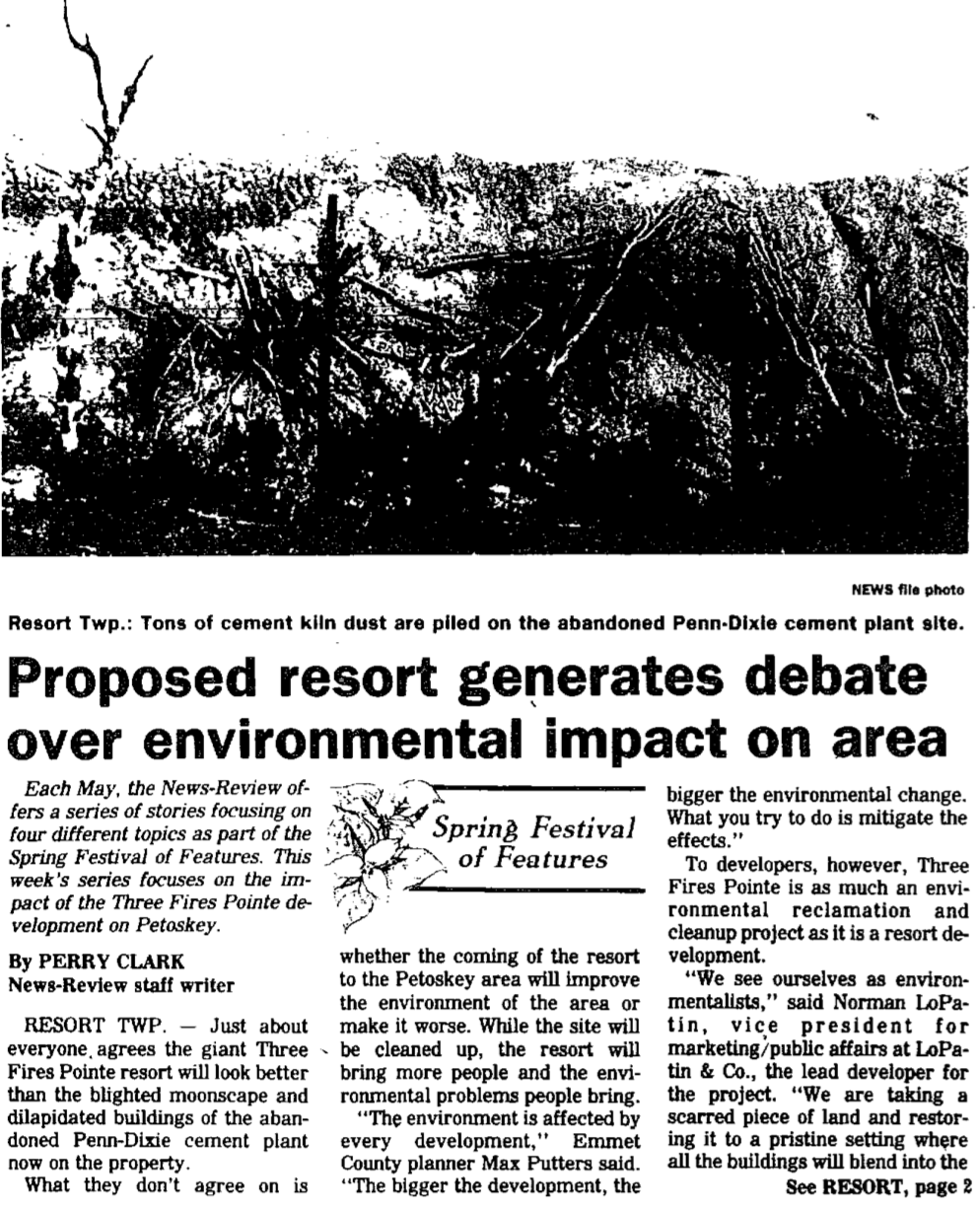 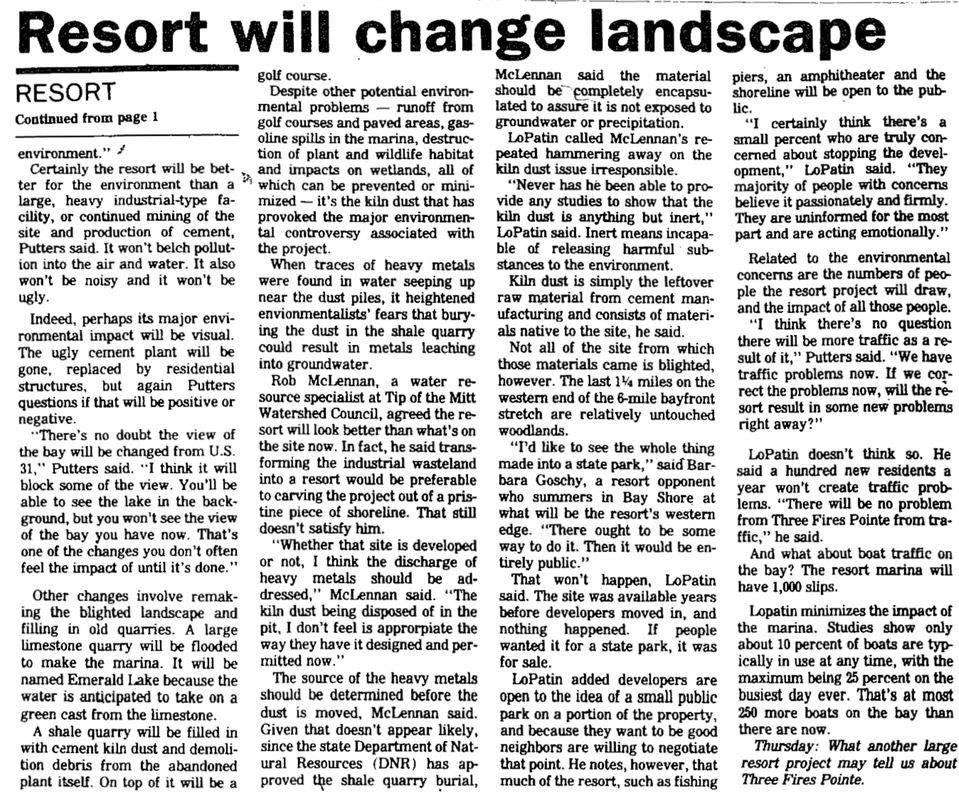 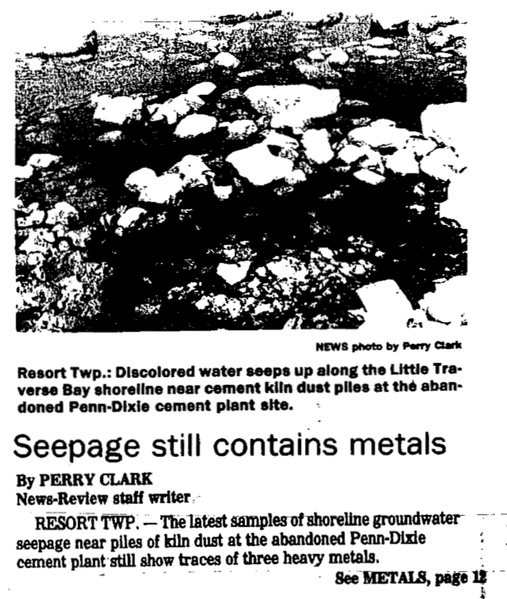 25 May 1990 ~ Petoskey News Review... no access to page 12 for continuation of article
For additional information about Bay Harbor on this same Northern Mich~Mash Preserve web site...
click HERE.
~ Crestview Mall ~
(Corner of US 131 and Sheridan Street) 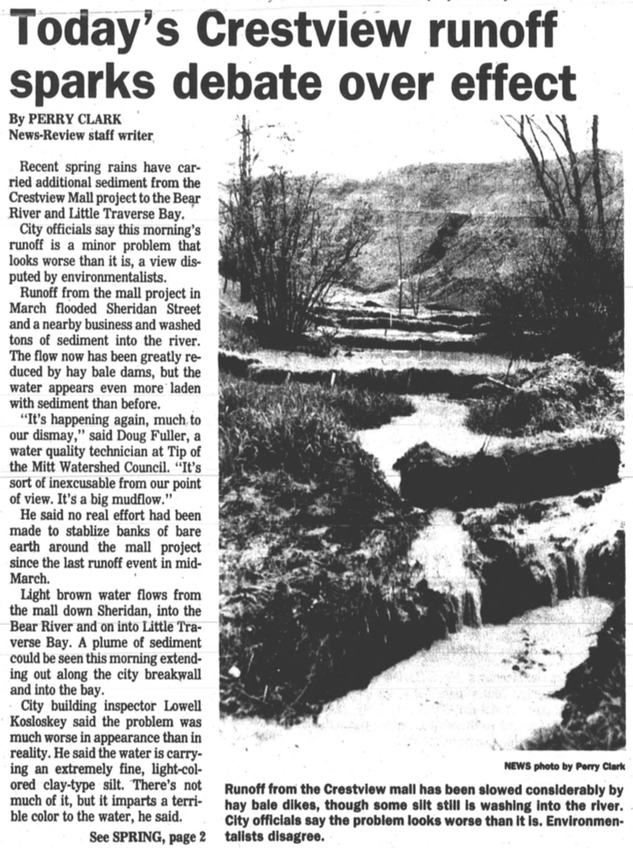 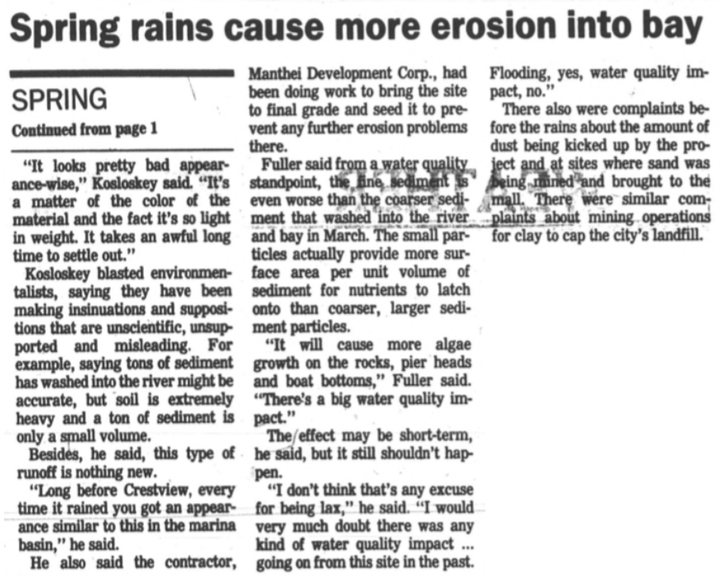 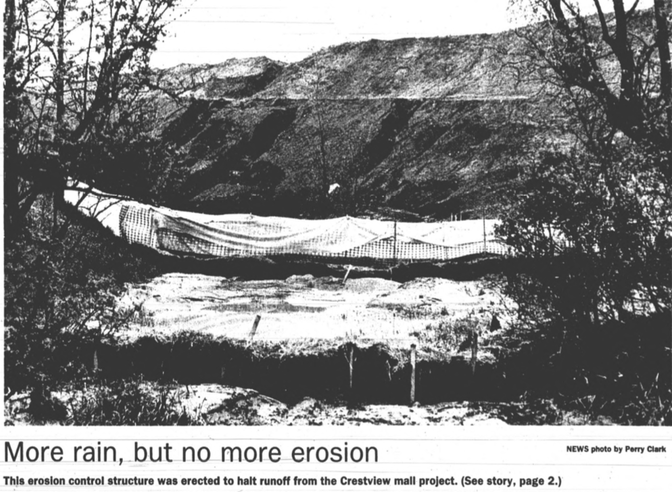 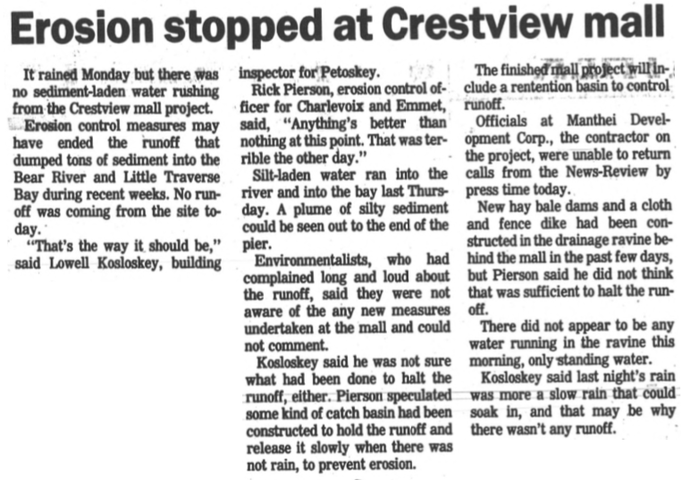 15 May 1990 ~ Petoskey News Review article continued from above...
~ Water Diversion from Lake Michigan ~ 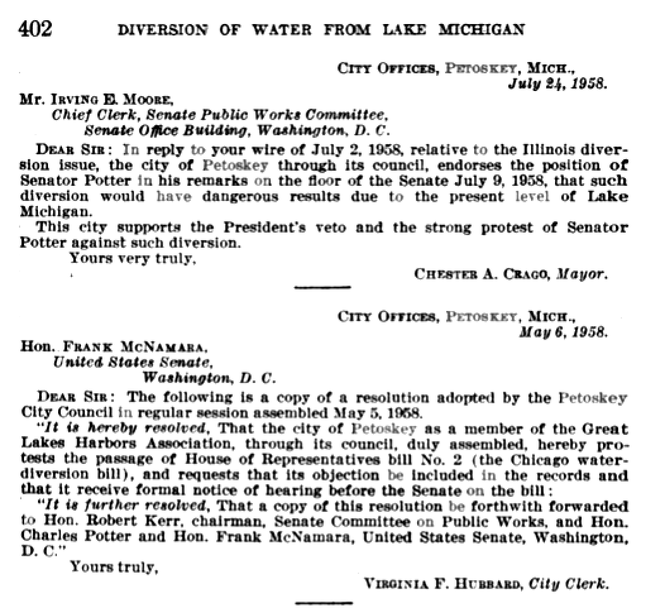 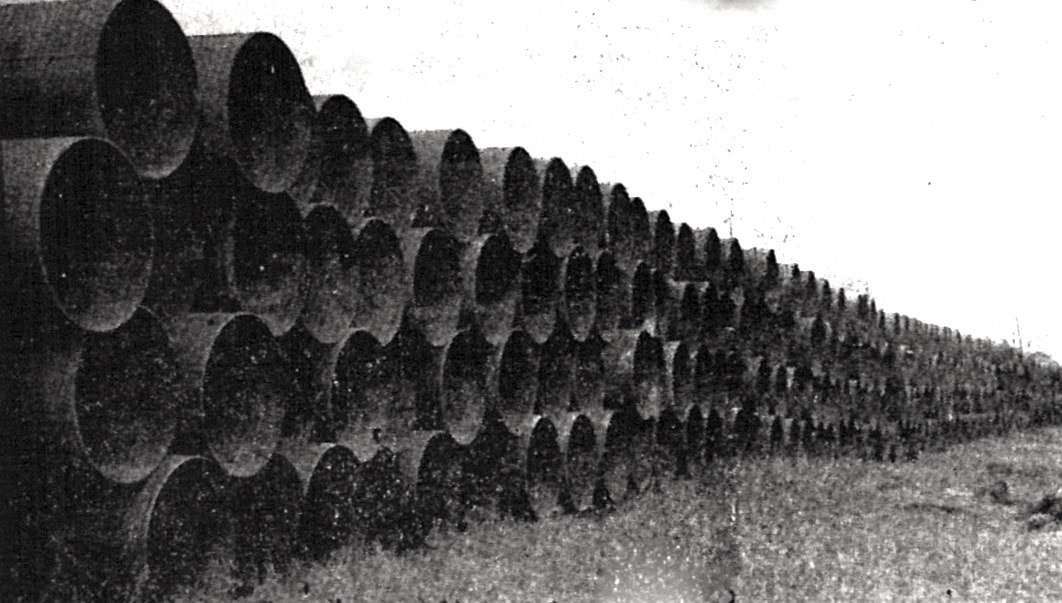 6 May 1953 ~ Petoskey Evening News
Photo Above from 6 May 1953 Petoskey Evening News had the following text written below it: "They're measuring pipe by the acre at Pellston as supplies mount for the laying of oil-carrying lines from Mackinaw City to Port Huron. Monday night 50 freight cars of the pipe were unloaded and today the 15 acre lot leased by the village was nearly full. Two pieces of the 30-inch pipe, each 40 feet long, will be joined in the yard and transported to the ditch. Brushing operations along the line's location has been started. (Evening News Photo)" 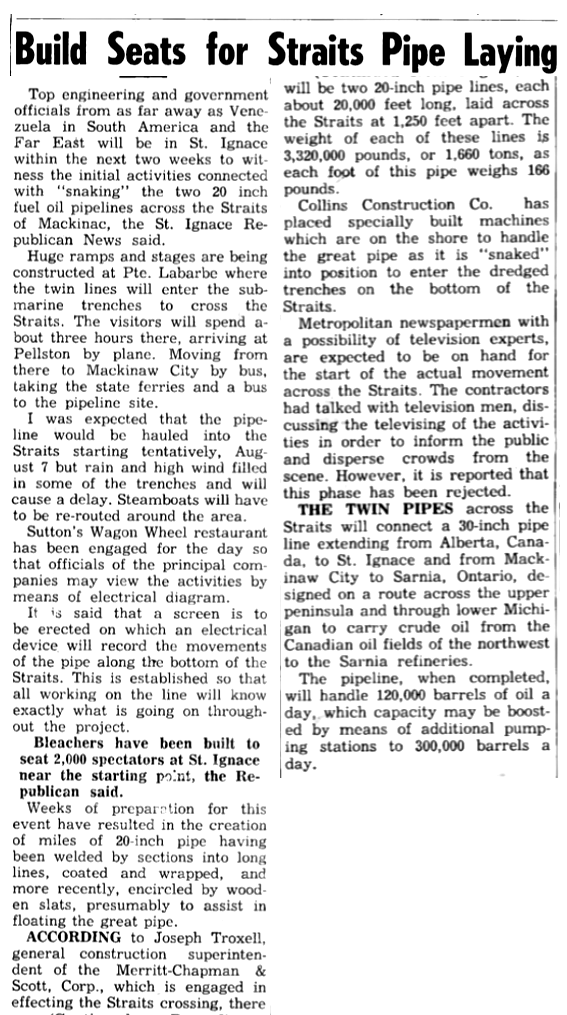 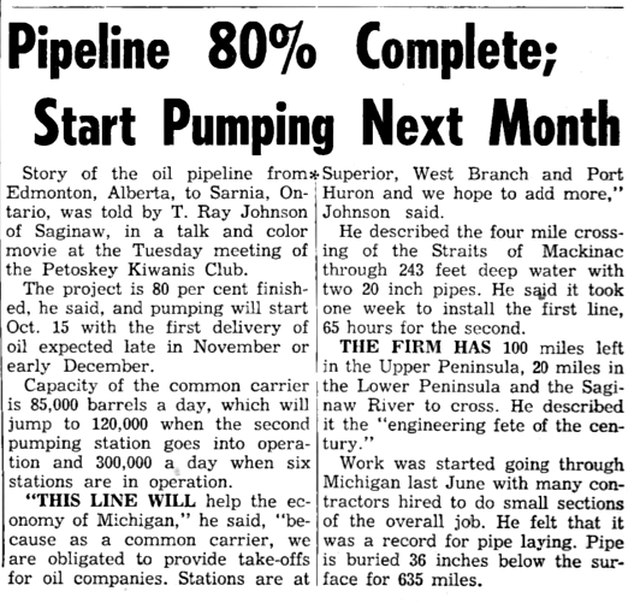 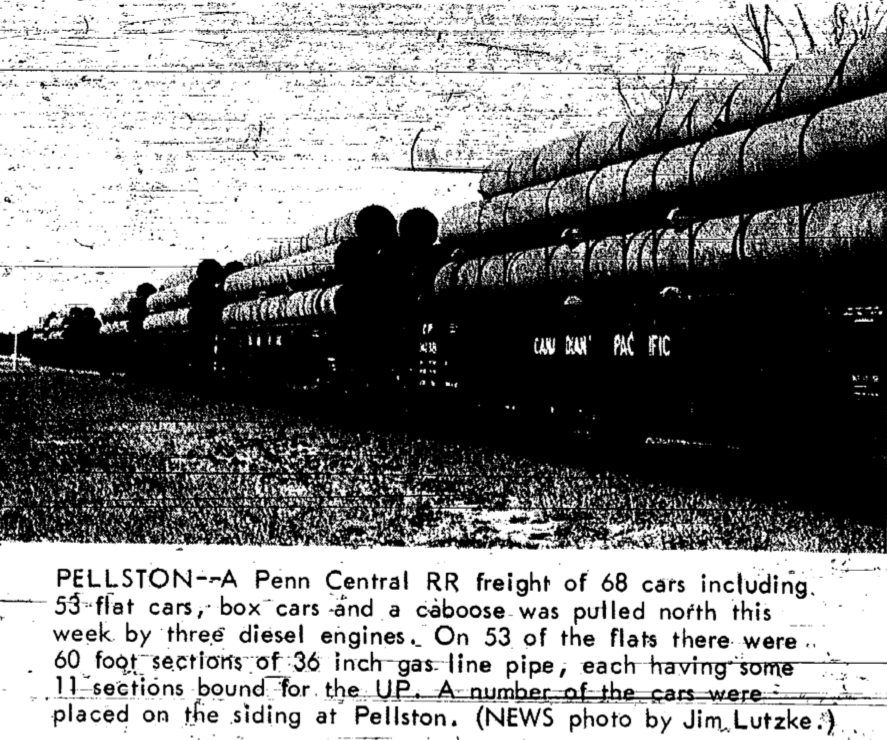 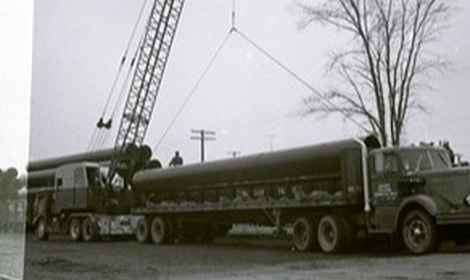 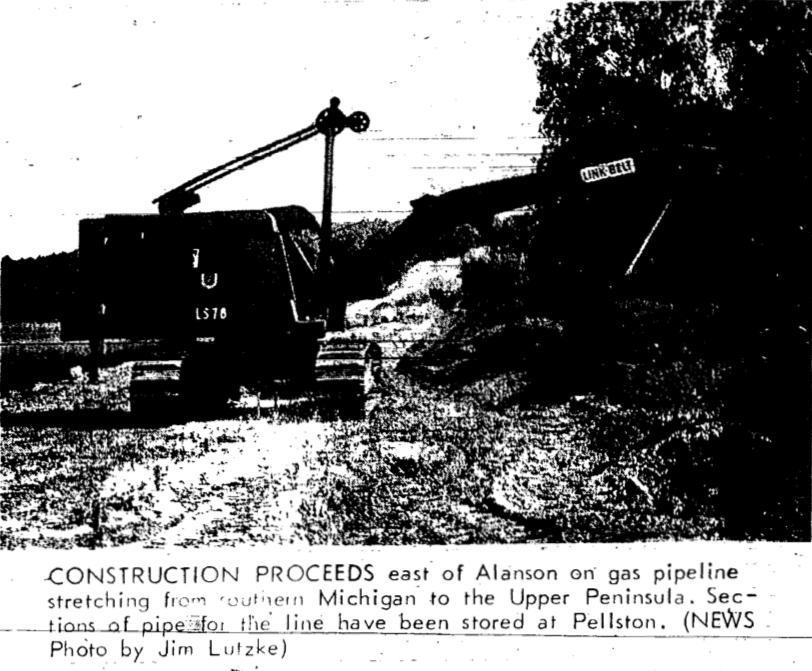 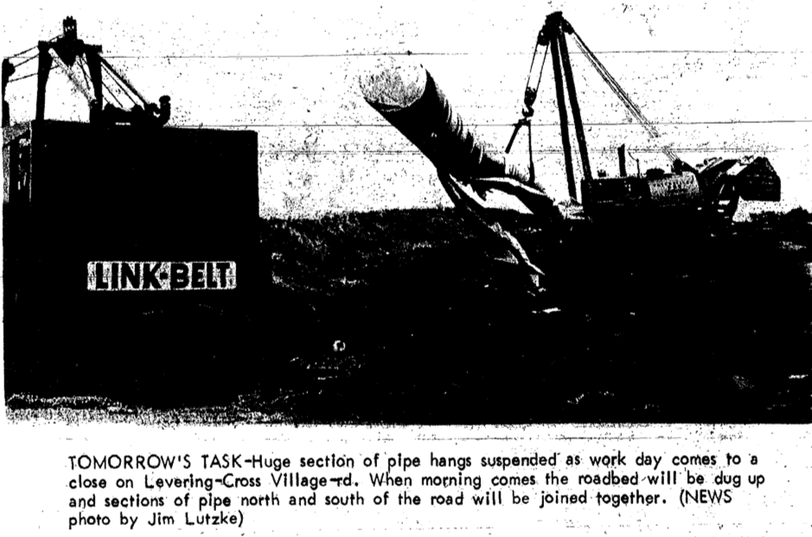 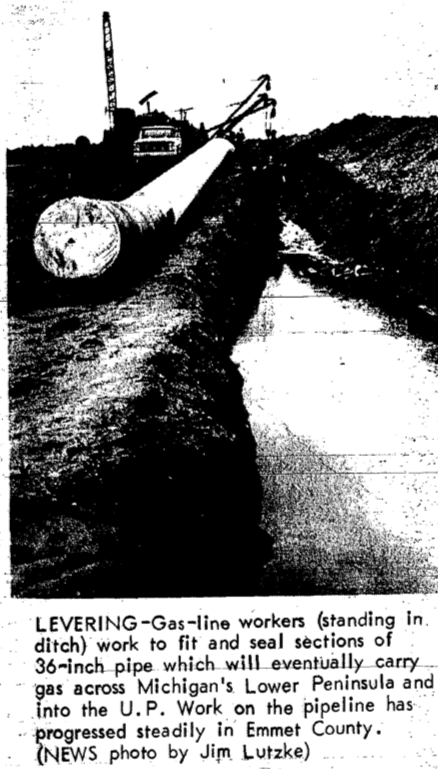 17 April 1969 ~ Petoskey News Review
Regarding the 17 April 1969 Article Above: Mackinaw City extended its taxable limits by extending their corporation limits two miles out into Straits of Mackinac. How much money do local Northern Michigan governmental entities gain from Enbridge? Here is the answer to how much Emmet County benefits from Enbridge taxes!!!  "Enbridge alone pumped $7,132,646 million in taxable value into Emmet County in 2014." So, it all comes down to immediate money... not what the future COSTS to the public will be. This information was furnished on page A-5 of Appendix A "County of Emmet General Financial, Economic & Statistical Information" accompanying the 2014 $15,000,000.00 bond to be issued as information to investors for making an investment decision. 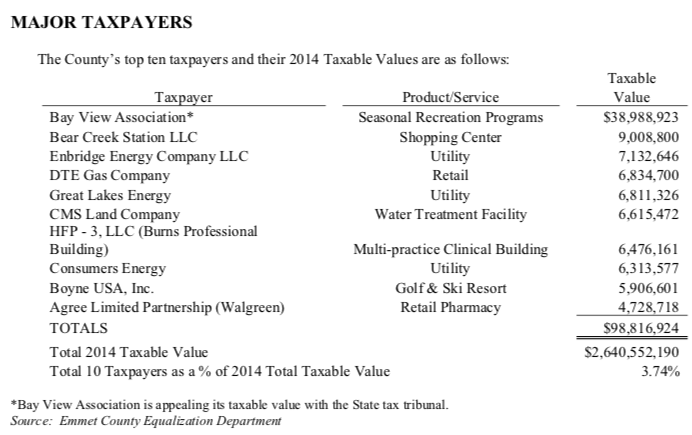 Regarding the 17 April 1969 Article Above: How much money do local Northern Michigan governmental entities gain from Enbridge? Here is the answer to how much the State of Michigan benefits from Enbridge taxes!!!  "Enbridge alone pumps close to $160 million in taxes..." So, it all comes down to immediate money... not what the future COSTS to the public will be. Click HERE for the rest of the article from the Bridge commentary shown below.

Excerpt from Bridge commentary that may be accessed above...
The 27 June 2017 Bridge Magazine reported about Enbridge Line 5:
"What is Line 5?
A 30” diameter, 645-mile pipeline that carries light crude oil and liquid propane from Superior, Wis., through Michigan's Upper Peninsula and then splits into two 20-inch diameter parallel pipelines that cross just west of the Mackinac Bridge on the lake floor of the 4.6-mile long Straits of Mackinac (which connect Lake Michigan and Lake Huron). It then travels south through the Lower Peninsula, until slanting east from Bay City and crossing under the St. Clair River at Sarnia, Ont. where most of the oil goes to gasoline refineries. Some oil goes to the Marathon Refinery in Detroit and some is shipped overseas." 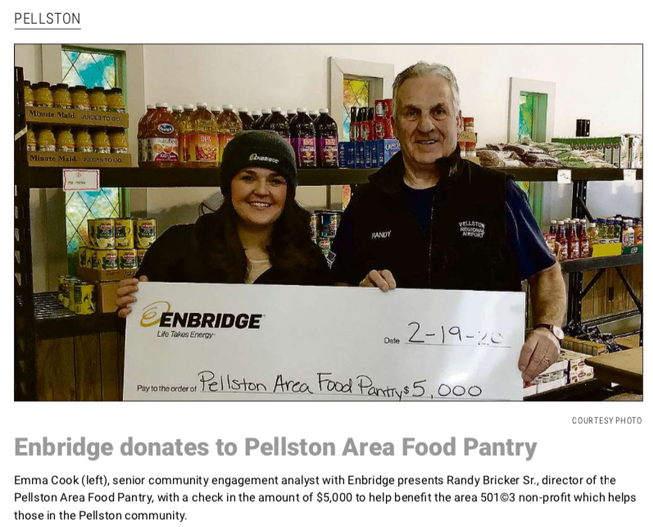 25 May 1968 ~ Petoskey News Review
1973
Alaska Pipeline being built at the same time the ENERGY CRISIS was hitting Emmet County...

14 November 1973 ~ Petoskey News Review article continued from above...
The 21 December 2018 Petoskey News Review reported: "The Straits of Mackinac is home to an underwater section of Enbridge’s Line 5 petroleum pipeline, which is targeted for replacement by a set of pipes running inside a tunnel."

The 17 May 2019 Petoskey News Review article titled "Documents record multiple anchor strikes in Straits" reported: "Last year, on April 1, a vessel dropped its anchor along the bottom of the Straits, denting Enbridge’s Line 5 petroleum pipeline in three spots and releasing insulating mineral oil from an American Transmission Co. electrical cable.
Enbridge has since repaired the pipeline damage, and American Transmission is in the process of extended repairs, which are slated to wrap up in 2021. But recent events have brought renewed scrutiny. Earlier this week U.S. Sen. Gary Peters, D-Michigan, released new footage showing the scene at the bottom of the Straits in the weeks following the strike .
"'We now know of multiple anchor strikes that have occurred to the Straits of Mackinac. This was not the first time this has happened. It’s happened previously, and the damage that has occurred due to that can very easily happen again,'" stated Jennifer McKay, policy director for Tip of the Mitt Watershed Council.
Update from Cheboygan County's Finance Committee Meeting Minutes...

13 August 2019 ~ Cheboygan County Finance Committee Meeting Minutes
The 6 December 2019 Petoskey News Review reported with the following headline:
"Enbridge sampling leaves long-lasting debris in Straits."
While Enbridge associated crews were collecting rock and soil samples in the straits on 12 September 2019, "a bore hole collapsed, leaving mechanical debris at the bottom of the waterway." That debris included a lodged 40-foot long piece of three inch drill rod, and another 45-foot piece on top of the lake's bed, in an area of the straits which is about 240 feet deep. The crews purposely did not report the incident and debris to the Michigan Department of Environment, Great Lakes and Energy, until 19 November 2019. The crew has had problems retrieving the debris, and has decided to wait until Spring 2020 for any further retrieval attempt. The attempted boring was in preparation for the proposed tunnel under the straits to house the aging pipelines. Jennifer McKay of Tip of the Mitt Watershed Council in Petoskey, Michigan, has asked for a complete shut down or the pipeline, stating: "How can the public be confident that there will not be any additional collapses or problems during drilling of a tunnel if Enbridge can't even bore a hole without it collapsing?" in a statement she gave to the News-Review.
Relevance???? 22 Cooks Needed????
Any connection to "relevance" to NEED TO FEED
Proposed Tunnel Building Workers?

6 February 2020 ~ Petoskey News Review Advertisement for Enbridge...
The pipes/tunnel run across the Straits of Mackinac,
from Emmet County in Lower Michigan to Mackinac County in the Upper Peninsula in Upper Michigan.

"Enbridge Quietly Buys Land for Tunnel"
(CLICK on above title to read entire article)
By Ted Roelofs of Bridge Magazine
Published in the 10 March 2020 Petoskey News Review
As of 20 March 2020 the Emmet County Property Search reveals that Tri-State Holdings LLC owns 20 parcels, all in the Mackinaw City area. The owner's mailing address is PO Box 2629 in Addison TX 75001. "Wawatam Township Supervisor Roger Moore noted that the parcels are where preliminary Enbridge plans show the tunnel would emerge from the Straits and link with the company's underground pipeline that continues on a southeast path through lower Michigan to Sarnia, Ontario."

Items posted farther above also reference the economical effect that Enbridge has fueled for Emmet County, Wawatam Township, the roads, fire service, Mackinaw City, and Mackinaw Public Schools, for instance. Bridge reported, "Mackinaw City Public Schools, with a budget of $2.4 million for its 155 students, is slated to get $360,000 in tax revenue from Enbridge, 15 per- cent of its budget. 'If we were to lose $360,000 of revenue, we would be in a very difficult situation with very difficult decisions ahead,' Superintendent Jeffrey Curth told Bridge. We would be under some drastic budget constraints.”

In Lower Michigan, the Village of Mackinaw City is split between Cheboygan County to the west and Emmet County to the east. Understanding the economic dynamics for the entities of Mackinaw City, reveals why few people on the Emmet County side of the village which reaps the MONEY, are okay with the pipeline and/or the tunnel which runs on the east side of the village. The Cheboygan side of the village voices its apprehension of future pipeline leaks, or tragedies that could come from Enbridge holdings, with Cheboygan County reaping no monetary benefits, even along the way!
This Enbridge tunnel effect will DOUBLE... the same effects have to happen on the north side of the straits as well; in Mackinac County, the other end of the pipeline/tunnel! Mackinac County is located on the north side of the Straits of Mackinac, and thus the other major reaper of Enbridge MONEY. Mackinac County has posted its 06/19/2019 Top 20 SEVs, its Top 20 Taxable Values and its Top 20 Owners by Taxable Value; no surprise that American Transmission Co. LLC AND Enbridge Energy LLC rank right up toward the TOP of each list. Access this information by clicking HERE. Hush money (so no complaining about envionmental issues) in the guise of tax revenue....
The 28 May 2020 Petoskey News Review reported that "Enbridge finds protective coating gaps on Line 5." Enbridge said they had discovered four spots where protective coating has worn away, leaving bare metal exposed. Enbridge spokesman Ryan Duffy said no integrity issues were determined, and Line 5 remains safe. Enbridge has fixed the same type issue in the past.
The 11 June 2020 Petoskey News Review reported that "the 6th US Circuit Court of Appeals upholds Enbridge's Great Lakes spill plans."
The 12 June 2020 Petoskey News Review reported that "Court: Michigan Great Lakes tunnel deal constitutional." It was ruled that the lame-duck December 2018 legislators "did not violate the state constitution by allowing construction of an oil pipeline tunnel beneath a channel linking two of the Great Lakes, clearing the way for the project to proceed unless the state appeals again... The ruling was a victory for Enbridge, which says it plans to finish the tunnel by 2024."
The 20 June 2020 Petoskey News Review reported that "Gov. Whitmer questions Enbridge CEO about new Line 5 pipeline damage." Enbridge, the Canadian oil transport giant on 18 June 2020 reported "significant damage to an anchor support helping hold the pipeline steady along the bottom of the Straits of Mackinac... This support lies approximately 150 feet from a section of the pipeline where damage to the pipeline coating was discovered on or around May 26... Enbridge shut down the pipeline and is gathering more information through divers, the use of a remotely operated vehicle (ROV), and the other means."
On 25 June 2020 UpNorthLive TV 7 & 4 reported "A Michigan judge has ordered a temporary restraining order against Enbridge Energy requiring them to cease all transport operations of Line 5, the twin pipeline which carries crude oil and liquid natural gas in the Straits of Mackinac....Enbridge is also required to disclose information in its possession related to the recent damage caused to the pipeline's eastern segment."

This pipeline situation needs to be addressed...perhaps even on a National Scale.
The waters in the Great Lakes should be a concern of our national welfare and security!
~ Gas Station Tanks Removed ~
(US 31 and US 131 Intersection area)
1989 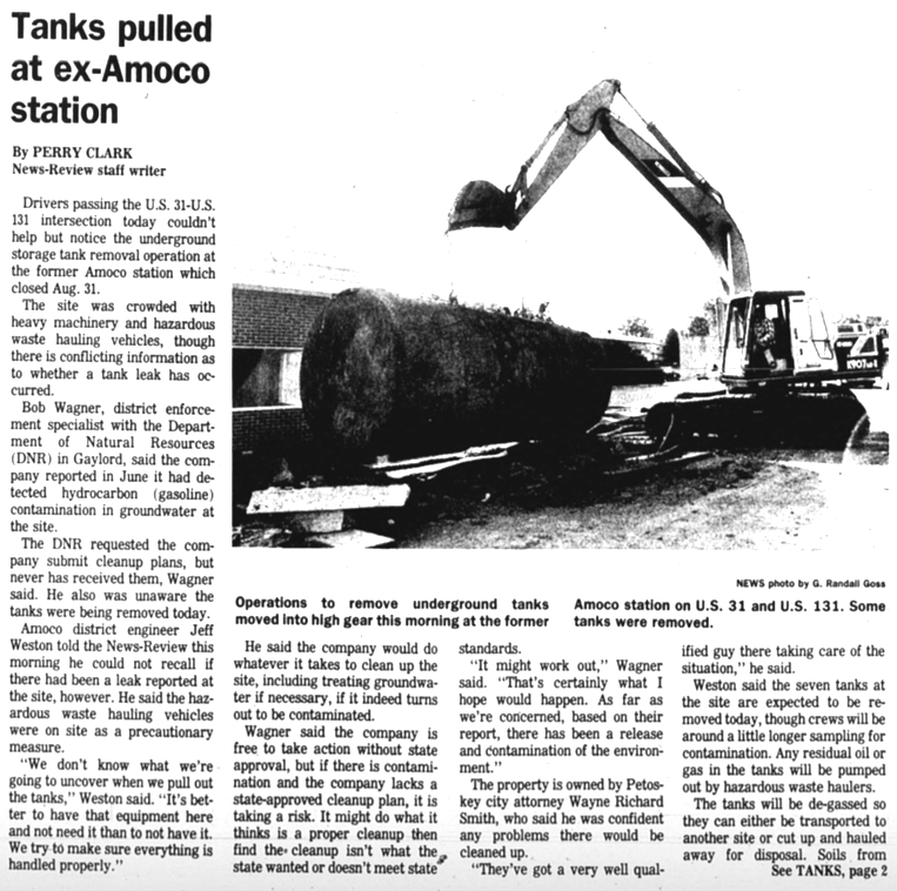 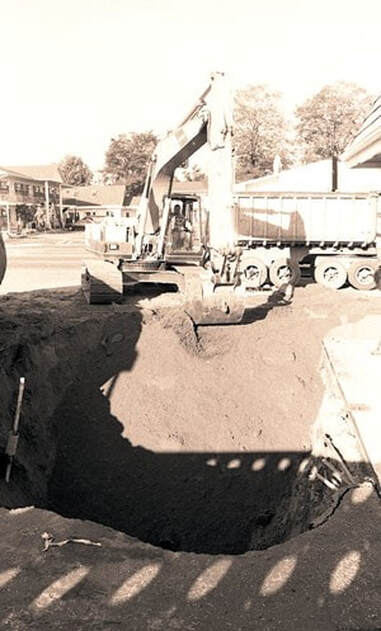 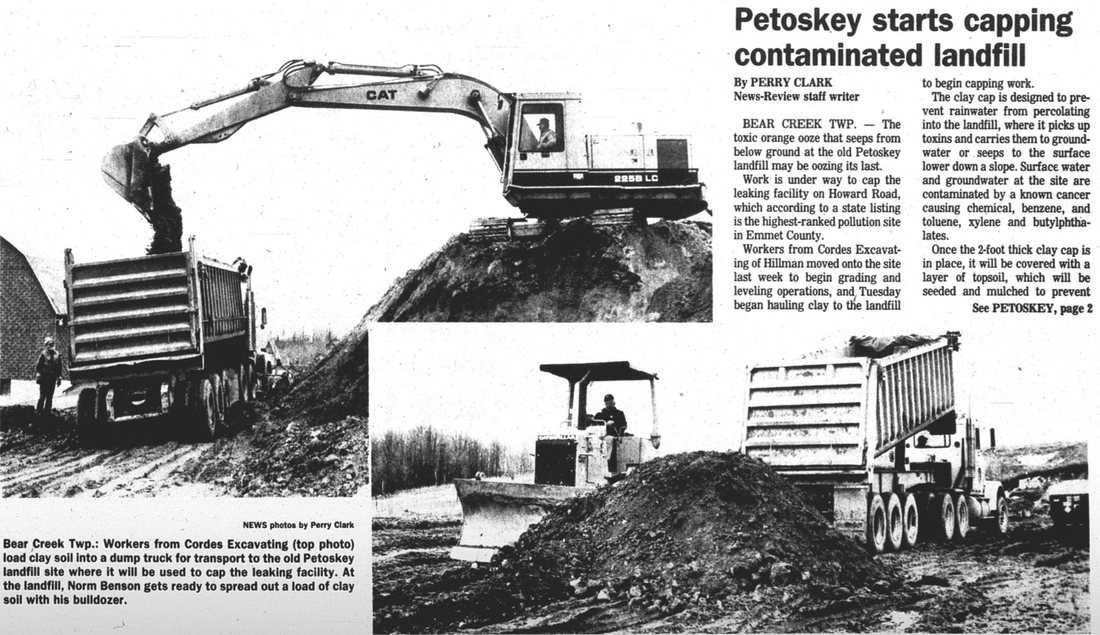 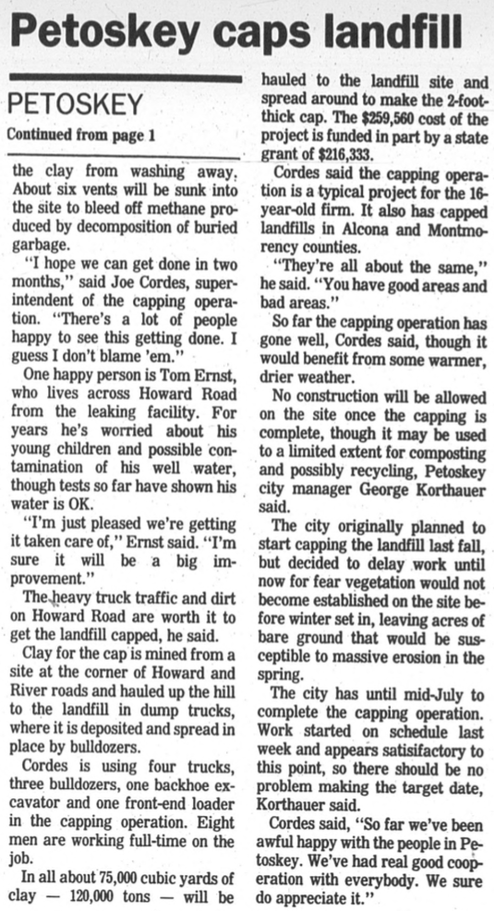