Originally called McManus Bridge; later Bridge Street Bridge...
in 2019 this bridge location goes over Bridge Street into Porter Street and Curtis Avenue.
The design and compilation of the text and photos on this site are copyrighted 2017.
Most posted items will enlarge by "clicking" on them.
"Clicking" on some color highlighted words may access additional information.
Please do not copy the photos on this site, many of which have been submitted by private individuals...
just come back and visit the site often to view the photos. 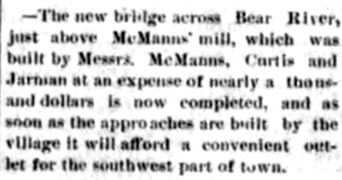 16 July 1891 ~ The Daily Record
The City of Petoskey is in possession of its oldest "McManus Bridge drawing" dated 1901... on the entire old (blackened) blue print set. On the lower right hand corner of another drawing in this set we have the Contract Date for this bridge construction at April 29, 1904.  The "new" bridge, which was still called the McManus Bridge on the construction drawings was probably constructed in 1975, as the date on the blue print is December 6, 1974, and it's unlikely that construction was begun on this bridge in the winter. ~ McManus Bridge Information above gathered through Michael K. Robbins, Director of Petoskey Public Works (2019)
1902
1904 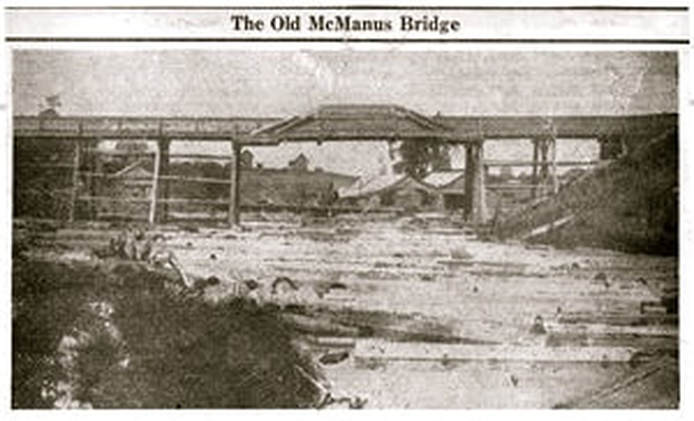 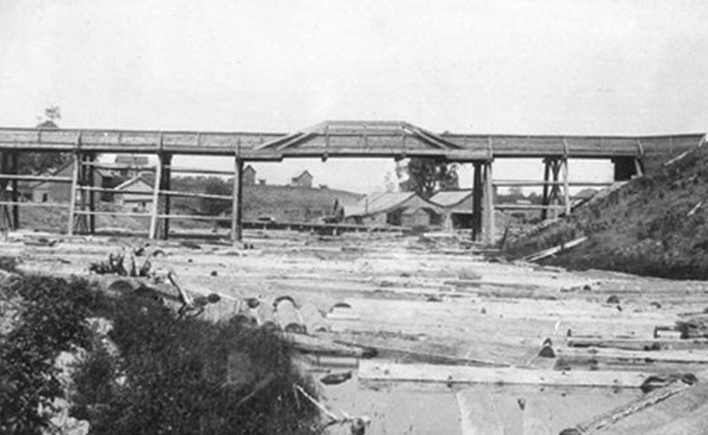 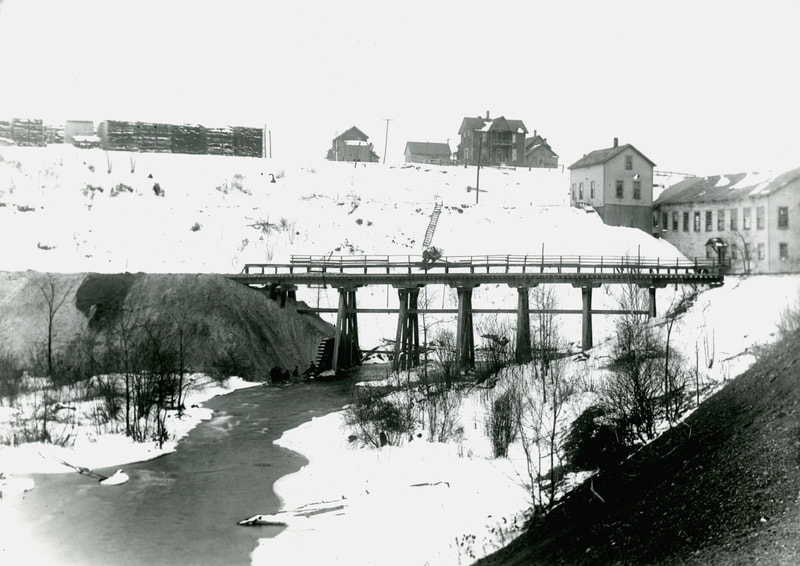 Little Traverse Historical Society Photo Archive
The 30 June 1938 Northern Michigan Review reported: "The same year, 1929, the city purchased two other pieces of property that were destined to contribute further to the development of Petoskey. The McManus property, including the power dam from which the city had purchased electricity with 35 acres of Bear River frontage at a cost of $175,000; and the Municipal dock from the Great Lakes Transportation Company.
The years of world-wide depression did not affect Petoskey as it did the ordinary city. During these trying years three additions were made to the public grounds and institutions that are the pride of local citizens. First, through the influence of John J.A. Galster and the Chamber of Commerce, Petoskey received a new concrete bridge across Bear River from the State Highway Department. The estimated cost was $250,000. Secondly, the Federal government improved the breakwater after the dock had been purchased by the city. In 1931 a concrete fill was made over the old breakwater cribs." 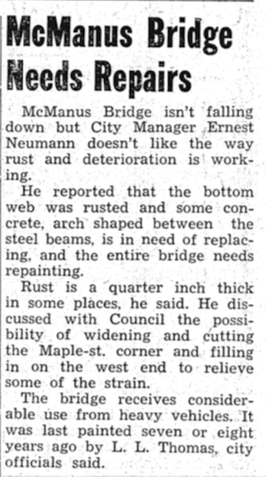 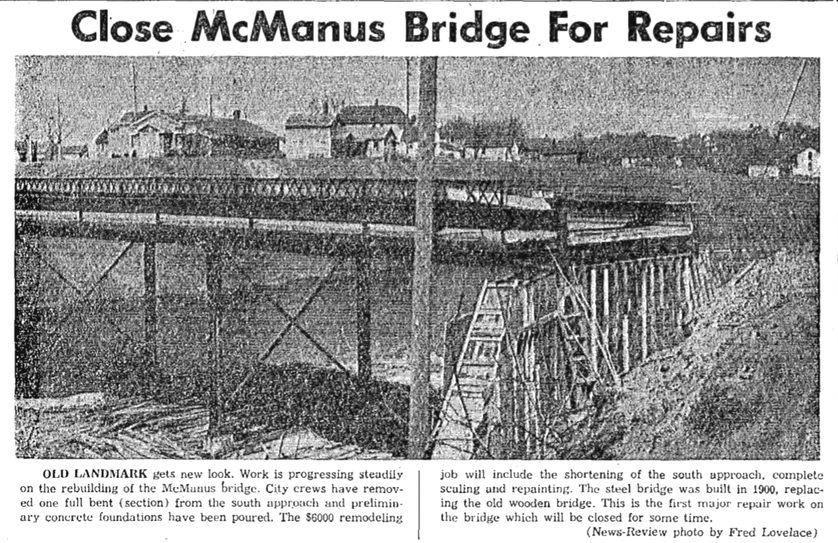 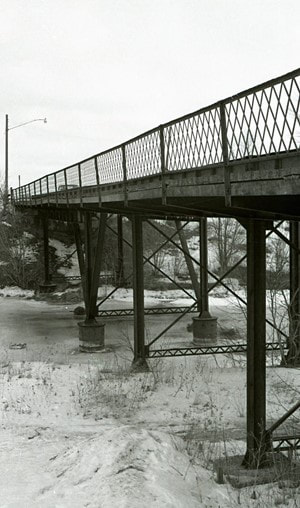 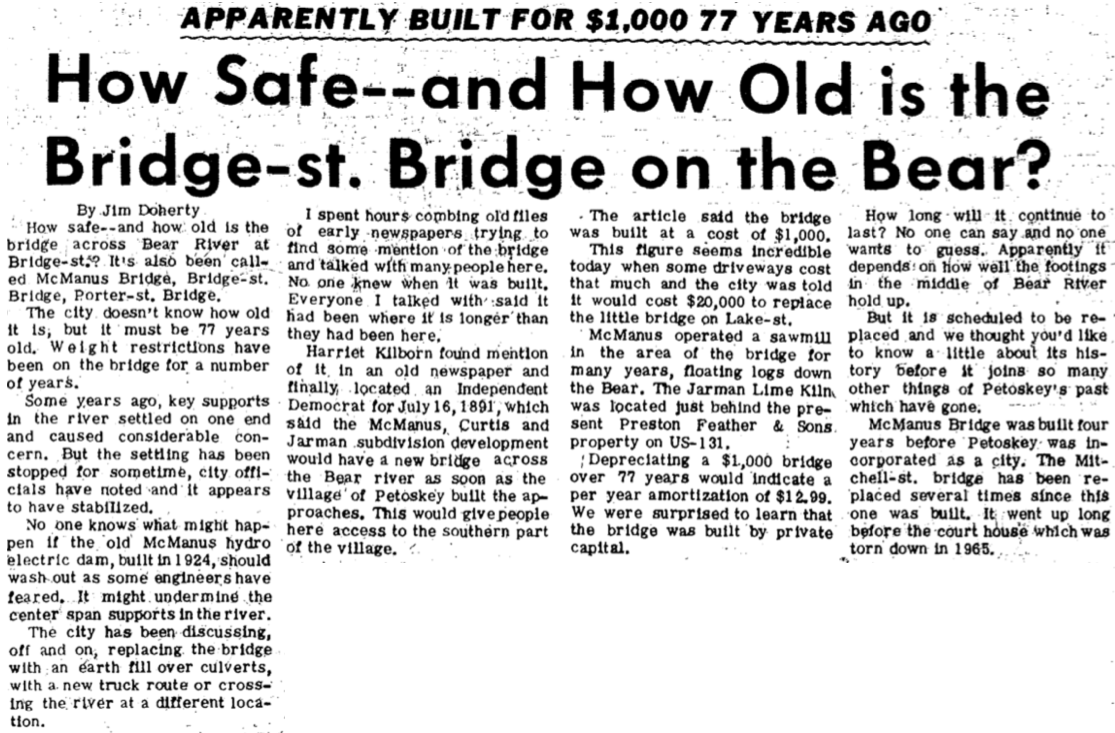 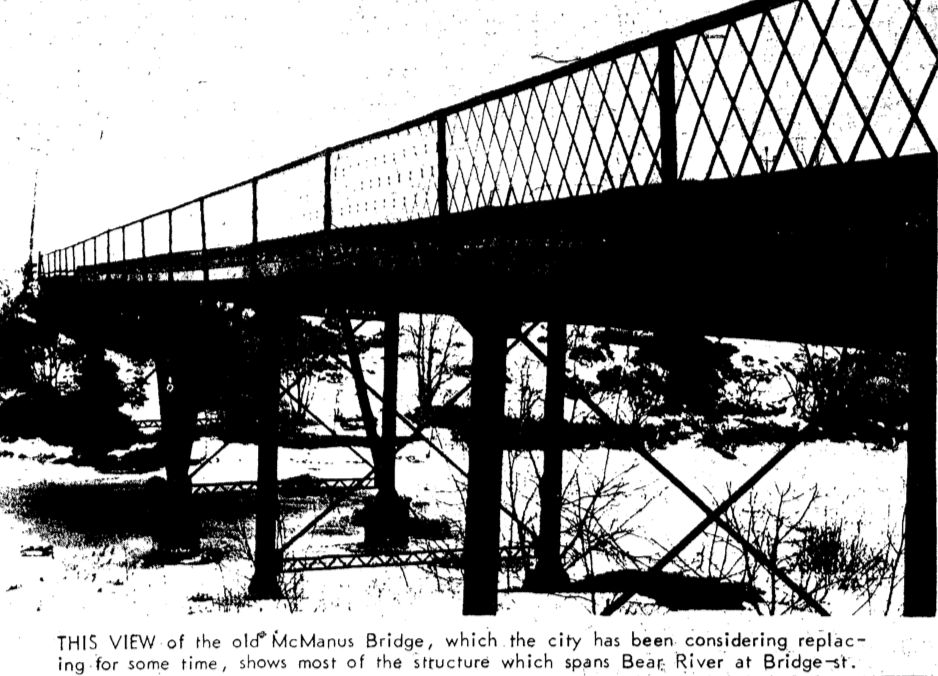 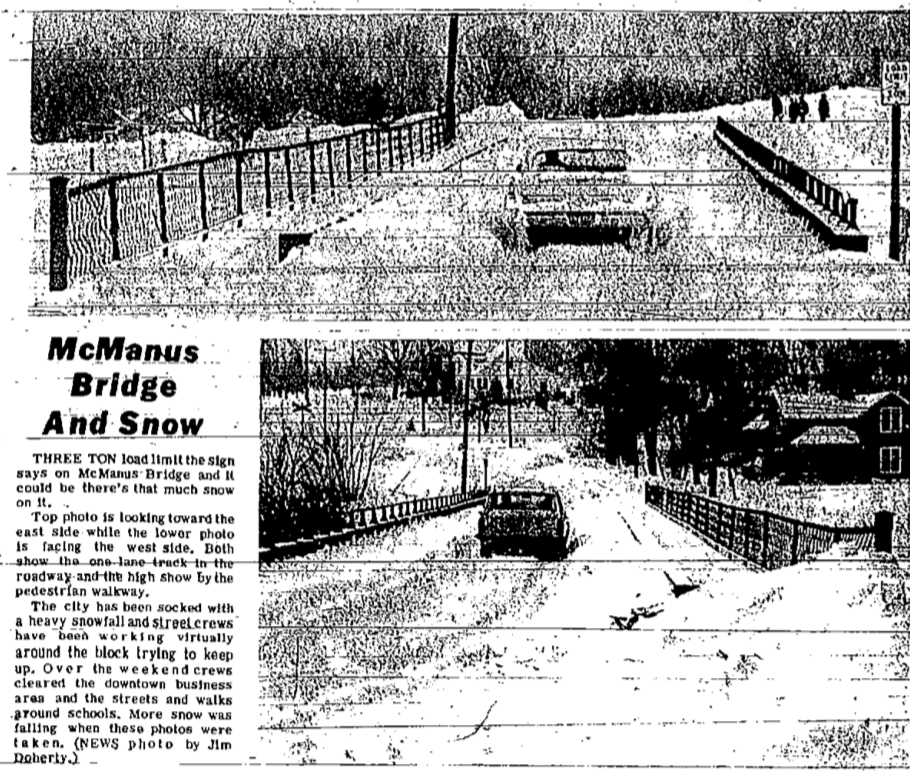 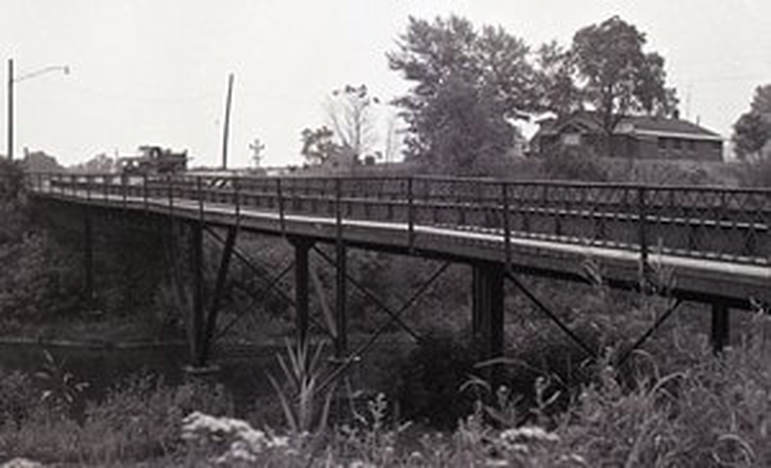 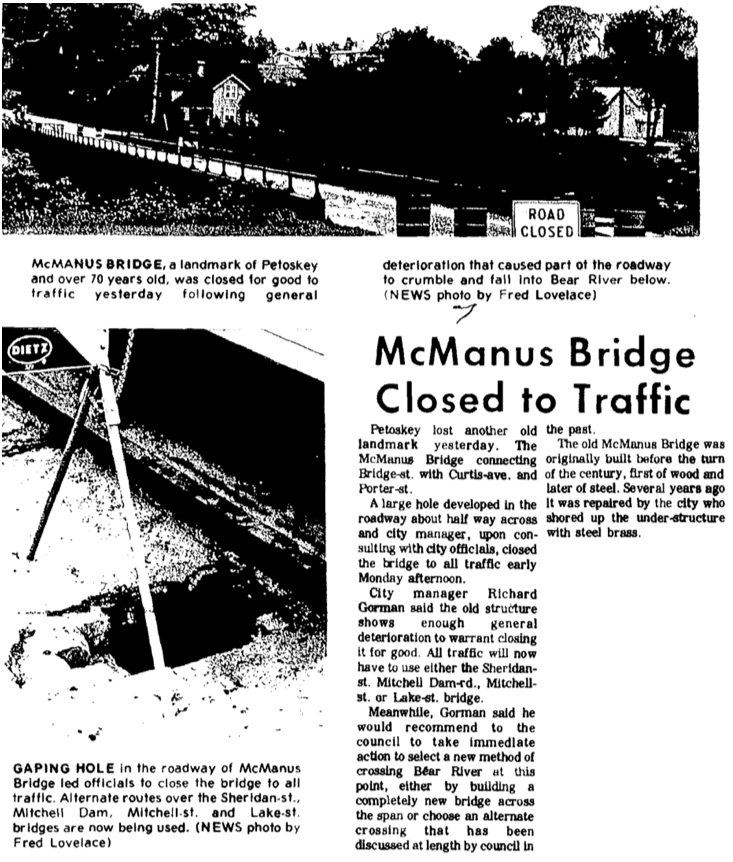 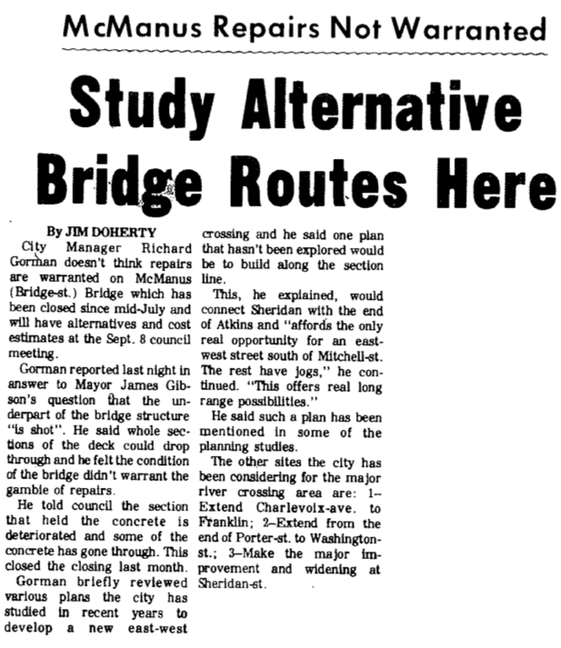 18 August 1970 ~ Petoskey News Review
October 1970 Photo Below: Almost dead center in the photo is the "Missing McManus Bridge"
as alluded to by articles above and below.
The Photo Below is posted on this Northern Mich~Mash Preserve web site only by permission from
remarkable photographer and videographer Charles Dawley of Up North Imaging. 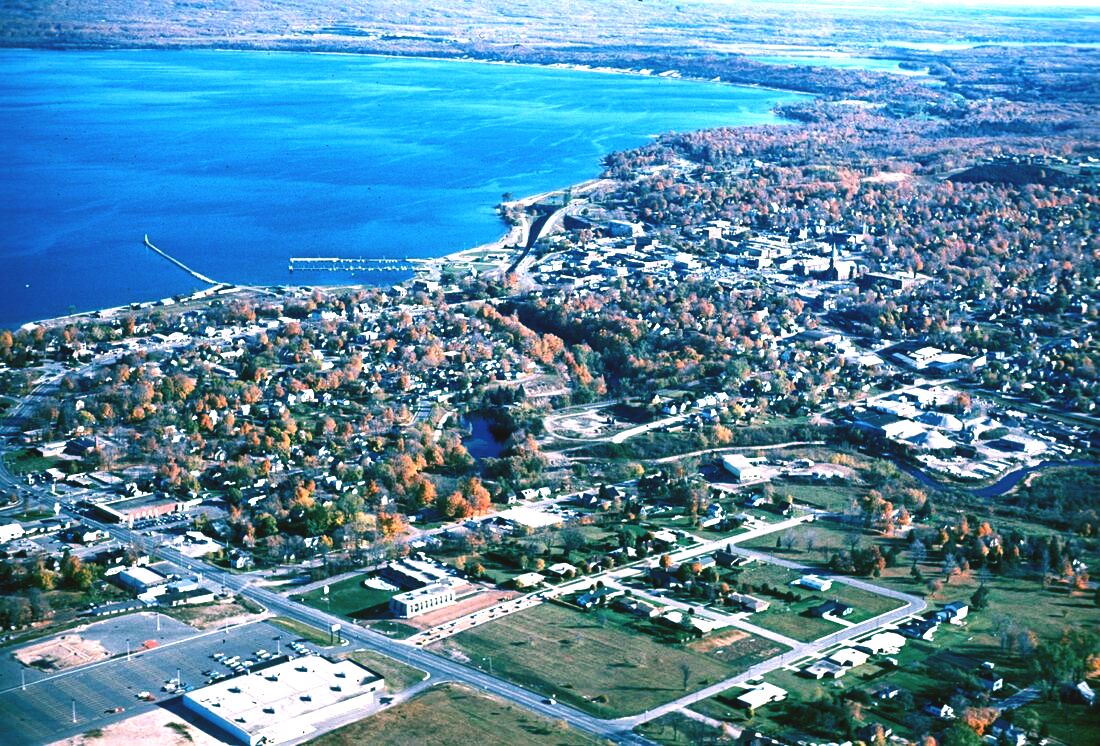 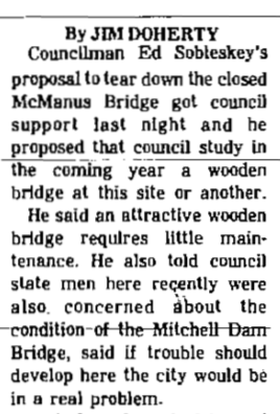 20 November 1973 ~ Petoskey News Review
1974
Article Below: Norman Russell's father Gilbert "George" Russell was the night watchman at the McManus Dam Station for many years, so thus his meaning when he wrote: "Am interested in this as it's dear to me." Also, George Russell designed and built the McManus Hydro Electric plant and operated the McManus Saw Mill. 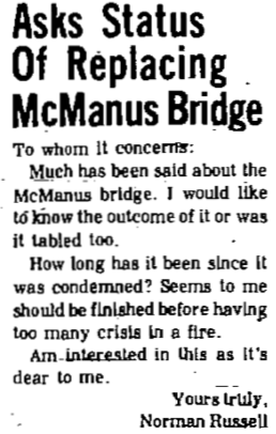 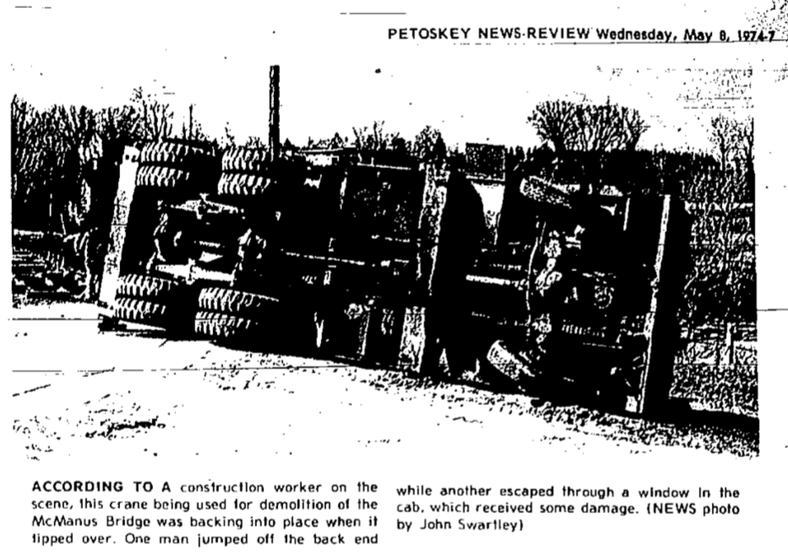 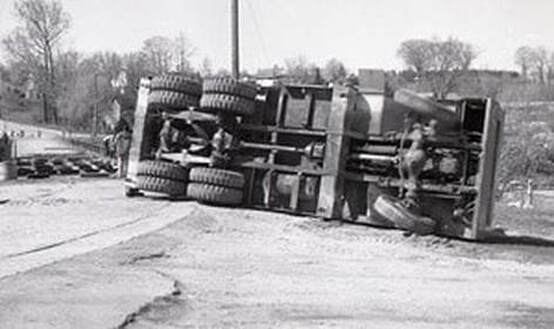 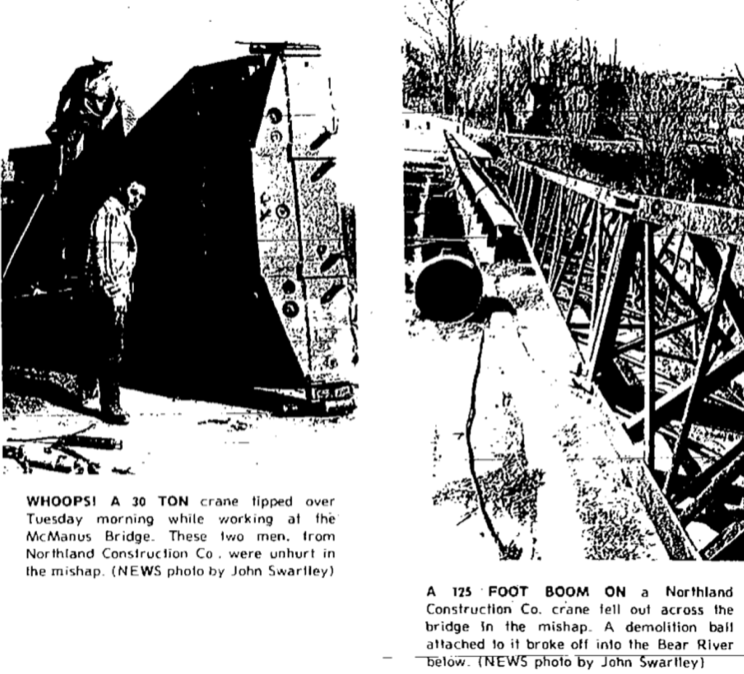 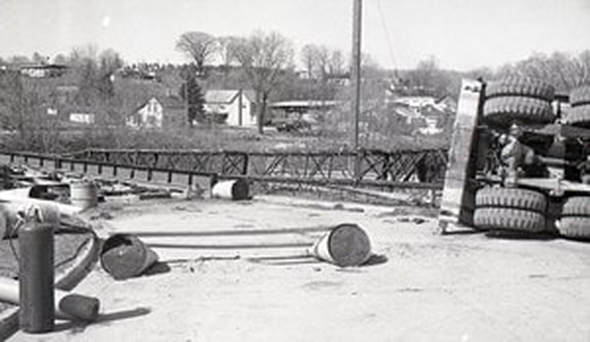 Greenwood Photo Archive Collection from Petoskey News Review (8 May 1974)
Three Photos Below from June 1974 Razing the McManus Bridge
1976
Photo Below: This is an amazing historical photo probably taken for the purpose of informing the public of the need, or the location, of a new McManus Bridge... off Bridge Street. From previous newspaper articles, it appears that the McManus Bridge was in disrepair, and unsafe, from in the 1960s. Between the red arrows is the location of the missing McManus Bridge which had been totally razed as noted in the June 1974 photos above. The bridge would connect Bridge Street and the 90 degree corner of Porter and Curtis streets. This same photo also illustrates the backed up pond water behind the Mitchell Dam around the river bend from the missing McManus Bridge. 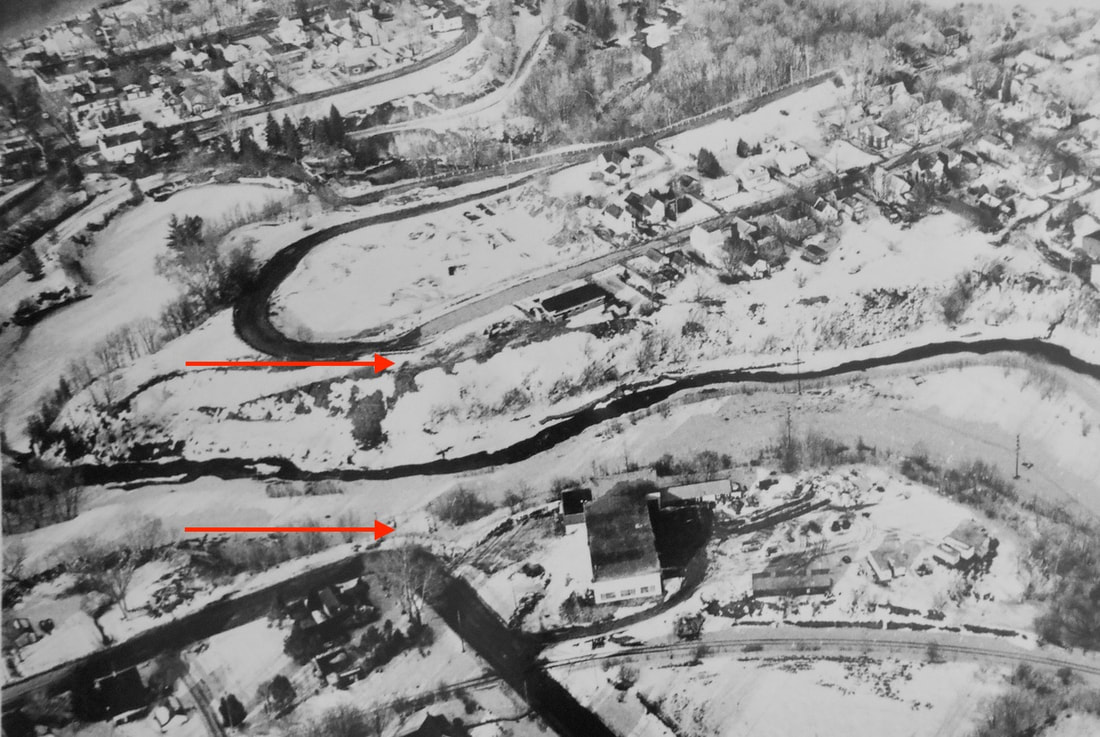 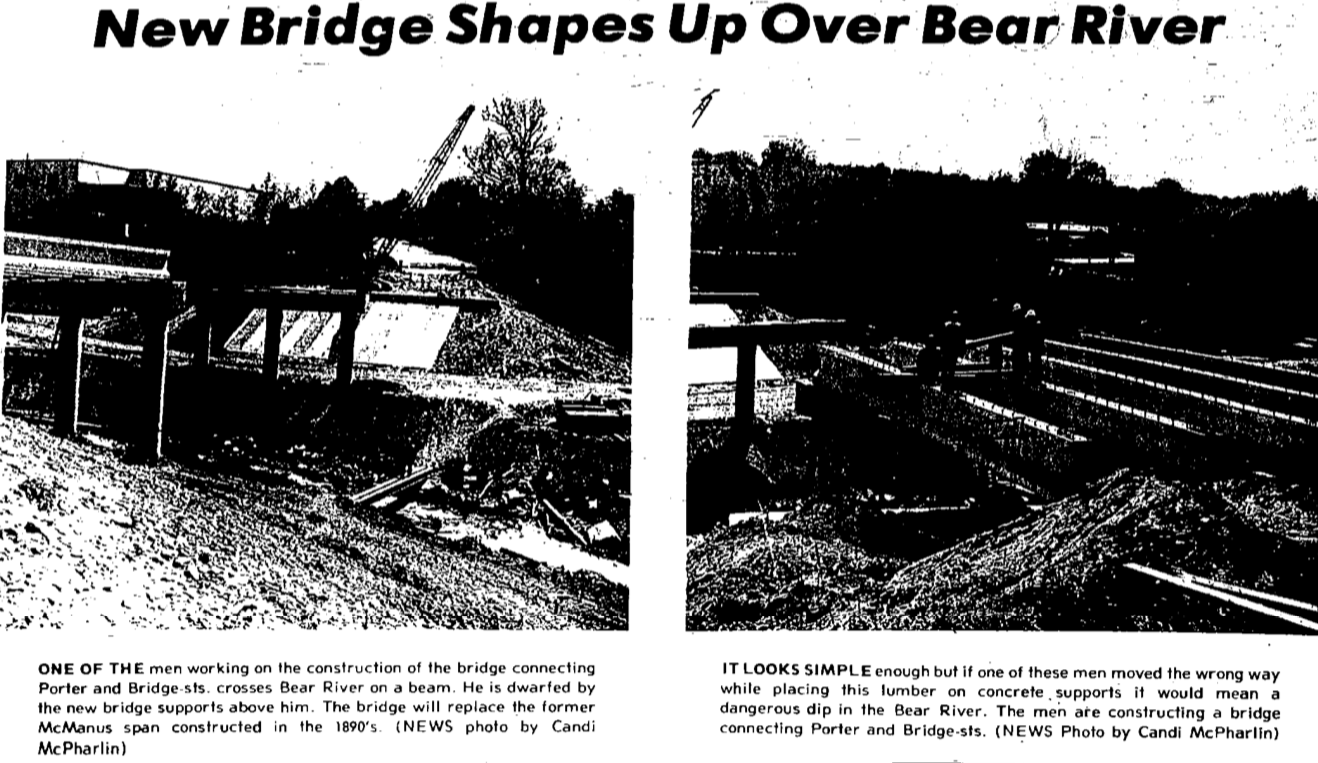 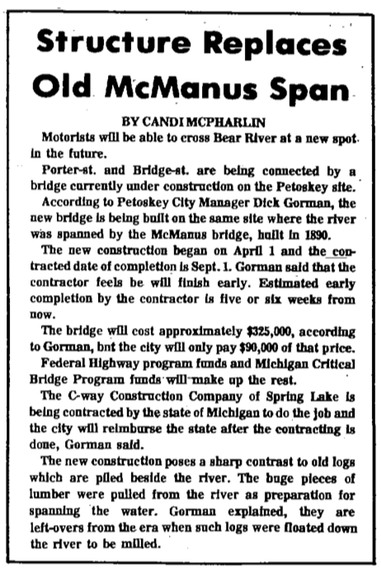 25 May 1976 ~ Petoskey News Review article continued from above...
Nine 1976 Photos Below: Building the Bridge Street Bridge
to replace the McManus Bridge that was torn down... 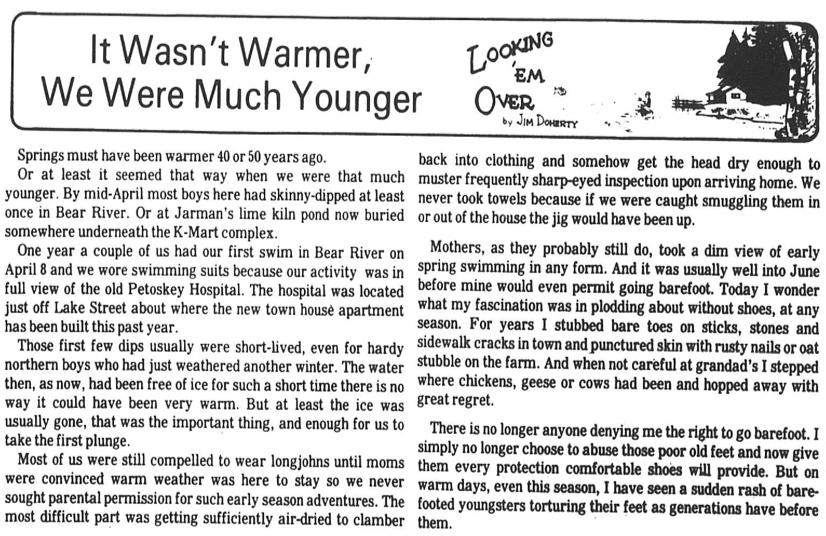 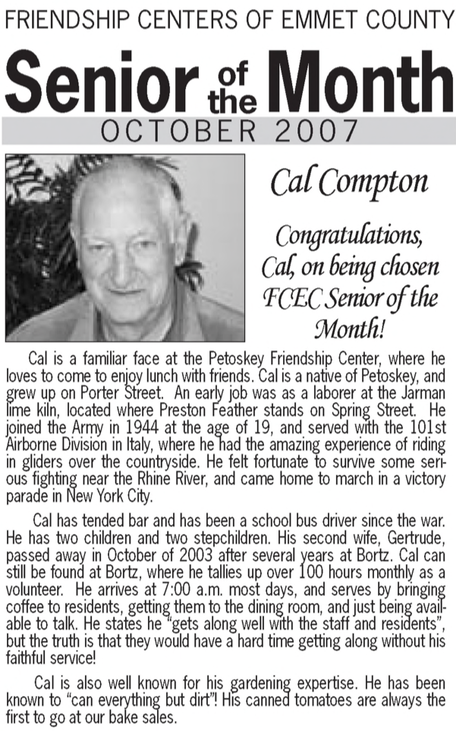 3 October 2007 ~ Petoskey News Review
2018
The Petoskey News Review 20 April 2018 issue reported: "Signs, barricades and construction equipment block the north end of the Bridge Street bridge in Petoskey Thursday. Construction crews closed the bridge to all traffic earlier this week as a project begins to replace a major joint on the bridge. Work on the bridge is expected to be complete by June 29. During the project the portion of the Bear River non-motorized recreational trail that runs under the bridge will also be closed most of the time." 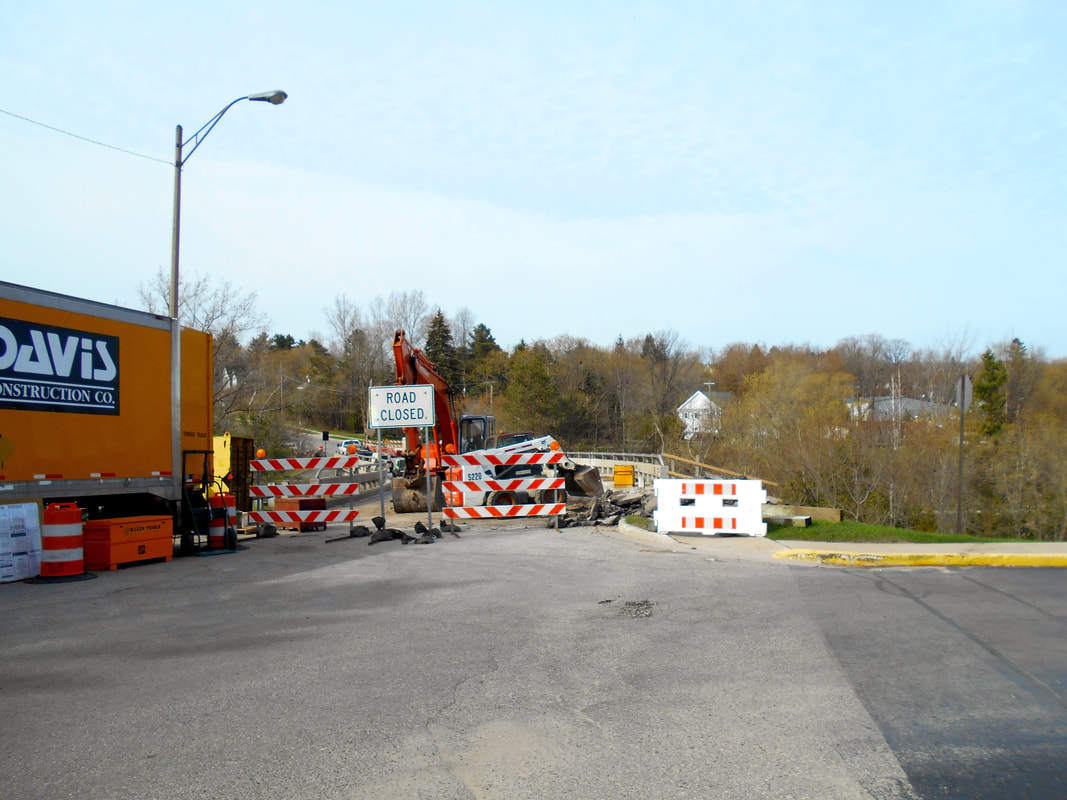 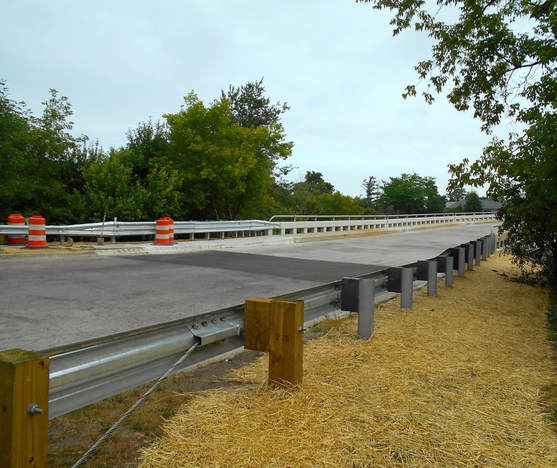