~ PUBLICLY SPEAKING ~
(EXERCISING my right to speak publicly can be a real workout!) 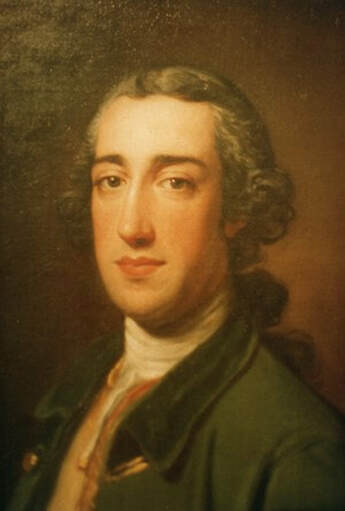 Robert Emmet Photo from Greenwood Photo Archive Collection (Undated)
I began attending Emmet County governmental meetings in 2008 or 2009 in which I was often reminded that the Public Comment [PC] section of the Emmet County Board of Commissioners [ECBOC] meetings was for just that... Public Comment, not debate,
nor in most instances, ANY reply by any of the commissioners.
It was often intriguing, however, to ponder just which of my public comments might generate a response.


Noting the minutes of the Emmet County Finance Committee meetings,
I, Karla Buckmaster, often was listed as an attending GUEST beginning in 2011.
Any comments I made at those meetings, however, were rarely, IF EVER, recorded as having transpired.


A comment I never made during a meeting, to an official, in an e-mail, or to anyone,
that I wish to make now, PUBLICLY SPEAKING... with no response needed:

In building your father's legacy... "He would have taught you better had he been granted more time."

This entire Northern Mich~Mash Preserve web site
was inspired by the following:
I had no idea until late summer of 2017 that my personal e-mail writings/comments regarding Emmet County, Michigan, governmental issues would be of such interest to the general public. I then learned that my personal e-mails back to 2012 written to a particular Emmet County commissioner had been FOIAd (requested through the Freedom of Information Act) and made public. I never have run for a public office nor held a position on a public governmental board or committee... nor do I wish for such. I wrote, then, as I do now... as a passionate private concerned taxpaying citizen.

Evidently, my writings/comments describing my various personal concerns and personal views about Emmet County governmental issues over the years are of interest to the general public, so with that in mind, I am including them here as I was, and am now, “Publicly Speaking.” The years of the following items begin about 2008/2009 when I first began attending Emmet County Board of Commissioners [ECBOC] meetings, and continue attending through the present.

My e-mails, of course, were not originally written to be publicly viewed, but any of my views, whether oral or written, concerning governmental happenings are basically summed up in an on-line supposed quote by Ernest Hemingway. When a reporter called to ask Hemingway if he could ask Hemingway questions over the phone, Hemingway replied:

MY e-mails... when I send them off, whether "politically correct" or not, like Hemingway... I mean them for good.

After the 2016 ECBOC election where six of the seven Emmet County commissioners were replaced, I am realizing that obviously, many of my fellow county residents had the same viewpoints that I had acquired, and have voiced, and written, over the years…  through Public Comments at governmental meetings and through e-mails (now public) that I have written to local county public officials.

After the 2018 ECBOC election, I am realizing that commissioners once again, needed replacement... three commissioners were replaced, although that was not enough. It may take two more years for the voters to realize they missed replacing all that needed to be replaced. Personal agendas and personal privilege should play no part in the holder of a public office... not to be viewed as a position of POWER!

"By Act number 67 of the session laws of 1843, page 145, entitled 'An act to change the names of certain counties," the name of the county of Tonedagana was changed to that of Emmet, and the name of the county of Reshkanko to that of Charlevoix.'" This quote is from The Evolution of Emmet County Feb. 23, 1914 ~ written by B.T. Halstead and read to the Emmet County Historical Society on February 23, 1914. Halstead's book may be found in the Michigan Room at the Petoskey District Library in Petoskey, Michigan. 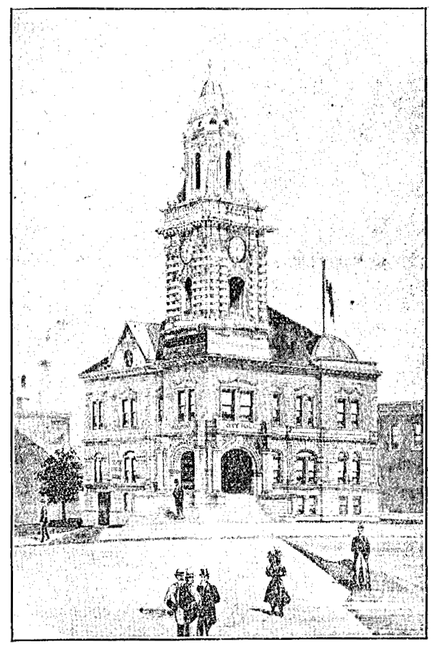 7 June 1901 ~ The Independent Democrat... text below from this article 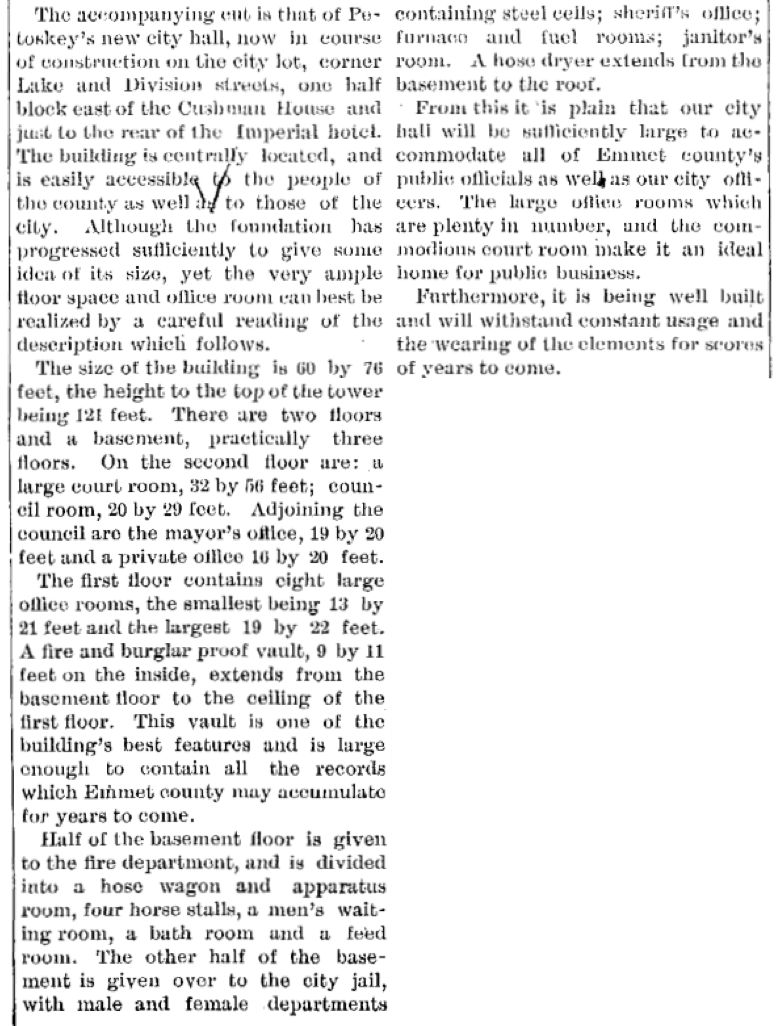 7 June 1901 ~ The Independent Democrat article accompanied the photo above 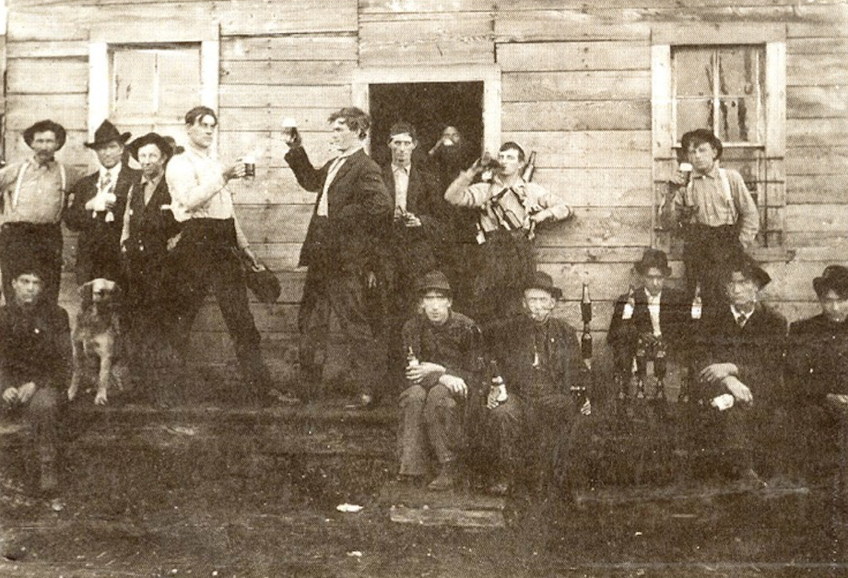 Squires Saloon was replaced by the Petoskey City Hall, and now is the location of the Emmet County Building on the corner of Lake and Division streets 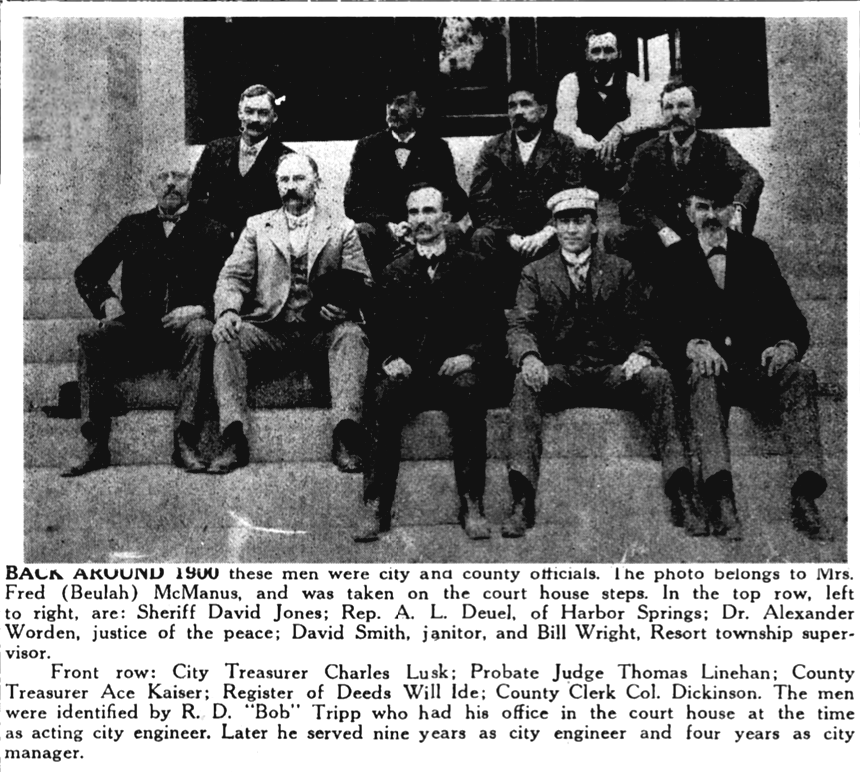 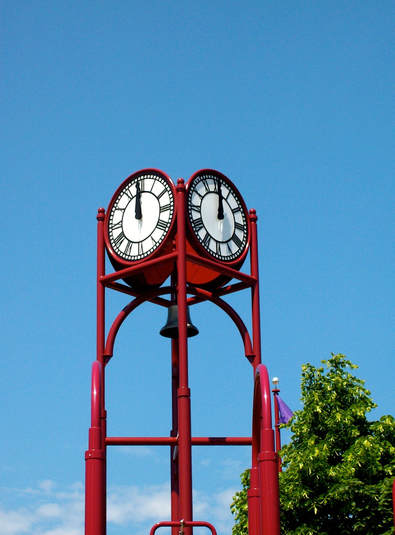 22 June 2008
For additional information and photos of the town's clock visit my website titled
"Charlevoix Emmet History" on the WWI Emmet County Military "With Connections to the Town Clock."
In 1965 both the city and the county shared facilities when it was proposed to build a new county building
on the corner of Lake and Division streets.
1965
~ City - County Building Combined ~ 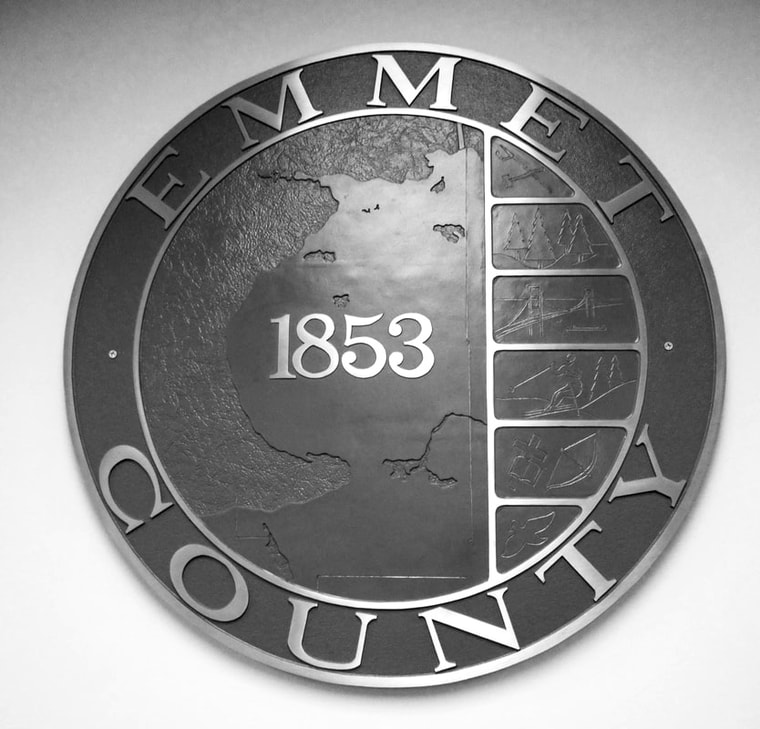 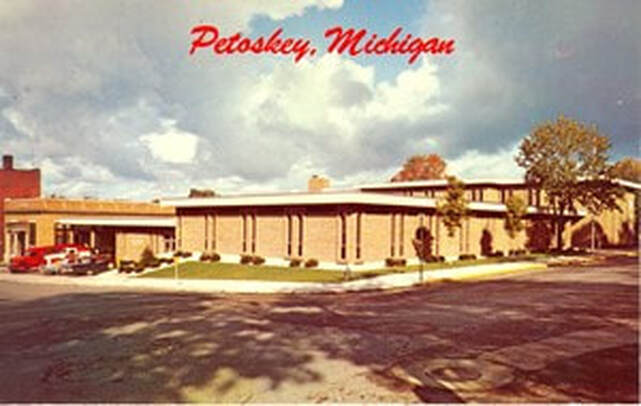 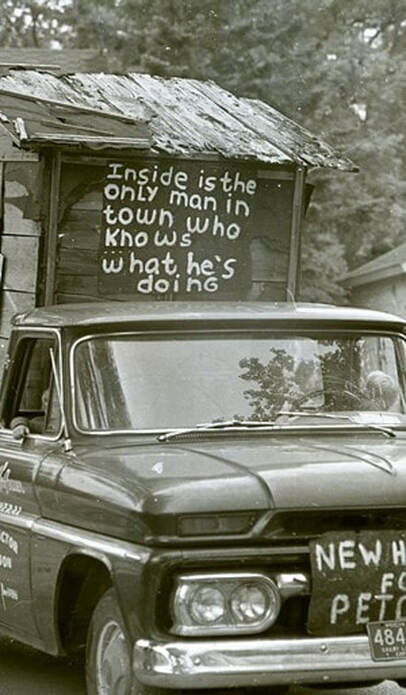 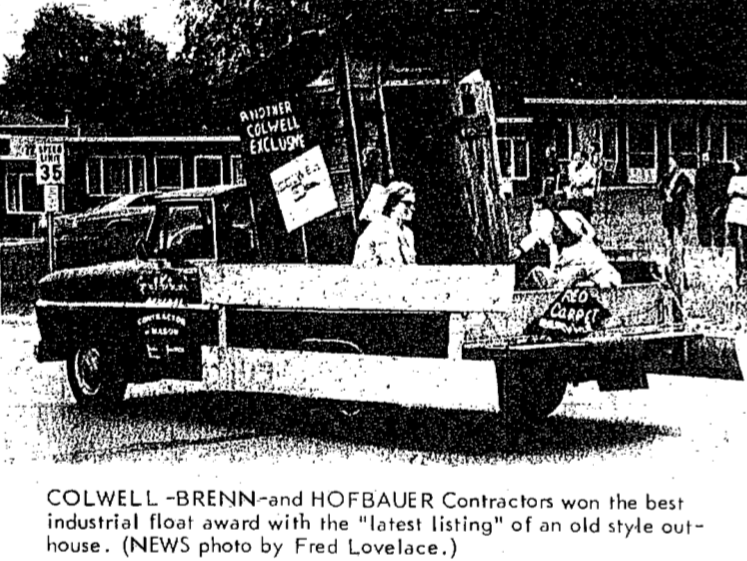 5 July 1967 ~ Petoskey News Review
NOTICE:
2018 – Please read the "Publicly Speaking" letter regarding the hasty vote by five of the Emmet County Board of Commissioners... (one unsuccessfully) trying to "buy" 2018 election votes!!! (CLICK)

IN ADDITION:
2019 – At least one of the Emmet County Board of Commissioners should be recusing himself when votes regarding the NLEA (Northern Lakes Economic Alliance) are presented. During the 2018 election campaign, a paid election event for this commissioner was hosted by a very verbal NLEA member and beneficiary. Now that commissioner who wishes to attain higher political office (Chatfield will be out with "term limits" in the coming cycle) at state level, is obligated to satisfy that verbal NLEA supporter to attain future election votes, whether the commissioner's county vote is in the best interest of the entire county general public, or not. He needs to recuse himself in those instances. [LATER UPDATE: Finally, in 2019 the majority of the ECBOC voted to free the county taxpayers from funding NLEA in 2020!]

Another sitting 2019 commissioner has a direct connection with a housing corporation, and a fellow friend/business associate with a direct downtown Petoskey development connection, and thus should be recusing himself with ANY votes having to do with housing, Brownfields, Land Bank authority, and associated financial input to housing in which he, a friend, or business associate, stands to gain personally.