In earlier years, Bay Bluffs was named "The Emmet County Medical Care Facility".
The design and compilation of the text and photos on this site are copyrighted 2017.
Most posted items will enlarge by "clicking" on them.
"Clicking" on some color highlighted words may access additional information.
Please do not copy the photos on this site, many of which have been submitted by private individuals...
just come back and visit the site often to view the photos.
Photo Labels Include: 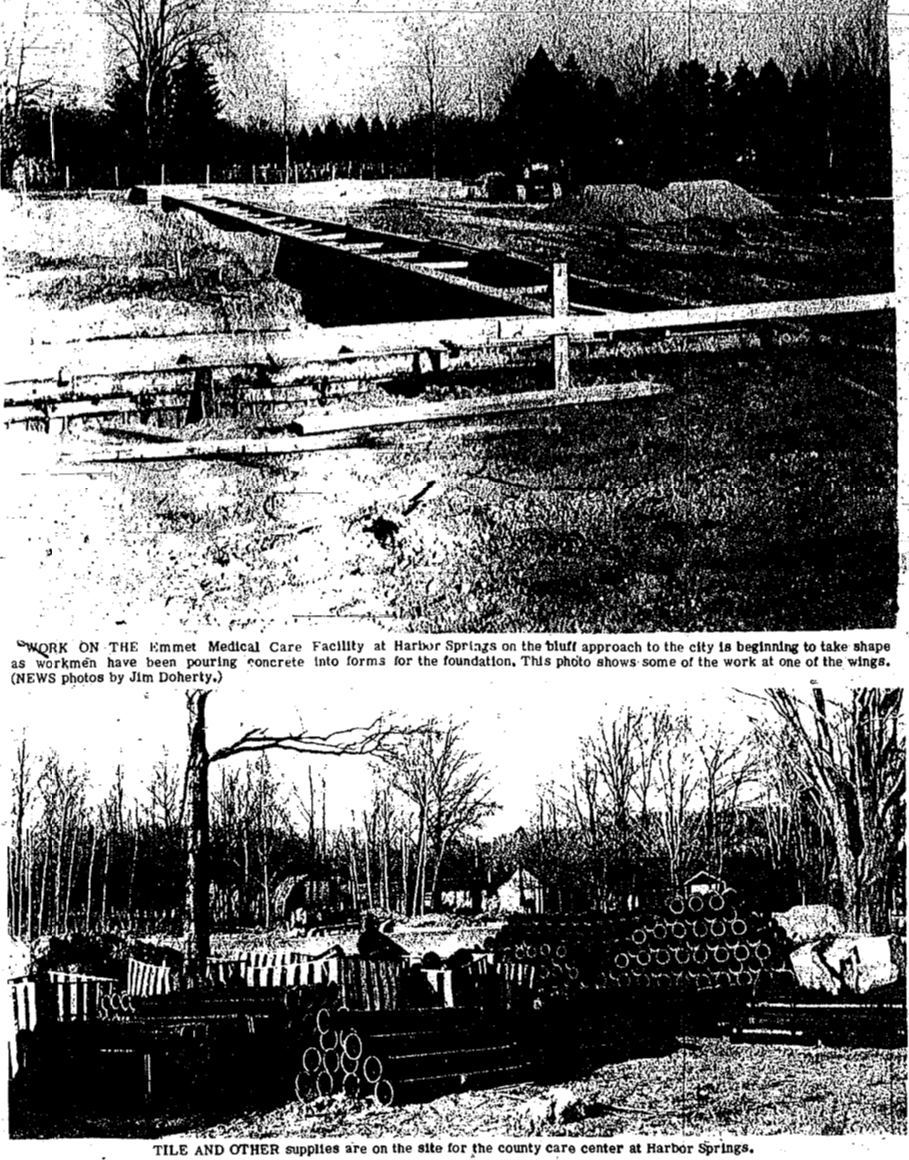 5 May 1965 ~ Petoskey News Review photos accompanied photo above...
One Wing of the County Medical Facility Beginning
1965 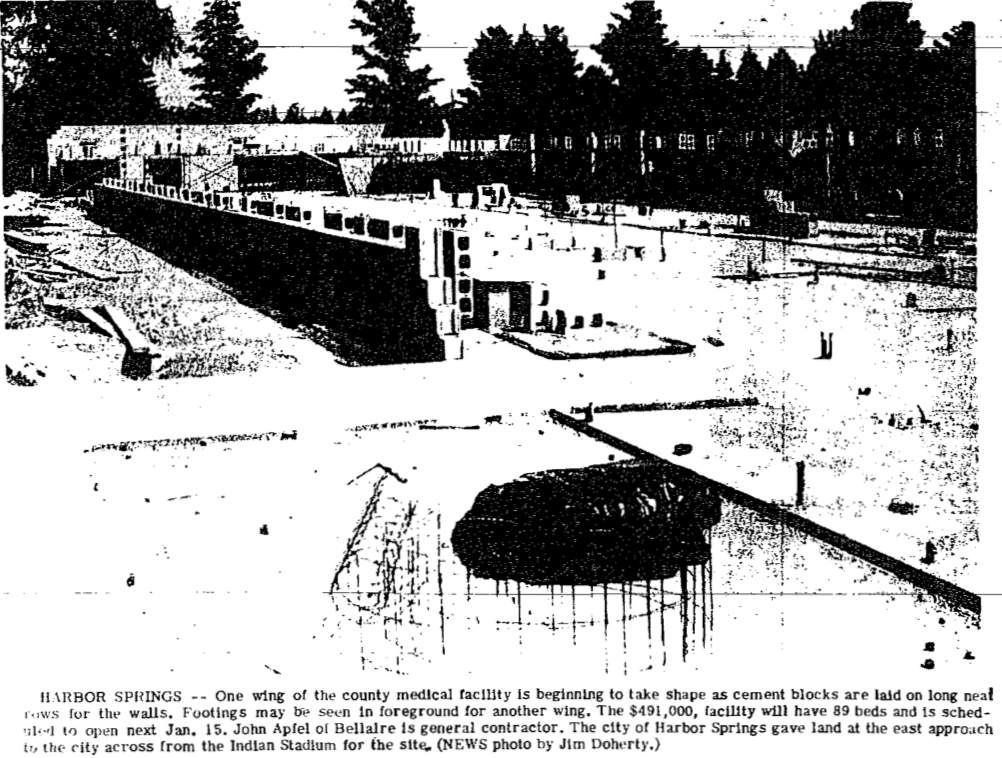 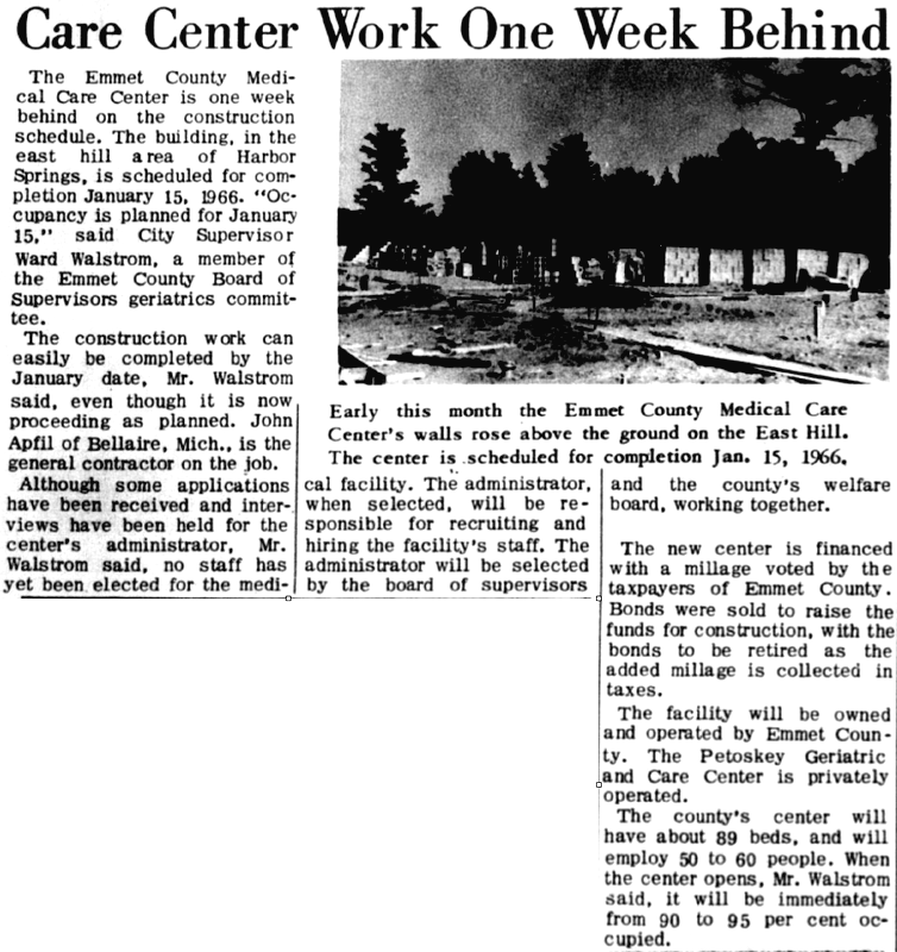 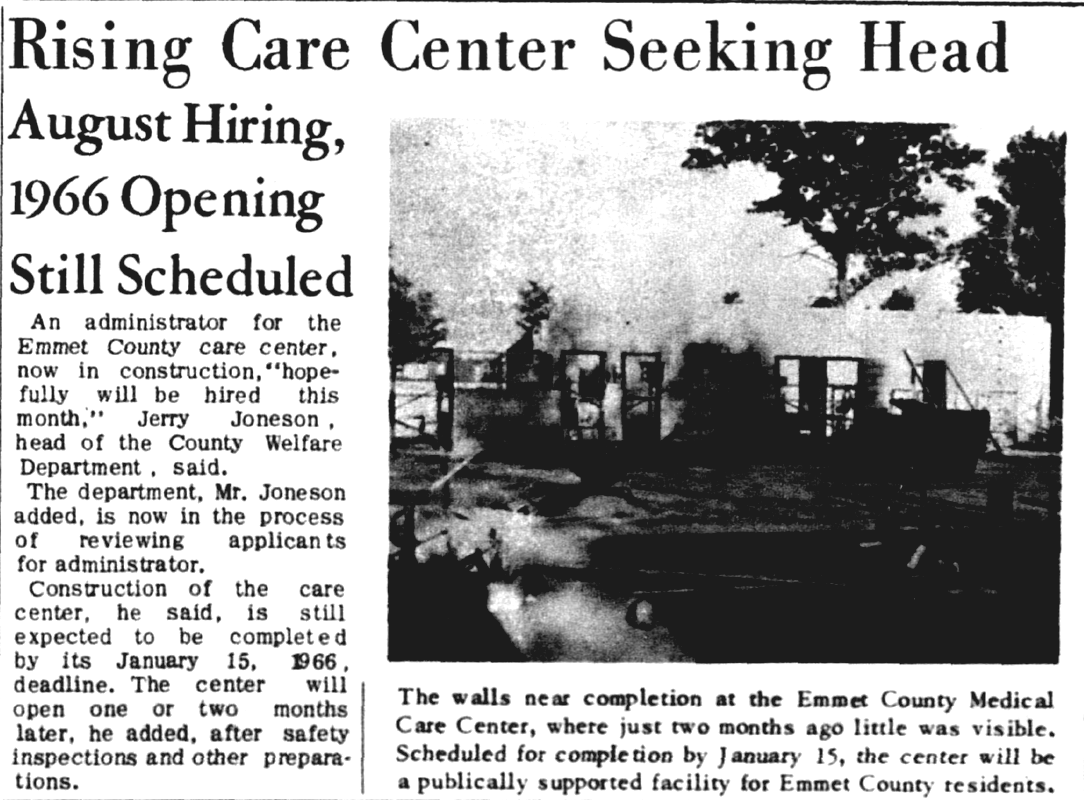 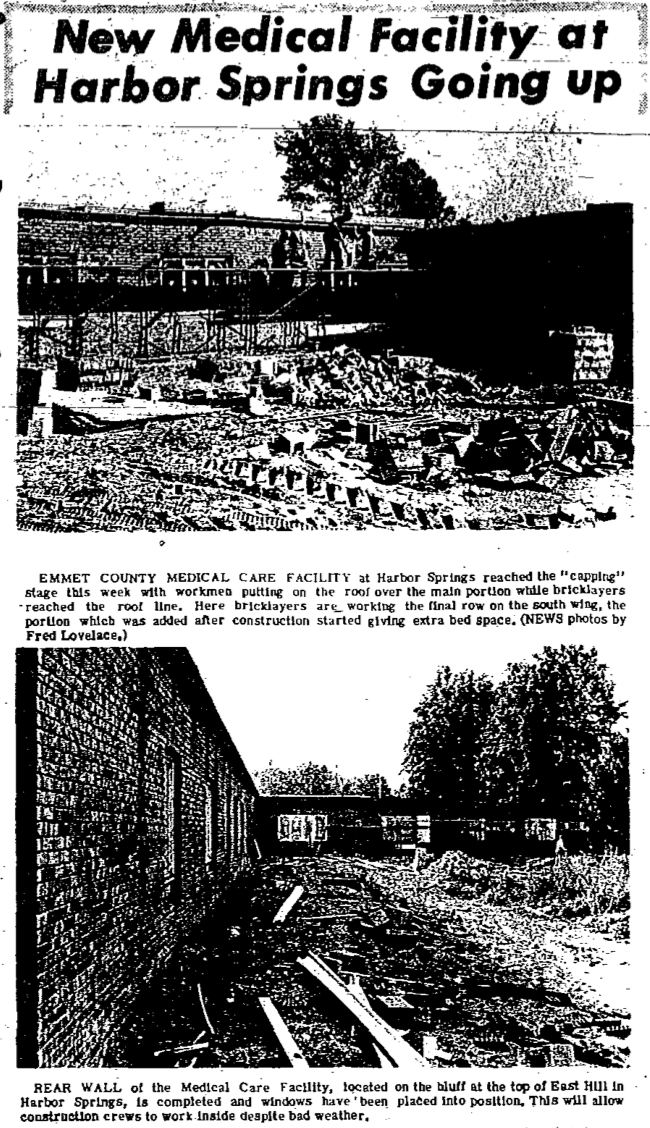 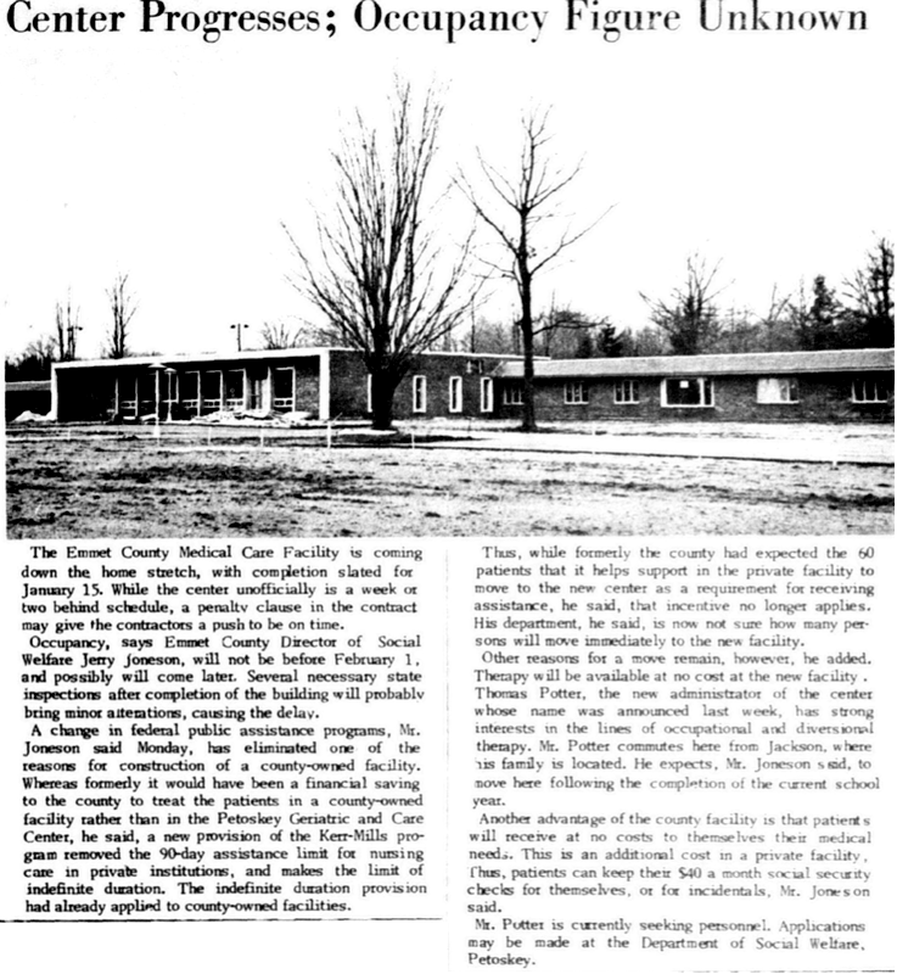 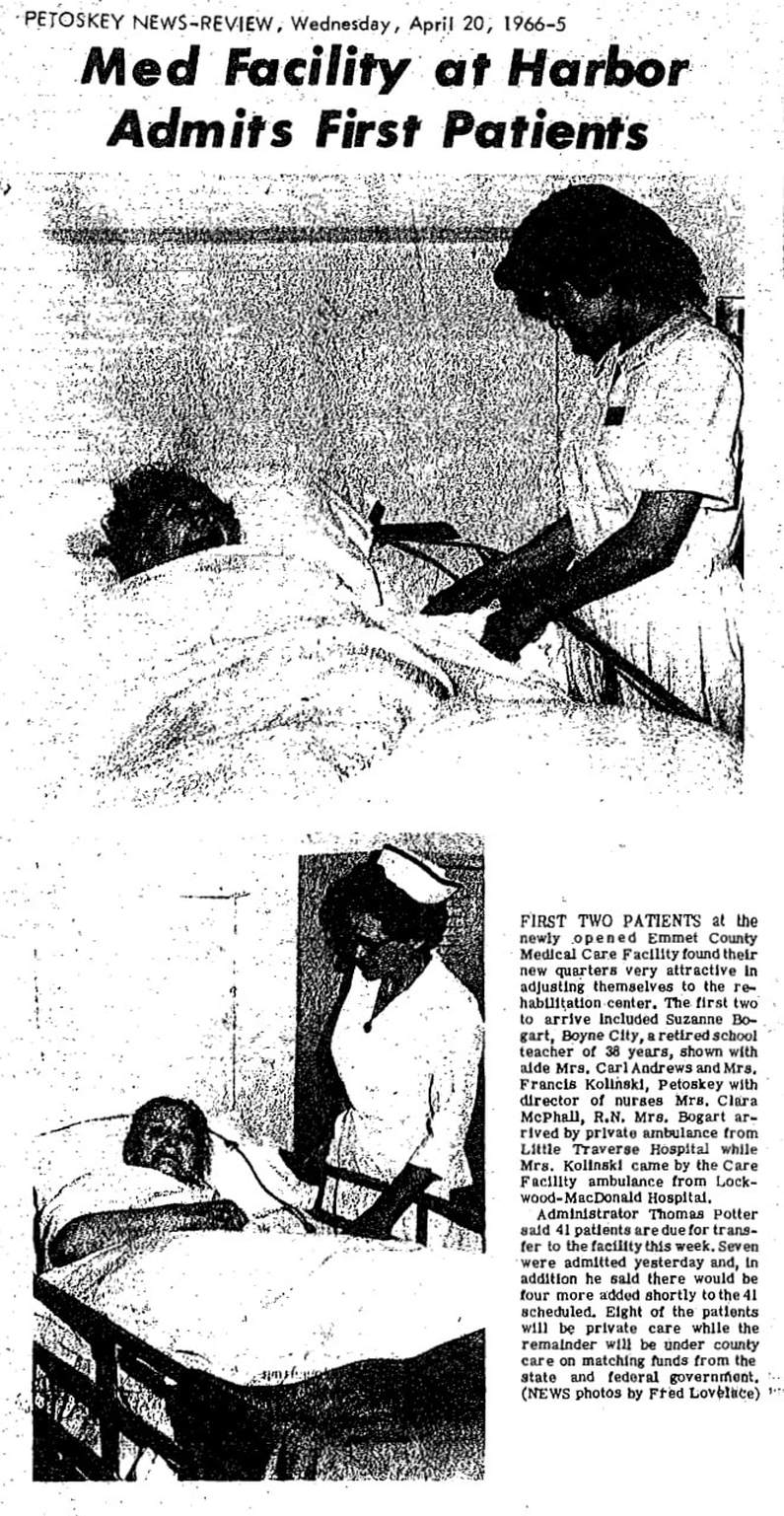 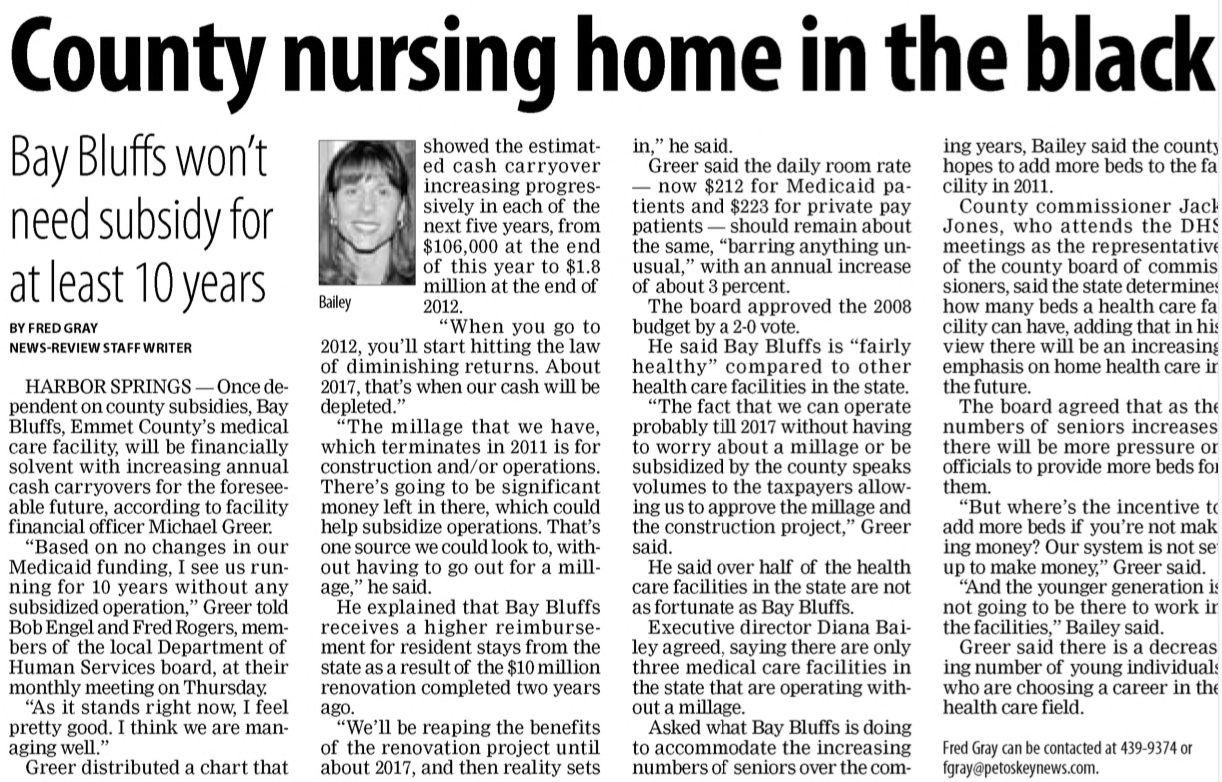 16 November 2007 ~ Petoskey News Review
5 December 2017 ~ Petoskey News Review: "A tax proposal to help fund capital improvements at Emmet County's Bay Bluffs medical care facility won't appear on the May 2018 ballot as previously proposed... The project would increase the facility's size from 64,000 square feet to 91,000 square feet, and provide more privacy for residents by providing more private rooms. The number of patients at the facility is not expected to increase." The proposed property tax millage would be for $20.8 million if it were pursued.
16 August 2018 Bay Bluffs Board Meeting

The Bay Bluffs board approved the new private pay rate per resident
of $308.00 per day effective 1 October 2018 (note increase below only one year later).
That equates to $112,420 per year out of pocket (private pay) per resident.

It is often mistakenly thought that because Bay Bluffs is a county medical care facility that when the time comes for a county resident to use the facility, that it will be automatic and free. Unless the person is Medicaid qualified, the person MUST use his own resources, referred to as "Private Pay" as in the $308.00 per day noted above, until their lack of finances allows the person to be Medicaid qualified. Legally, private funds cannot be "given away" to friends or relatives to make a county resident Medicaid qualified. Also, just because a person is an Emmet County resident does not mean the person is automatically accepted to be a resident of Bay Bluffs... a waiting list is often encountered with various acceptance criteria needing to be met. Neither does it matter that a resident has paid taxes which support Bay Bluffs... the "piper must be paid."
17 OCTOBER  2019 Bay Bluffs Board Meeting 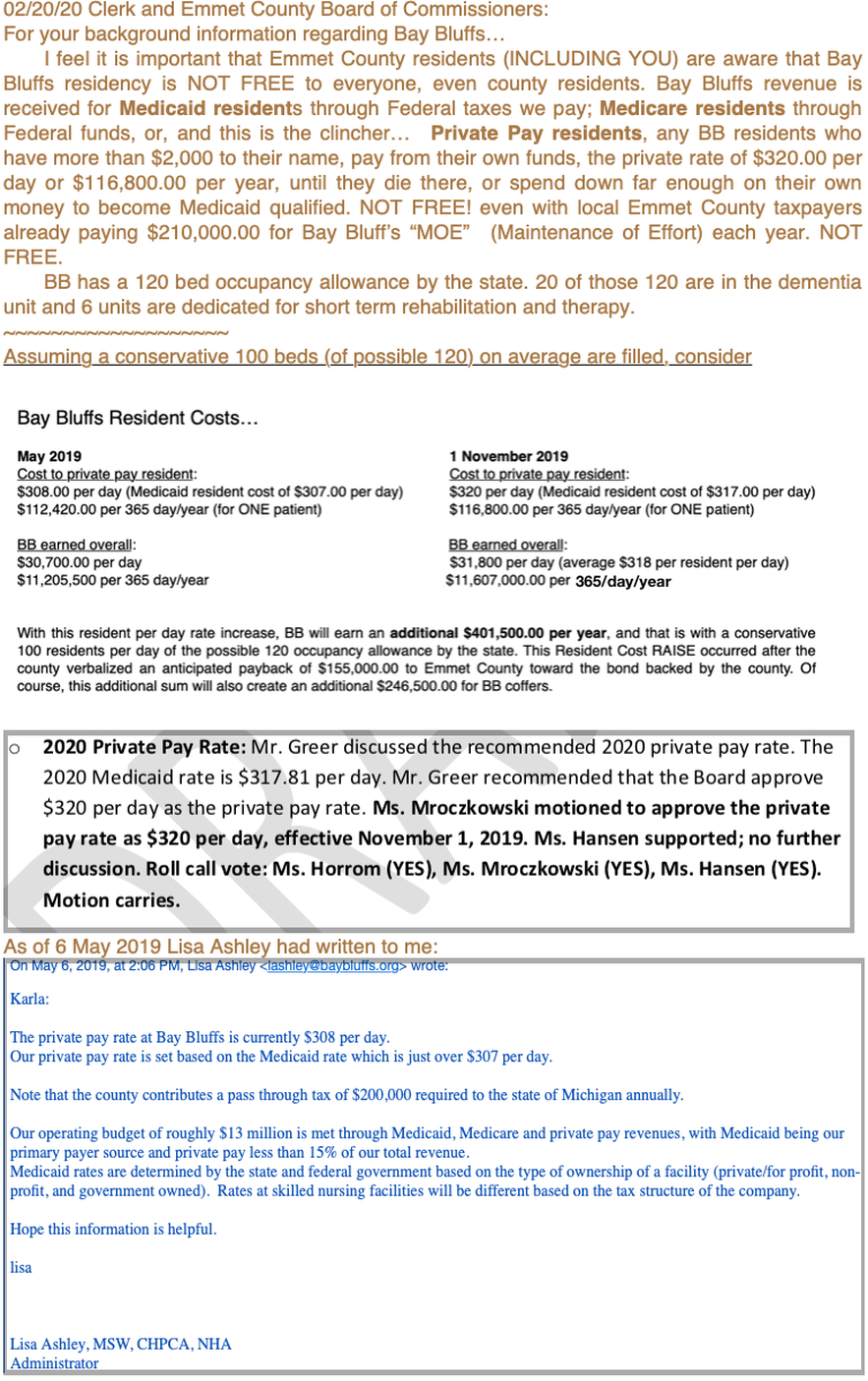 20 February 2020 ~ Read during the ECBOC meeting Public Comment
In 2018 the Emmet County Board of Commissioners approved a 1.3 million dollar
general obligation bond for Bay Bluffs... so with no vote of the people.
Bay Bluffs agreed to repay Emmet County $150,000.00 of the bond each year, BUT,
then in April 2020 Corona-19 Virus Hit...
In the 30 April 2020 Petoskey News Review, NOT to let a Pandemic go to waste,
the "Bay Bluffs director Lisa Ashley, indicates the situation means
the 'likelihood of paying (Emmet) County for (its) loan payment is slim in 2020.'"
Commissioner MacInnis is the liaison between the ECBOC and Bay Bluffs. He brought the following 21 May 2020 information (shown below) from Bay Bluffs forward to the ECBOC 18 June 2020 meeting as his report of Bay Bluffs happenings. Of course, no minutes nor public information has been posted on the Bay Bluffs "Meeting Minutes" web page since February 2020 DRAFT minutes for access by either the ECBOC nor the general public by June 2020! The announcement, however, that Bay Bluffs will not have enough funds to pay the county for the bonds that the county undertook on behalf of Bay Bluffs; even after Bay Bluffs raising an extra $400,000.00 through 2020 with daily pay rate for their residents, Medicare stimulus funds received by May of $260,000.00 and extra donations by May to their Bay Bluffs foundation of $30,000.00.

18 June 2020 ECBOC meeting attachment for 21 May 2020 Bay Bluffs "COVID 19 Pandemic Precautions, Response and Recovery"
Referencing above announcement stating that the possibility of a "millage will be necessary" should come as no surprise to anyone. That was the desire of the Bay Bluffs Director and Board even before the ECBOC undertook the issuing of bonds solely for Bay Bluffs, with no surety of repayment... if Bay Bluffs does not pay, then the bonding payments fall on the county taxpayers!!! Unreal decision making!