The design and compilation of the text and photos on this site are copyrighted 2017.
Most posted items will enlarge by "clicking" on them.
"Clicking" on some color highlighted words may access additional information.
Please do not copy the photos on this site, many of which have been submitted by private individuals...
just come back and visit the site often to view the photos.
Does someone have the ANSWERS to these local history QUESTIONS?
Contact the webmaster with the answer please (Include QUESTION number).
Click HERE.
You may also contact the webmaster with your own question.
1. Edward Seaman, of the Charlevoix Mineral Water Company purchased the Petoskey Bottling Works at Petoskey, Michigan, in 1911, and consolidated the plant with the one he owned in Charlevoix. WHERE was the Petoskey Bottling Works located?
2. Did a bakery, maybe Kilwins, exist on Petoskey Street, where all of the stores have been razed where "The Hole" is now in 2019? The same street, and block, that the old Temple Theatre was located?
3. Where is Page Creek located exactly? Access the "Page" web page on this same web site.
4. Where does the 4'x8' "Big Mac" painting by Ernest G. Patterson reside at this time? The painting can be viewed on this same web site on the "Mackinac Bridge" web page. The 1959 article stated it was to be hung in the "new" Petoskey city hall.
5. Where is the scale model of the Andrew Porter original Mission School, built by Earnest Priebe, from materials salvaged from the actual building. A picture of the school is posted at the very top of the "School" web page.
6.  Where is the model of the Mackinac Bridge as shown in the Petoskey News Review clipping of 24 June 1955 on this "Mackinac Bridge" web page?
7. What has happened to the Emmet County Flag as seen on the "Fairgrounds" web page?
8. It is thought the two photos above show a school (possibly a church) in Emmet County. Any information would be appreciated.
9. Where is this collection, or any of its pieces, of Indian quill boxes which were stolen from the Little Traverse Regional Historical Society Museum in 2019? See article below... 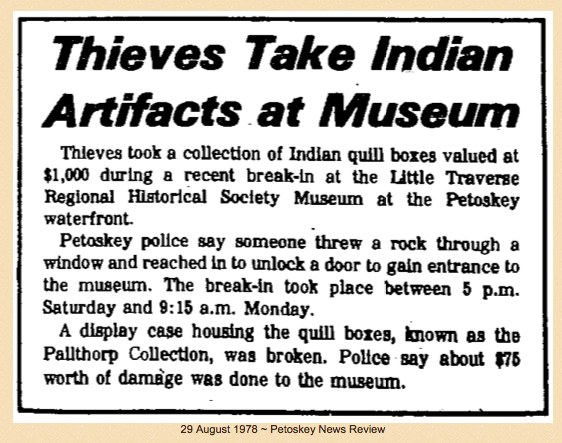 10. Article Below:  Was this Good Hart Baptist Church bell ever recovered, or where is it? 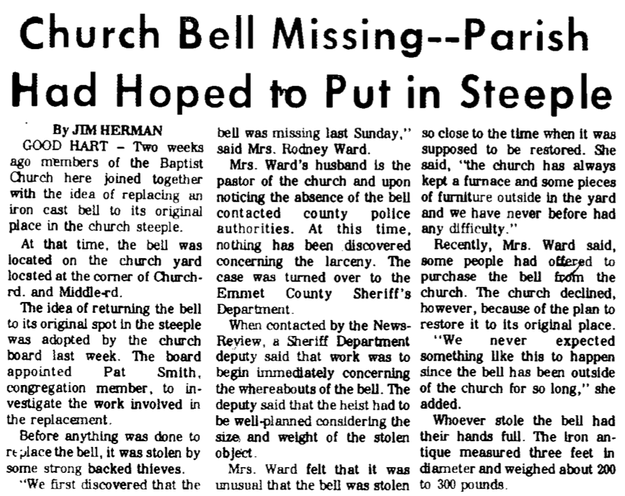 1 September 1970 ~ Petoskey News Review
11. A 1999 article located on the Art and Author web page on this same web site notes about Gustave Hildebrand that Hildebrand's painting of the former cement plant on US 31 shown in a photo on the Art and Author web page was put up for sale. It would be interesting to know where this painting has found a home; also, if any others of Gustave HIldebrand's paintings are in homes and being treasured.
12.  On the Flora and Fauna web page on this same site, a post card postmarked 1914 was labeled as "Swan Lake, City Park, Petoskey, Michigan." Where was this lake and city park located within the city? Was it where the 2019 Petoskey Winter Sports Park is located?
13.  What happened to the watercolor painting of Horton Bay's little Methodist Church painted by Mr. Rudolph Dahlgreen who lived across from the church? Mr. Dahlgreen painted it, and the community paid part of the charge for the painting and its framing costs. The framed picture, a wedding gift, was given to Ernest Hemingway and his bride Hadley Richardson who were married in that little church in September 1921. Mr. William Ohle talked of this on page 27 in his booklet 100 Years in Horton Bay Charlevoix County, Michigan 1876 ~ 1976 which may be accessed HERE.
UPDATE: It was thought when I came across this top photo below from the Little Traverse Historical Museum on-line photo of a previous display regarding Hemingway, that perhaps the museum had been given the sought painting. The museum brought out the displayed painting shown below, which I photographed in August 2019 the two photos at the bottom. The artist's dated signature of "Jack Appleton 1982" substantiates that this is NOT the original painting given to the Hemingways in 1921...
so, it is still a mystery; where is the 1921 painting of Horton Bay's Methodist Church? 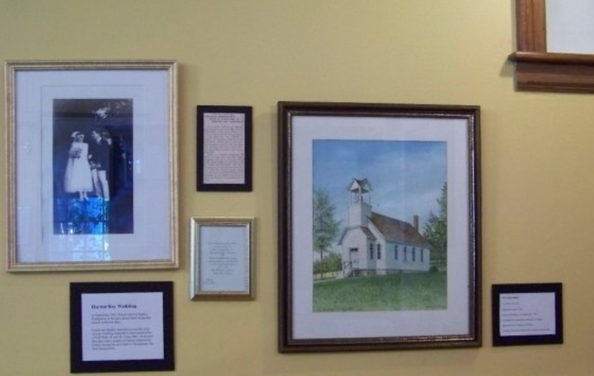 Photograph of a part of a Heminway display in the Little Traverse Historical Museum... 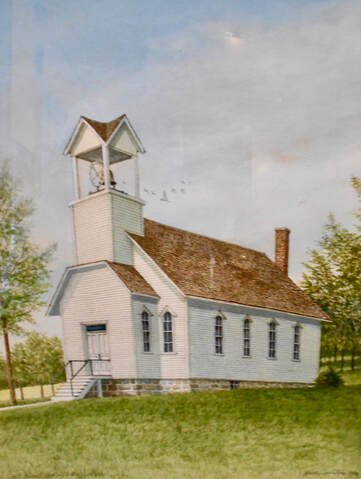 20 August 2019 ~ Close-up of signature and date of watercolor painting of the Horton Bay Methodist Church
14.  Where was the McDermott Blacksmith shop located in Petoskey? See additional information about this question as listed under 1955 on the "Vehicles and Bicycles" web page on this same Northern Mich~Mash Preserve web site.

ANSWER: From those who lived in that "West Side," the McDermott Blacksmith shop was located on Ingalls Avenue.
15. Is the scale model of the Original Mission School still in existence? It was built from materials of the original building (shown in the photo below) when the original building was torn down in 1952. See additional local schools information on this same web site by clicking HERE.
Photo Above Right: This clipping answers somewhat about where the Porter School model might be... Unlike as previously thought, it is not exactly a miniature model in size.
16. The 12 August 2016 Historical Commission Emmet County meeting minutes below indicate that EIGHT big fish had been donated to the county. WHERE are those eight donated fish located?

12 August 2016 ~ Emmet County Historical Commission meeting minutes...
17. MISSING: I last saw (and photographed on 9 May 2017 ) the TWO framed valuable historical items belonging to the taxpayers of Emmet County. I was shown the two items in the Conference room... by, then, County Administrator Krupa. Since that time I have asked to see where the items are because they are not showcased in the Emmet County building, but to no avail. Since that 9 May 2017 date, I have asked other county officials where the two items are, and the items are not to be found. Does anyone have any information regarding either/both of these two items as shown below? They had once hung in the lobby of the county building behind the then displayed cannon. That cannon has been disassembled and now is stored away where it is inaccessible to the public, although I was allowed to photograph the cannon "parts and pieces" in 9 May 2017. ~ Karla Buckmaster 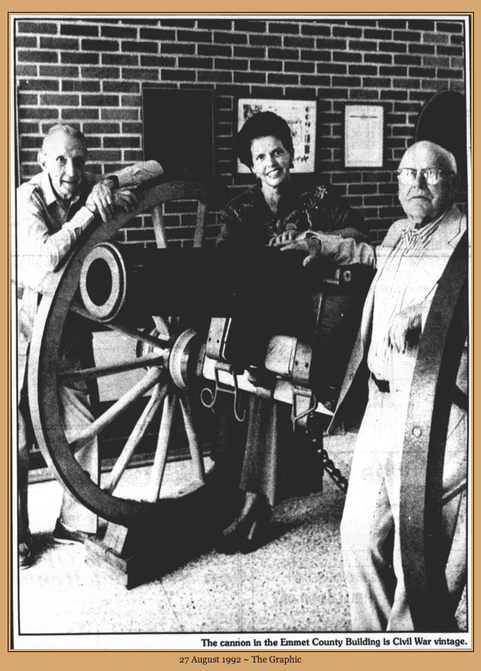 The photo above shows the two valuable items when they were hung on the wall of the then Petoskey-Emmet County Building lobby in 1992. In the photo are L>R: Reg Sharkey, Petoskey Mayor Barb Waters, and Bud Shulz who had restored the cannon to be displayed in the lobby. More information about the pictures and the cannon can be accessed on the "Cannons" web page of my Charlevoix Emmet History web site.
18. A rare referenced manuscript book painted in 1895 by Elfrida de Jaffa was donated to the local Historical Society in 1968 as noted in the article below. In January of 2020 the archivist of the Little Traverse Historical Museum searched for the precious manuscript, but it was not found. The museum was not created by 1968 so the manuscript may not have made it from the Historical Society to the Historical Museum. Does anyone know where this rare manuscript may reside? More information about the Countesses de Jaffa may be found on this same web site under "Art & Authors." 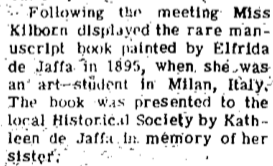 11 January 1968 ~ Petoskey News Review
The Countesses Kathleen and Elfrida de Jaffa also donated a valuable musical manuscript to the Petoskey Library. On 28 January 2020 the Petoskey District Library was asked to give an update with what is known about this manuscript. So far, nothing has been discovered, or at least, not shared that it has been found (see photo/text below). 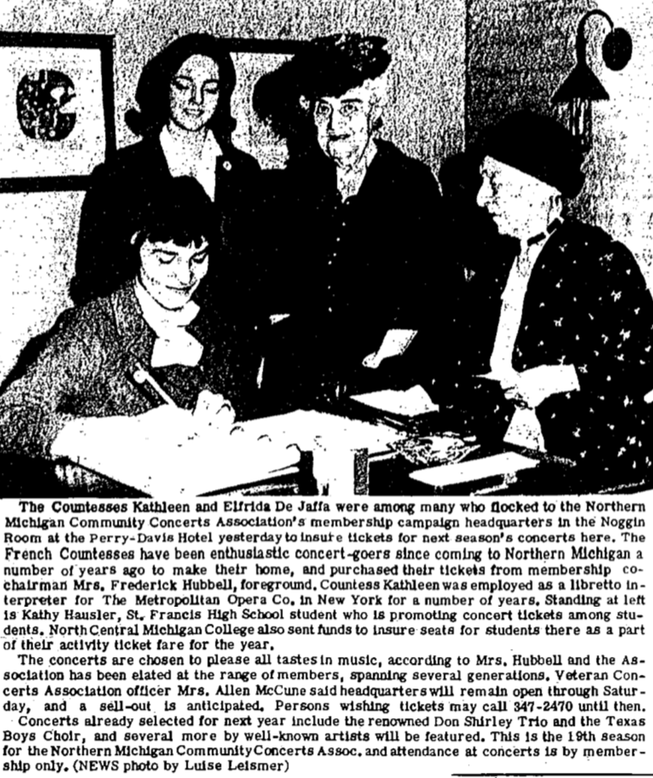 29 April 1965 ~ Petoskey News Review
19. This eagle and the scroll beneath once decorated the old Petoskey Post Office on Mitchell Street. This interesting and precious piece was obviously preserved near the entrance to the Little Traverse Historical Museum as in the photo below. In 2019 the scroll was haphazardly resting on the hillside behind the museum, but the eagle is no where to be found. Does anyone know WHERE the eagle is? Click HERE for additional clues and known information about this very special missing piece. 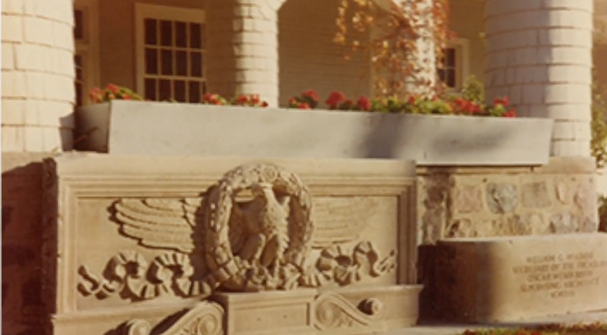