The design and compilation of the text and photos on this site are copyrighted 2017.
Most posted items will enlarge by "clicking" on them.
"Clicking" on some color highlighted words may access additional information.
Please do not copy the photos on this site, many of which have been submitted by private individuals...
just come back and visit the site often to view the photos.
Photo Labels Include: 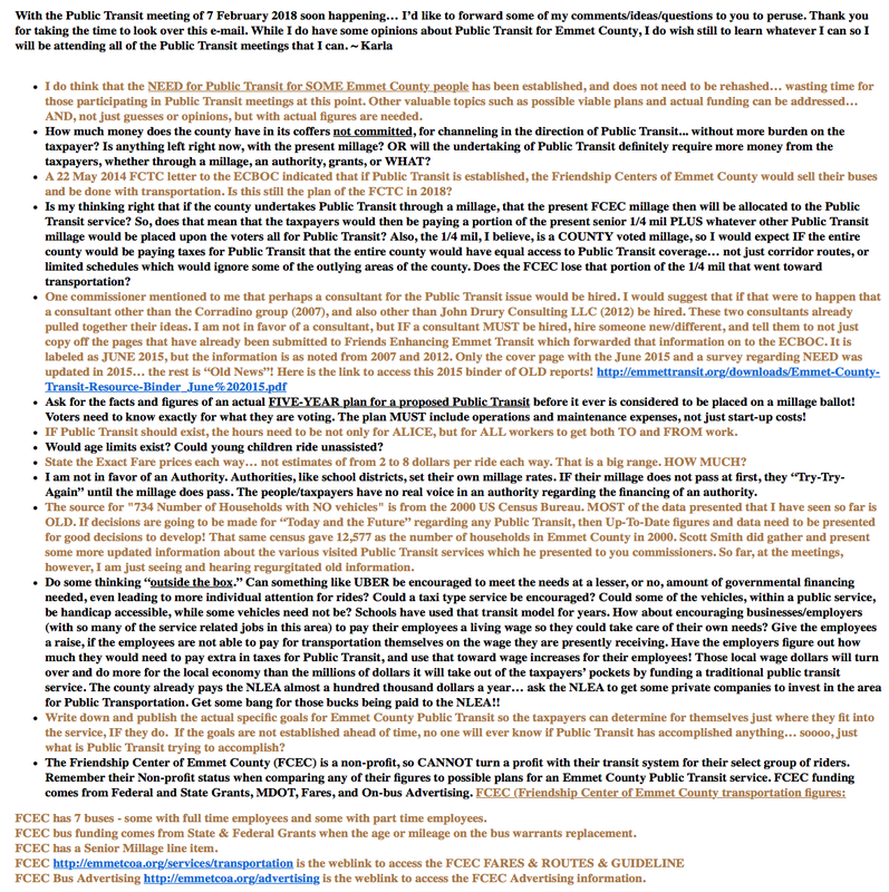 6 February 2018 ~ E-Mail sent to all of the 2018 ECBOC
The web pages on the above e-mail are not clickable... sorry.
~~~~~~~~~~~~~~~~~~~~~~~~~~~~~~~~~~~~~~~~~~~~
"BUYING ELECTION VOTES"
The letter below was read during Public Comment at the 19 July 2018 Emmet County Board of Commissioners meeting, but it was NOT allowed to be placed into the minutes as requested, so consequently is being posted here... PUBLICLY SPEAKING. The letter references actions by commissioners at the previous 9 July 2018 Committee of the Whole ECBOC meeting, just prior to the 7 August 2018 Primary Election in which ALL of the commissioners were placed on the ballot.

In Retrospect after the 7 August 2018 Primary Election:
Regarding the 7 August 2018 Primary Election, the electorate of District 5 must be complimented on their acumen of the situation of the "District 5 commissioner" trying to buy votes by PROMOTING and PUSHING through a 5-2 vote for "Public Transit." The resolution to move forward with Public Transit, with the closely followed vote was promoted during a COW meeting generally scheduled to discuss issues, NOT to vote on the issues. Evidently, as determined by the election results the commissioner did not "buy" enough votes to be reelected. The end result, however, is troubling for the taxpayers of Emmet County in that they have been saddled with an unfunded Public Transit program with no presented business plan. 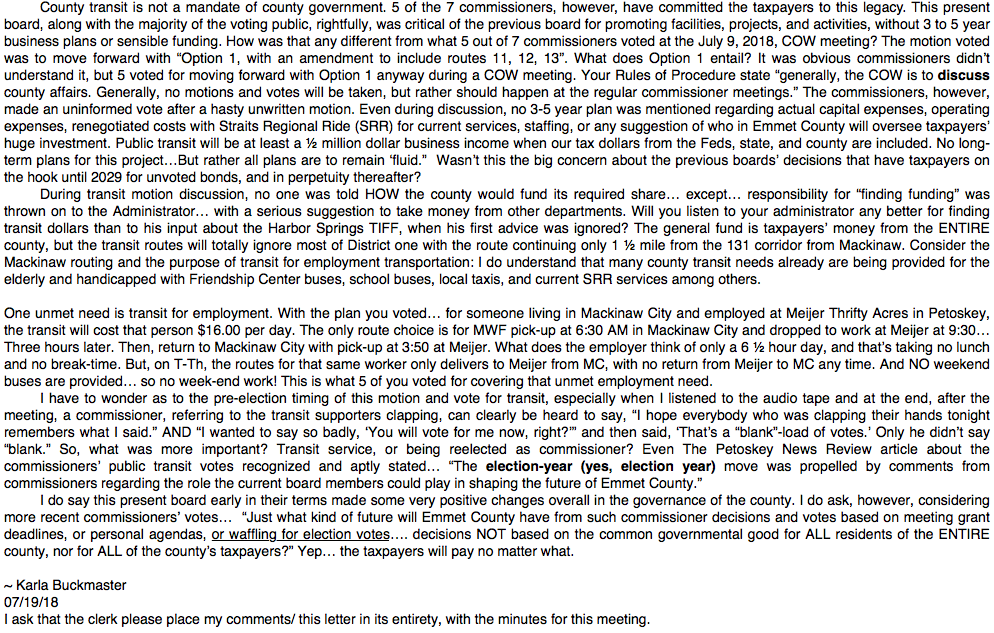 19 July 2018 ~ Read at the ECBOC meeting, but this was NOT allowed to be placed into the minutes.
Photo Below taken in the mid-morning hour: EMMET COUNTY TAX DOLLARS at rest... The only thing good about these THREE EMGO Emmet County Transit buses just sitting, not transporting, is that idleness is saving fuel, plus wear-and-tear expenses, for each bus. 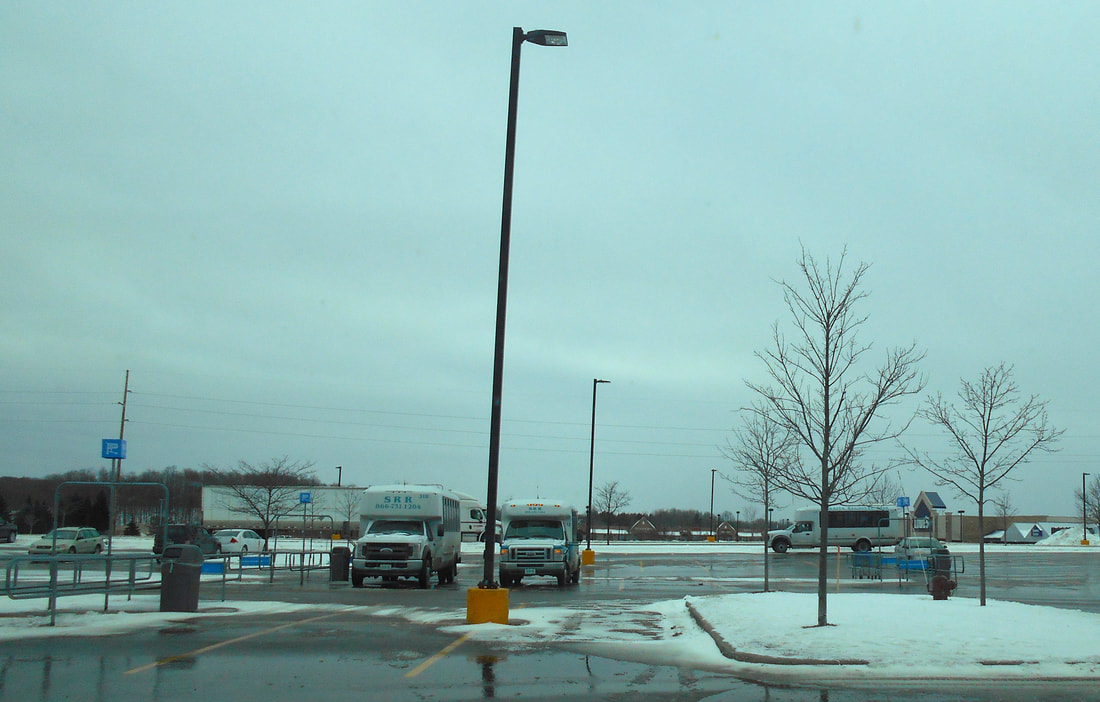 16 January 2019 ~ Walmart Parking Lot
THREE Photos Below were taken mid-morning on 4 March 2019, upon seeing the same site on many previous days, with THREE Emmet County Public Transit buses sitting in Petoskey's Walmart parking lot... one driver was standing outside talking to another driver, and two drivers were sitting behind the wheels of the stopped buses... with no passengers. This time I made it obvious that I was taking these photos. Photo #2: So, by the time that I drove behind the empty buses, two of the drivers knew they should be on the move. Shortly, it was seen that the two buses truly had moved, and parked, in the Lowe's parking lot, close to the Walmart parking lot. Photo #3: By an hour later in driving by the Walmart parking lot again, two empty Emgo buses were back in their favorite location.

At night the buses are parked at the Emmet County fairgrounds. So the county parks and recreation budget is used to pay for snow removal for the Transit System.

As the months have progressed, the buses have found various places to PARK... like in the parking lot for the Bear Creek Township Hall on Division Road, Petoskey, Michigan. 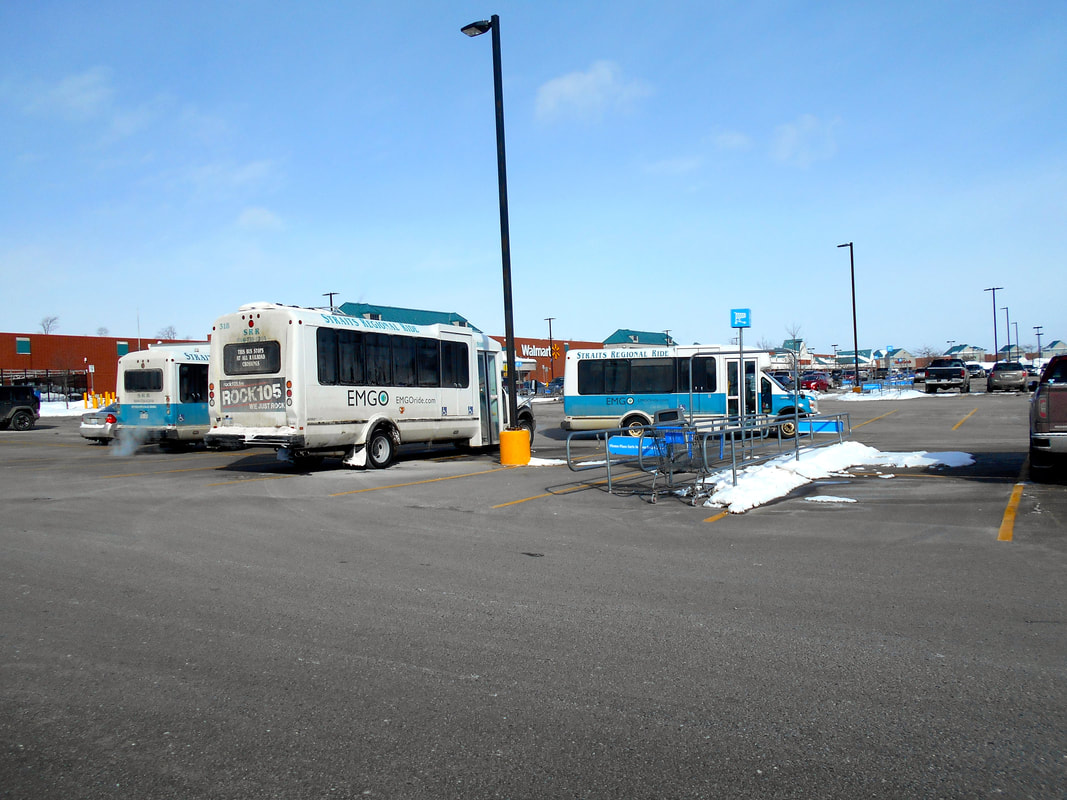 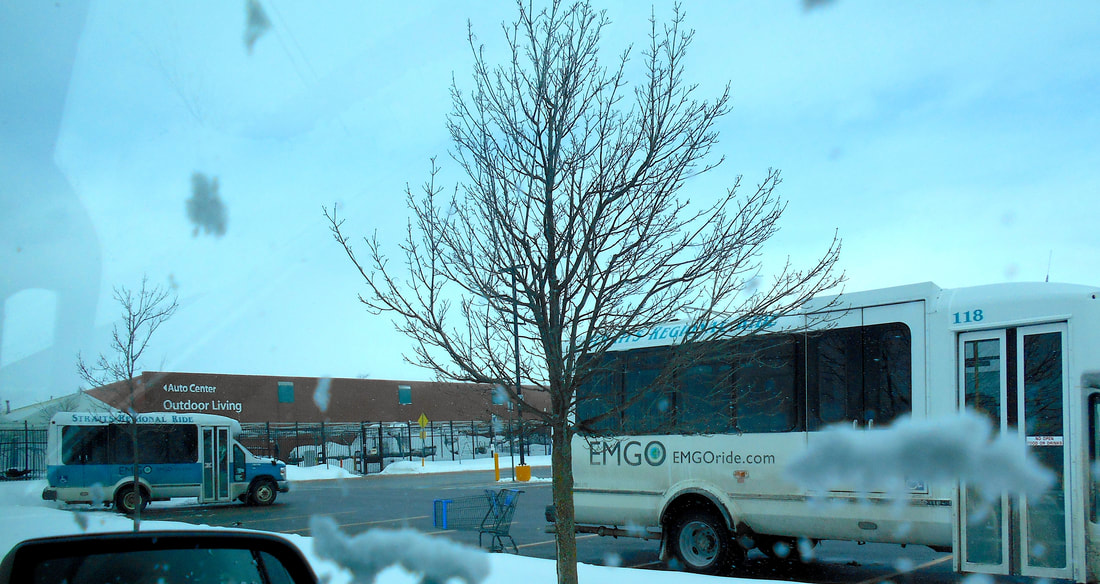 4 March 2019 ~ Walmart Parking Lot #3
When the county EMGO transit system was voted in 2018, no plan was in place, nor any funding. So, the county's administrator, with no staff for transit, had to juggle the budget, taking about $240,000.00 from other departments for year 2019. The county, already in "dire straits" because of budgetary restraints from previous board decisions with a 2014 non voted $15 million dollar bond for the Headlands, EMS, and various other sundries, also received state and federal money for the transit system. By the time all funding went into EMGO, about a half million taxpayer dollars, are supporting EMGO for ONE year in 2019.

The original commissioners' goal was for the original Emmet County Straits Regional Ride ridership number of 6000 per year, to increase with the THREE additional routes, by another 12,000 by the end of 2019, equaling a total of 18,000 riders. With the ridership number of about 200 to 617 for each of the first three months of 2019, it seems almost impossible to reach the 18,000 goal by the end of 2019. Vouchers purchased by United Way may help the ridership numbers cause; and also North Central Michigan College purchasing $2,000.00 of vouchers may help the ridership number cause. Taxpayers NCMC voted millage money for education, should not be paying for transit, however, when county tax dollars are already supporting NCMC... double-dipping of local tax dollars is not acceptable. Bear Creek Township taxpayers voted a supporting millage for the Petoskey District Library. By April 2019 the library was giving away EMGO vouchers for those wishing a ride to, or from, the library... another instance of taxpayers in Bear Creek township paying TWICE for the same service.

Below: This was the chosen OPTION by the Emmet County Board of Commissioners. It does state that 12,000 ADDITIONAL rides should be provided in addition to the about 6,000 rides/year that SRR has continued to provide at an additional $13,000.00 of Emmet County taxpayer expense, like in previous years. The total ridership from January through May 2019 has been only 4,213... not even the 6,000 rides/year in the original agreement. 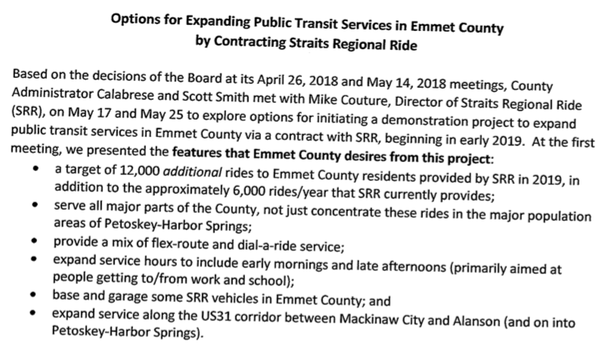 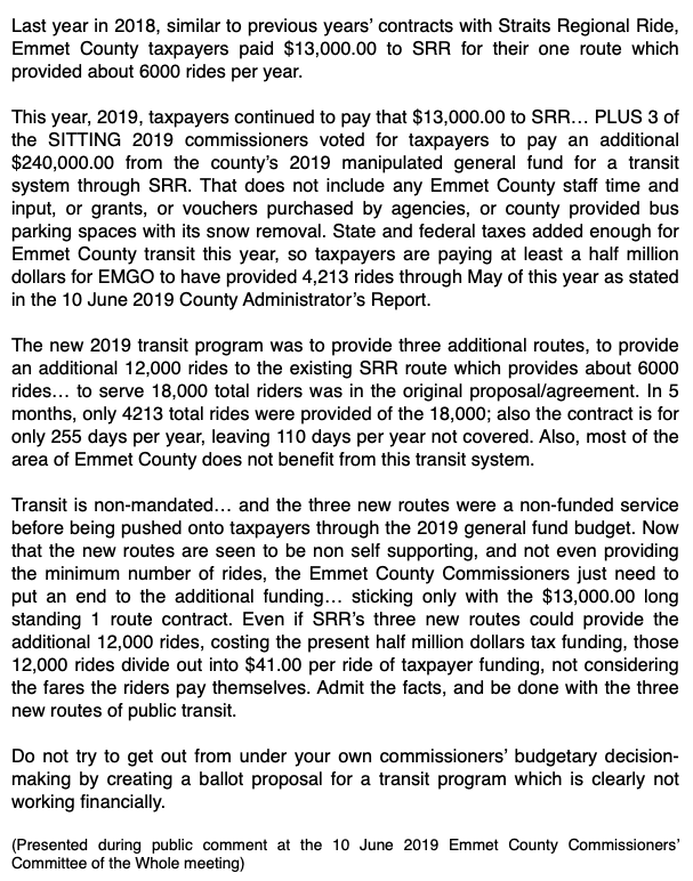 10 June 2019
~ Main Traveled Routes for EMGO Buses in 2019 in Emmet County ~
Taxpayers from the entire county pay for public transit bus service,
but the route coverage is extremely limited for many in the county.
Main traveled routes are shown in yellow on the map. 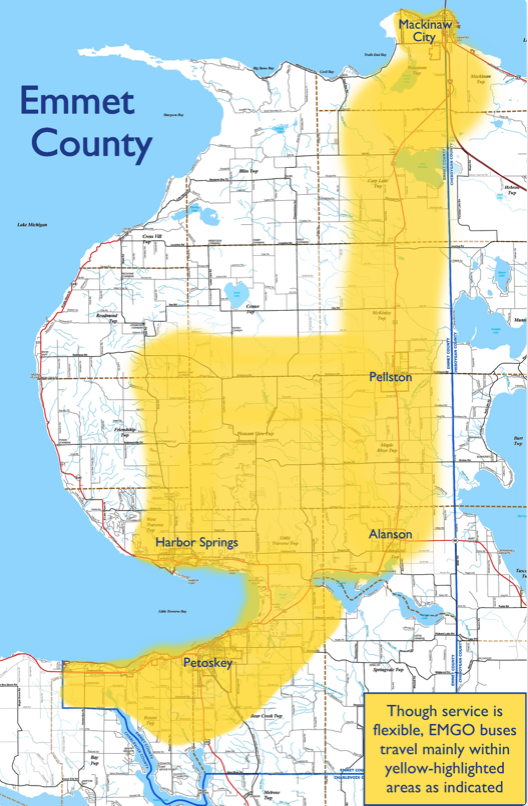 Main Traveled Routes for EMGO Buses in 2019
PHOTO BELOW: When I drove both directions past this bus… no driver was behind the wheel; the side door was wide open toward the water as seen in the photo below. Only one person was in the bus and that person was sitting about 3 or 4 seats behind the empty driver’s seat. Hmmmm… what a job! And, how lucky I feel to be the taxpaying employer of such.... yes, that is sarcasm! 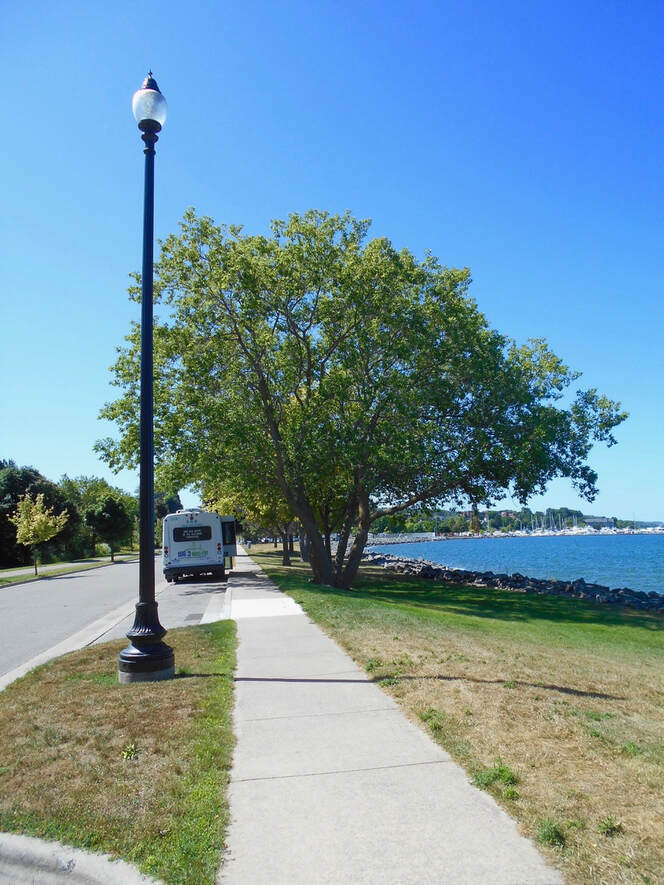 5 December 2019 ~ EMGO Cigarette Break Time in Meijer Parking Lot
The rider numbers are being manipulated. In the past the Emmet County Friendship Center bus transported seniors, disabled, AND general riders. According to FEET 9 December 2019 minutes, with EMGO in service, ECFC is only servicing seniors and disabled. ECFC now have about 16,000 riders annually. This count is down about 4,000 (not all due to EMGO, but possibly some). EMGO numbers become enhanced by EMGO's promotion of special Fall Color tour groups, as well. No concern is paid for the supposed original NEED for public transit, just get on that bus and RIDE... numbers are so important.
Two Pages Below: 19 March 2020 ~ Acting Administrator Mike Reave's report
to the Emmet County Board of Commissioners after a meeting with Cheboygan Transit... 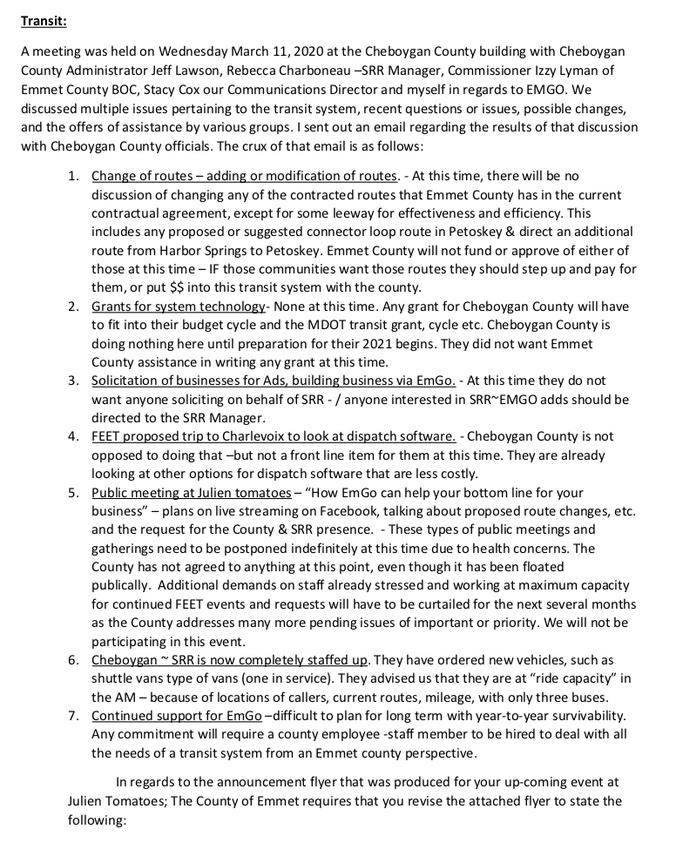 19 March 2020 ~ Acting Administrator Mike Reave's report to the Emmet County Board of Commissioners after a meeting with Cheboygan Transit... continued below 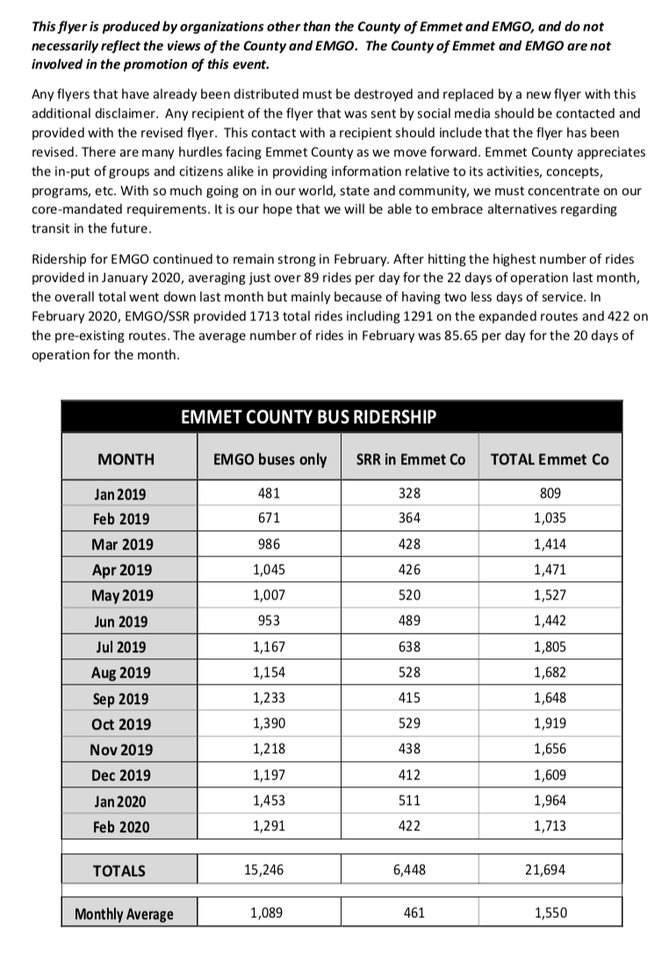 19 March 2020 ~ Acting Administrator Mike Reave's report to the Emmet County Board of Commissioners after a meeting with Cheboygan Transit... continued from above [Figures are for FOURTEEN months, not twelve months]
Administrator's Report Below:
COVID–19 has taken its toll on EMGO ridership for the month of April 2020,
even with no charging per ride. 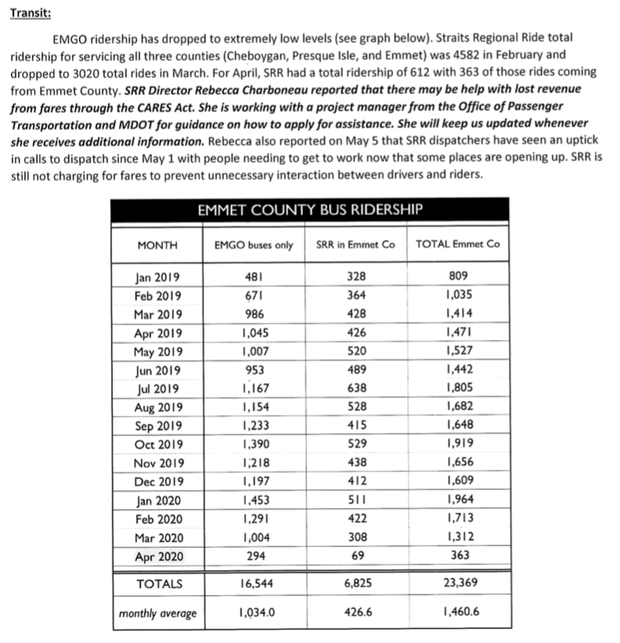 Emmet County Administrator Mike Reave's Administrator's Report for 11 May 2020 ECBOC meeting...
The 13 May 2020 Petoskey News Review reported "Emmet County to Suspend EMGO Routes Temporarily"... for at least 30 days (from May 15 to June 15). COVID–19 is noted as one of several factors in that decision. Cheboygan County heads the public transit for Emmet County, and Cheboygan had already indicated it is heading for a "likely scale-back." Cheboygan County had noted in its 14 April 2020 Finance meeting's Administrator Jeff Lawson's update that Straits Regional Ride did receive six (6) new buses.
On 8 June 2020 four of the seven Emmet County commissioners voted to reopen the EMGO bus service after a temporary month-long halt due to COVID–19 effects. The county commissioners, however, have had no specified funding for this bus service, even from the inception of the county transit; Just this one Emmet county bus service already costs annually over a half million dollars in Federal, State, and Emmet County taxes. Being an election year, explains why four of the commissioners continue to vote to support an unfunded non-mandated service. The taxpayers will have to cover their personal agenda votes, and pay in the end. Administrator Reaves is seeking extra monetary support from Petoskey and Harbor Springs governments... because MOST of the rides are in those areas. That was the misdirected precept from the beginning that the entire county would give tax support for a bus service mainly for the two localities... forget the needs of the rest of the county.
The 11 May 2020 Emmet County Board of Commissioner meeting minutes below reveal that COVID–19 affected the ridership for EMGO and SRR in Emmet County. It is interesting that although taxes pay for the Emmet County Public Transit, the SRR Director will be seeking more governmental money (taxpayer dollars; not FREE) through the CARES Act. 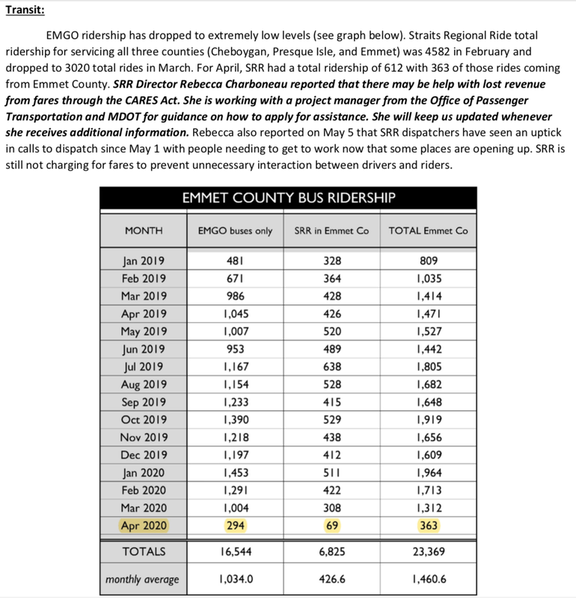 11 May 2020 ~ Emmet County Board of Commissioner meeting minutes
The 21 May 2020 ECBOC meeting revealed some of the
discussion that transpired regarding the public transit. 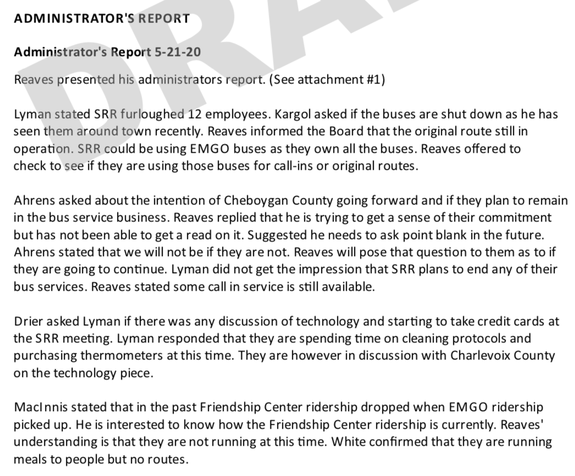 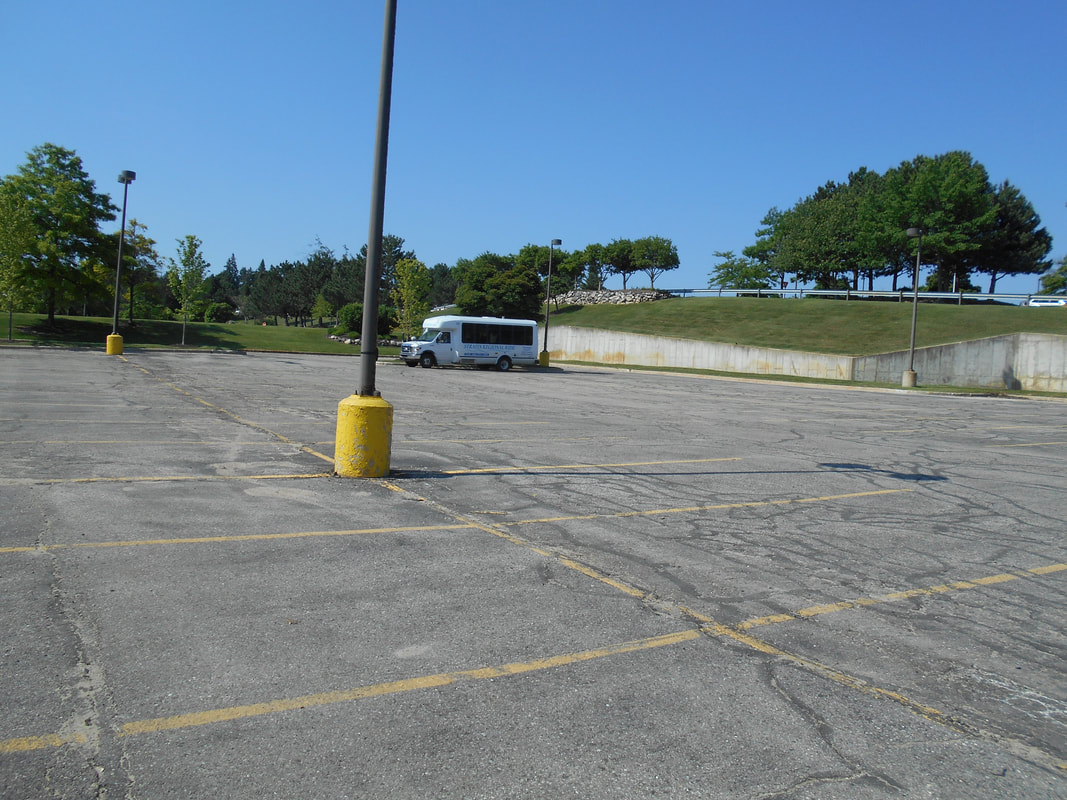 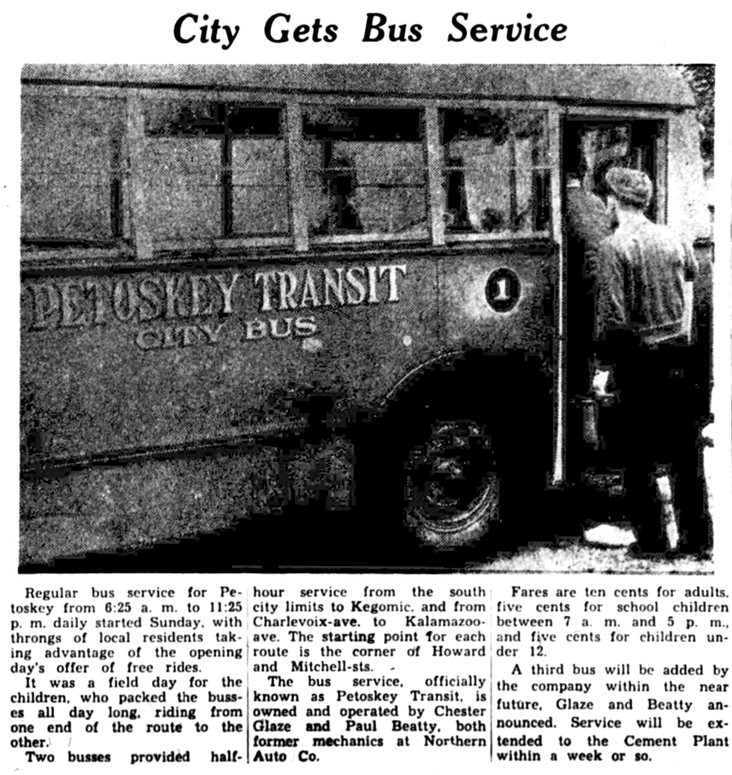 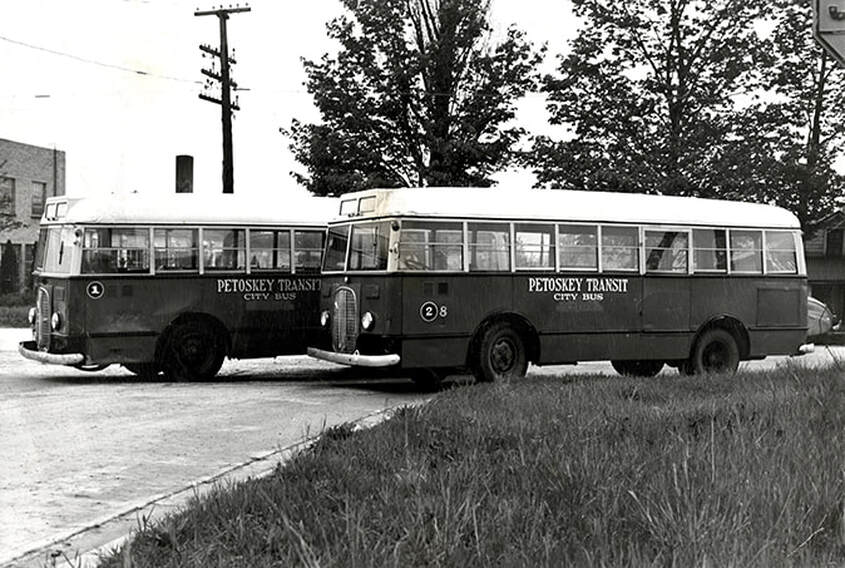 Little Traverse Historical Society Photo Collection
~ Smith Taxi Co. ~
426 Bay Street, Petoskey, Michigan
[Tip of the Mitt Watershed Council location in 2019]
Photo Below: Smith Taxi Co. was located on Park Avenue and Bay Street beside the city's park, across from Stafford's Perry Hotel in 2019. At the time of this undated photo the Kroger Grocery Store (Later the IGA) was located next to the parking lot beside the taxi company. In 2019 the Kroger store has been replaced with a multiple story bank, and office, building. 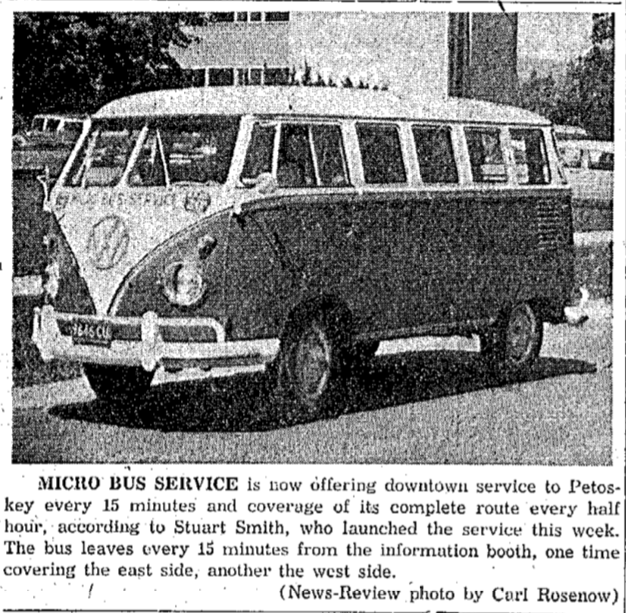 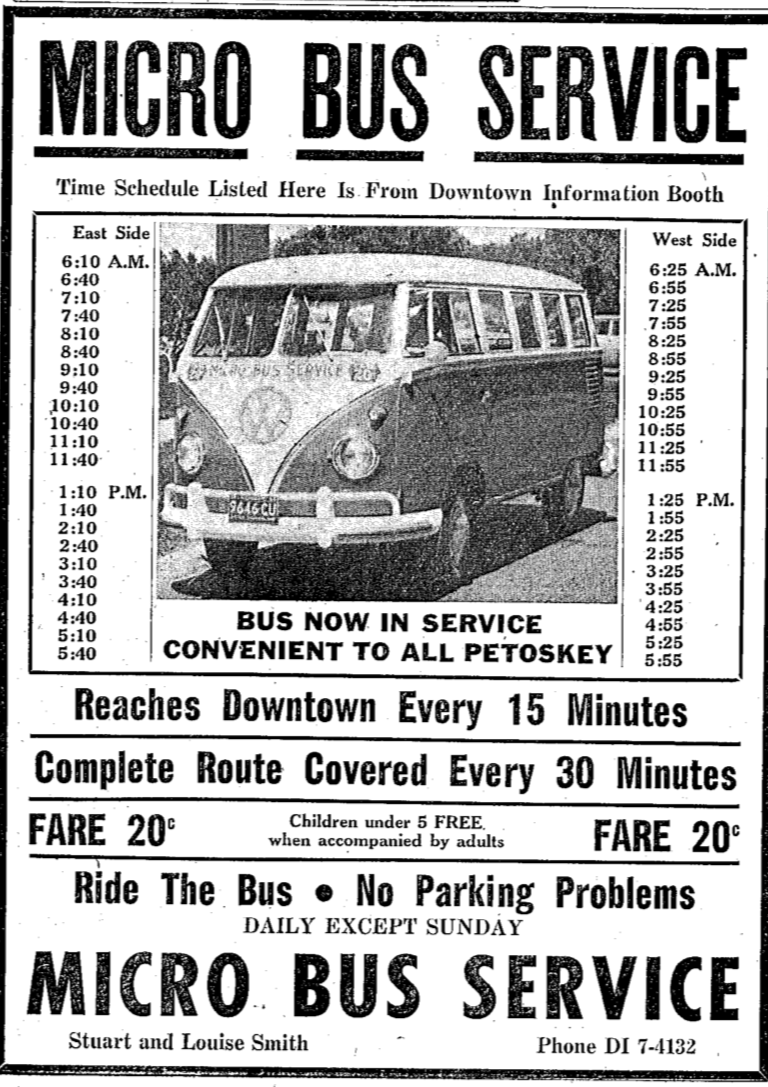 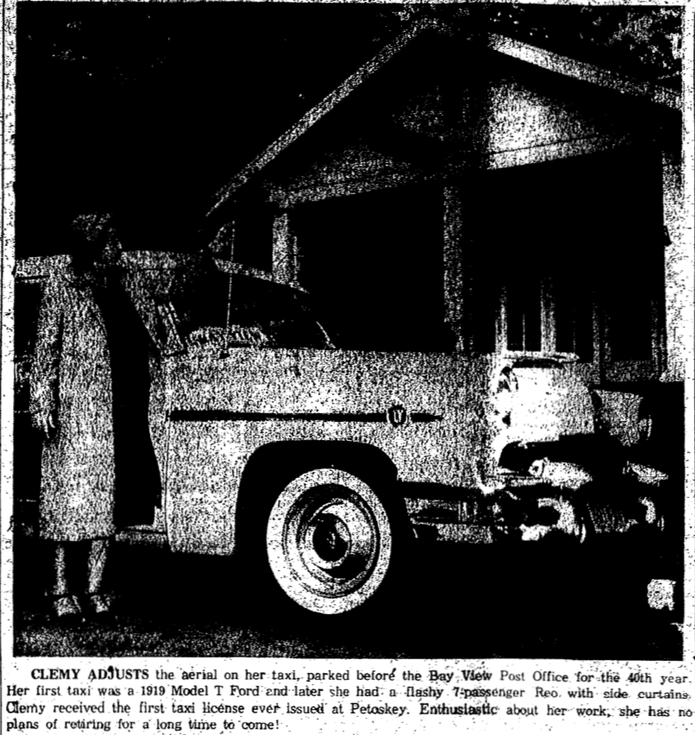 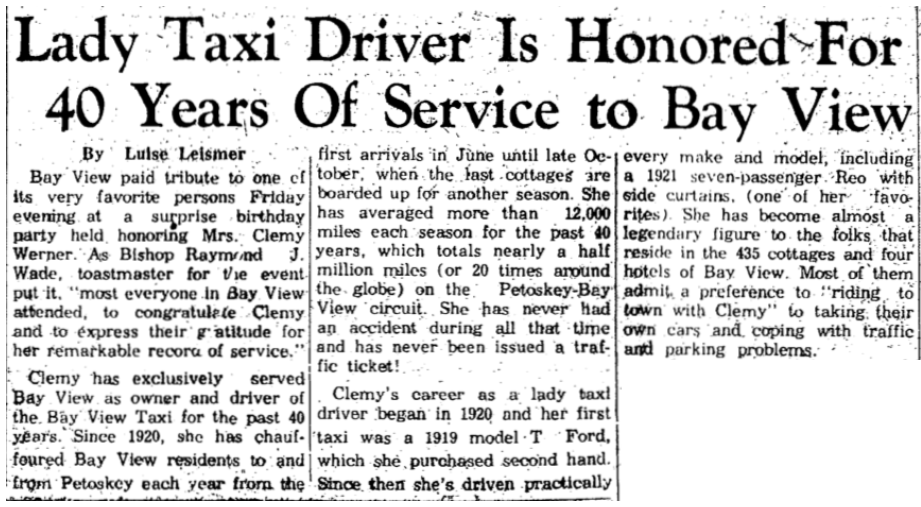 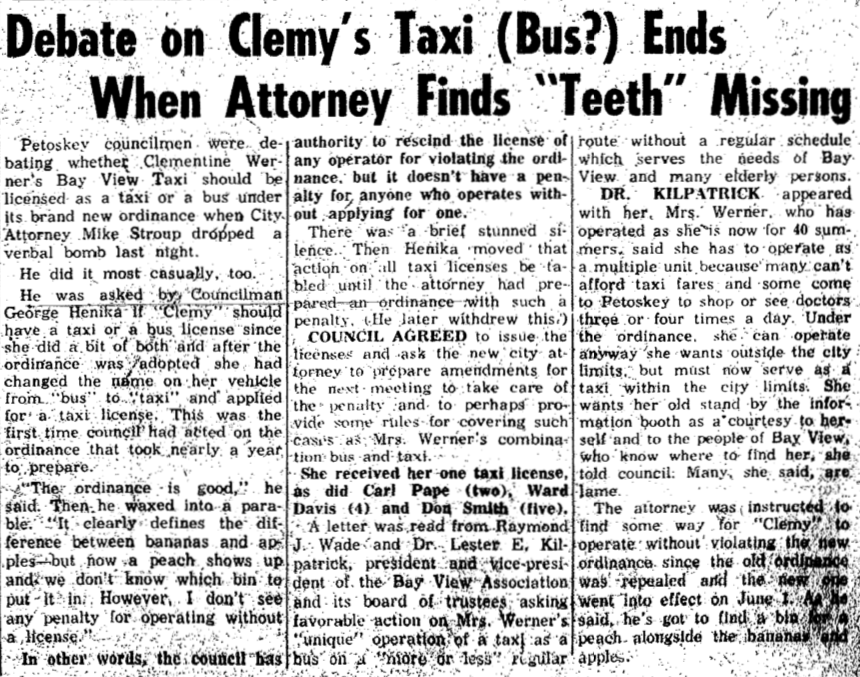 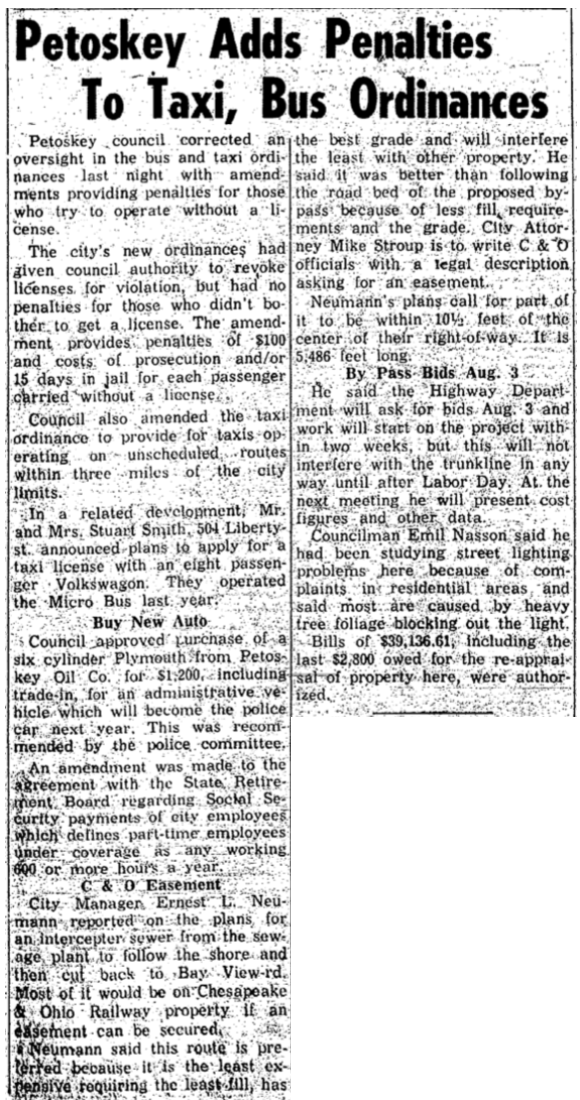 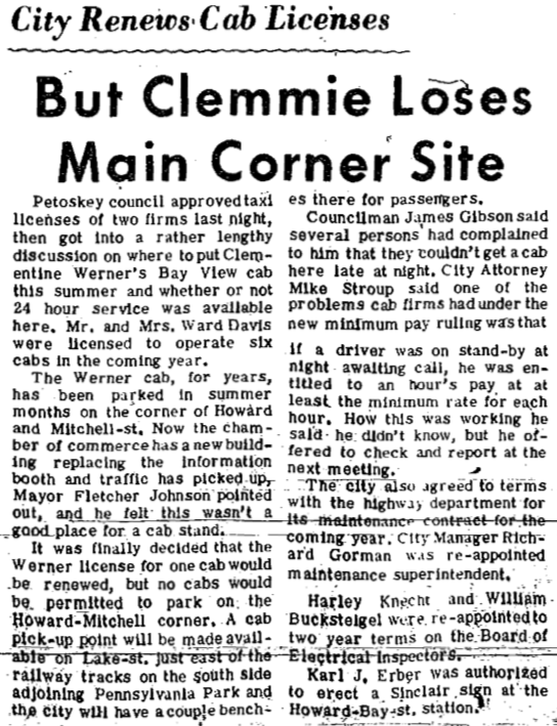 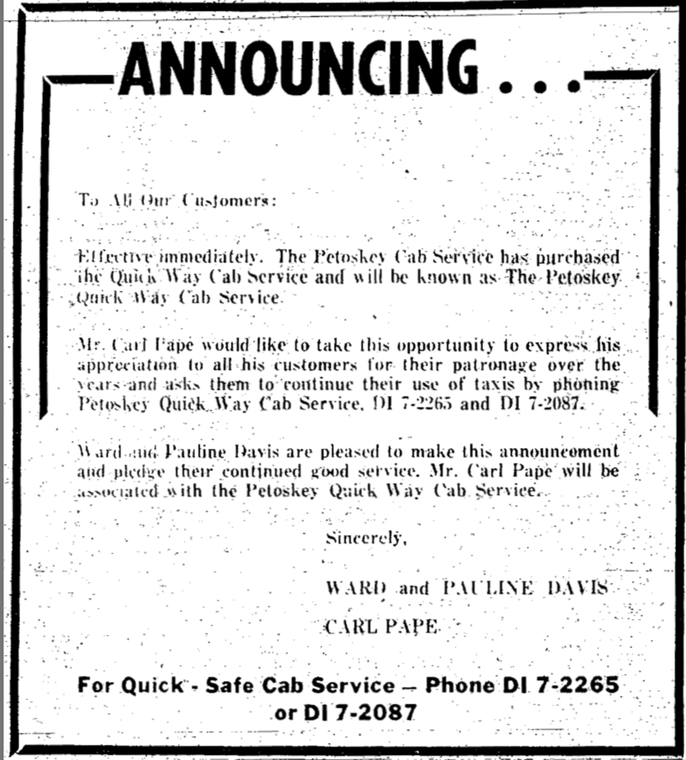