Nowhere in the whole region is there so grand a water power as is furnished by Bear river. Bear lake [Walloon lake], Bear River's source is twelve miles long, and one mile in width, and is situated 100 feet above the level of the bay, into which it empties. Bear River's chief falls are all in the near neighborhood of Petoskey, Michigan. The various mills and factories upon its banks do not begin to utilize its force. Surrounded by the choicest timber, including the much-sought black birch, bird's eye and curly maple, and with the advantage of cheap transportation by land and water, every inducement to the manufacturer to locate is here. ~ "Historical Sketch of the Village of Petoskey combined with a City Directory for 1882"
The design and compilation of the text and photos on this site are copyrighted 2017.
Most posted items will enlarge by "clicking" on them.
"Clicking" on some color highlighted words may access additional information.
Please do not copy the photos on this site, many of which have been submitted by private individuals...
just come back and visit the site often to view the photos.
Bridges and Dams listed in order from the river's upper flow heading toward the mouth of the river at the bay...
CLICK on any of the names below
to access information for that particular Bridge or Dam!
Petoskey's Bear River BRIDGES:
Standish Street Bridge
Sheridan Street Bridge
McManus and/or Bridge Street Bridge
Mitchell Street Bridge
Lake Street Bridge (plus... Foot Bridge and Railroad Bridge)

Wading in the Bear River was a Pastime of Tourists in the early days. 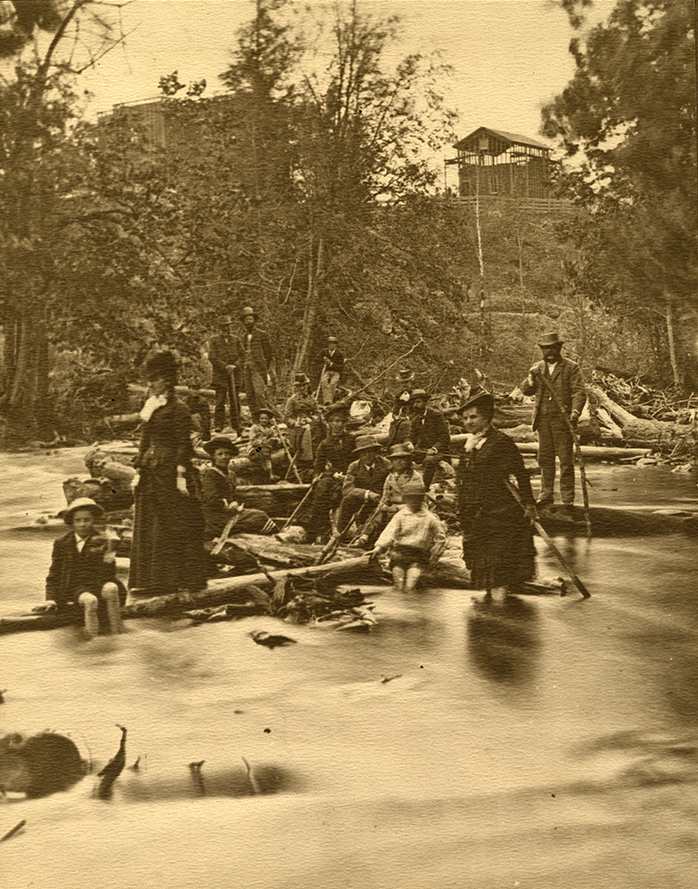 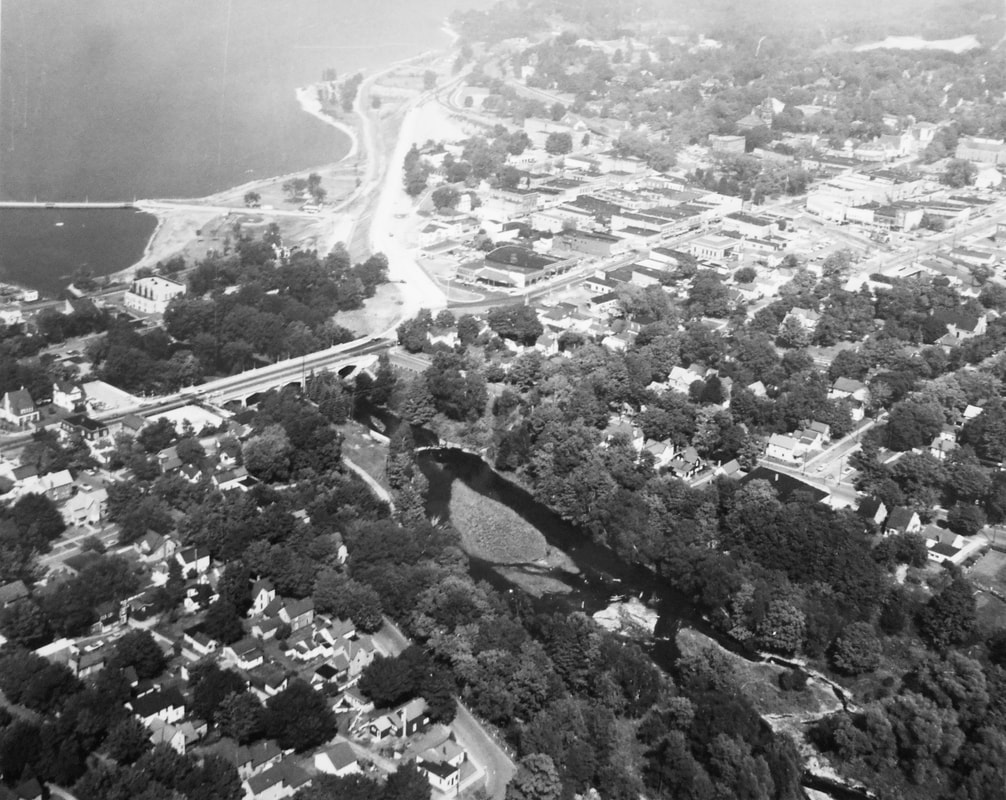 Little Traverse Historical Museum Photo Archive ~ Labeled 1 September 1961 Petoskey News Review "Your Daily Picture" Petoskey, Michigan
Today [2020] the only remaining one of Petoskey's Bear River five dams listed above is the Lake Street Dam (Bear River Low Head Dam/Weir) as noted above. With the four dams removed, the Bear River drops about 75 feet from Sheridan Street to reach Little Traverse Bay. Much of the river bottom is sand and gravel, with the banks lined with boulders. Much concrete in and near the river are remnants of the old dams, but some is placed riprap from the 1960s when the old Mitchell Street concrete post office was torn down when the debris was placed beside the river near the Lake Street Dam to narrow and straighten the course of the river at the Mineral Well Park area.
Harnessing the power of the Bear River saw early vying for industrial sites.
1867 ~ Hiram O. Rose bought the Andrew Porter Sawmill
while
Rose also was beginning to process the lime along the Petoskey Waterfront.
(Hiram Rose became the FIRST Village of Petoskey president.)
1875 ~ Hiram Rose leased his waterfront power rights to Loveless Blayney, who established a sawmill.
1875 ~ Mr. Gemmil and Mr. Kilborn built a sawmill on the old Porter gristmill site.
1875 ~ Water Power from Bear River was offered for free to interested manufacturers...
by Shaw & McMillan per article below
Article Below: Water supply controlled by dam owners can create a water famine
that affects the safety of the village from property fire.
1881 ~ Original Bear "Creek" Outlet into Little Traverse Bay 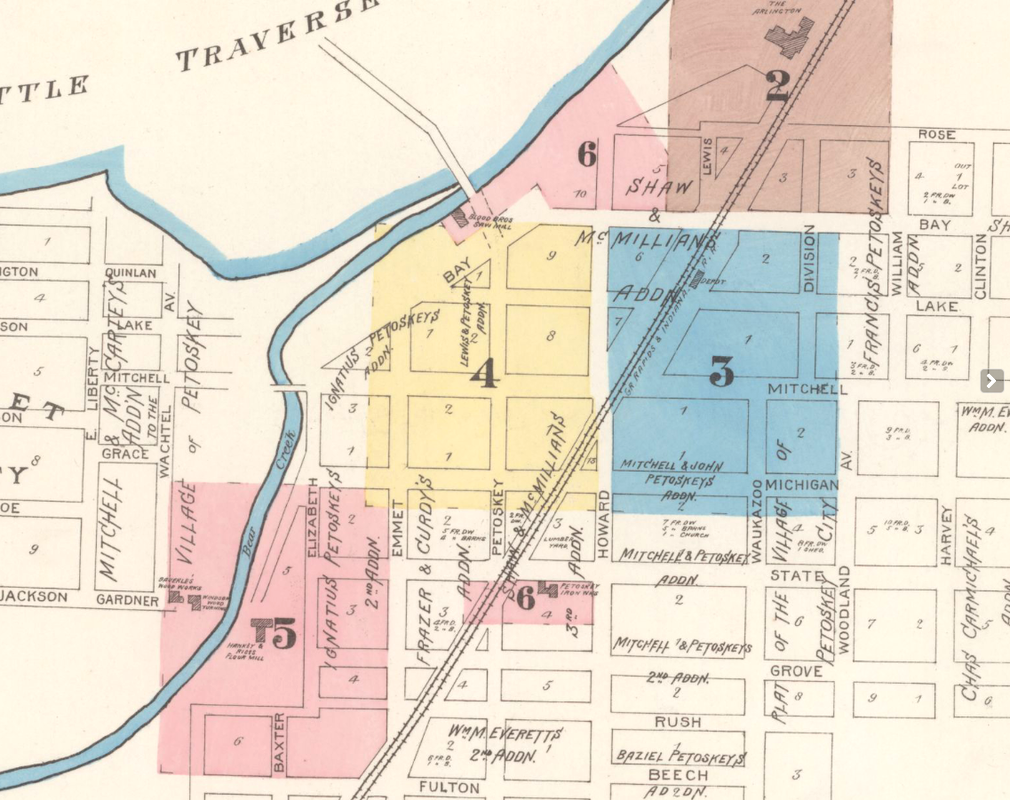 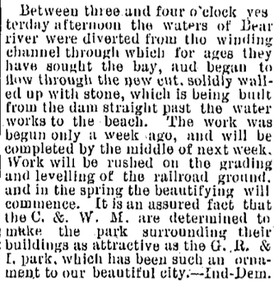 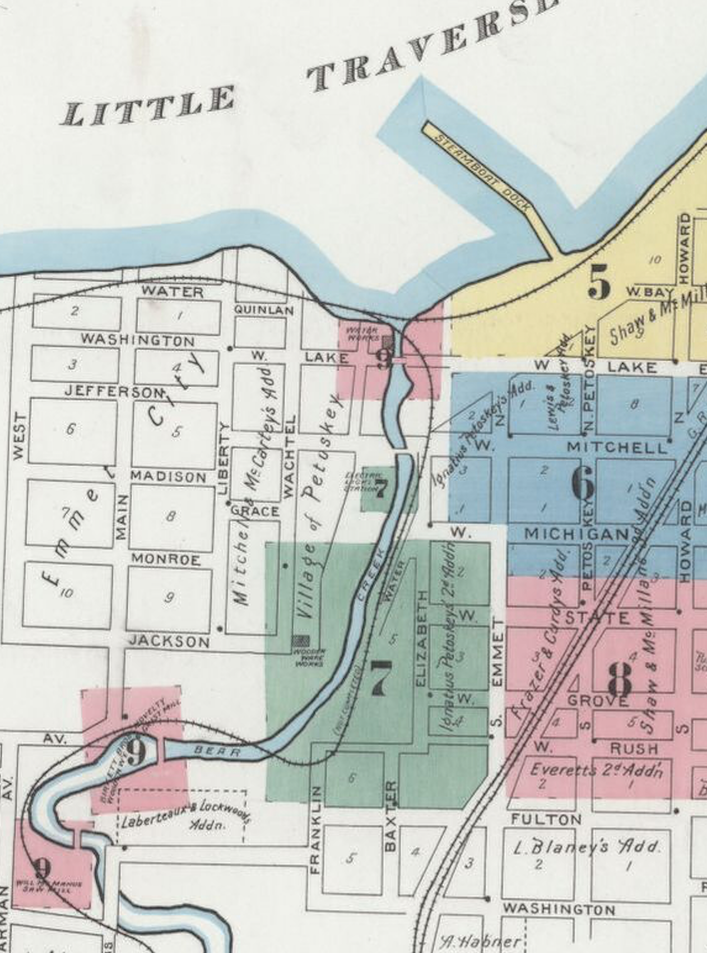 30 September 1880 ~ Petoskey City Record
* Ken Winters wrote in Historical Glimpses Petoskey on page 52: "In 1866, the family [Hazen Ingalls] again moved, to Bear River, where Mr. Ingalls purchased, reportedly from H.O. Rose, the Bear River water power and sawmill built about 1862 by a nephew of Andrew Porter. Ingalls engaged in farming and later changed the mill to a gristmill." Allan McCune told in the article below that H.O. Rose began buying property on both sides of the Bear River as early as 1862. Rose became very influential in the development of Petoskey with its water related industries. 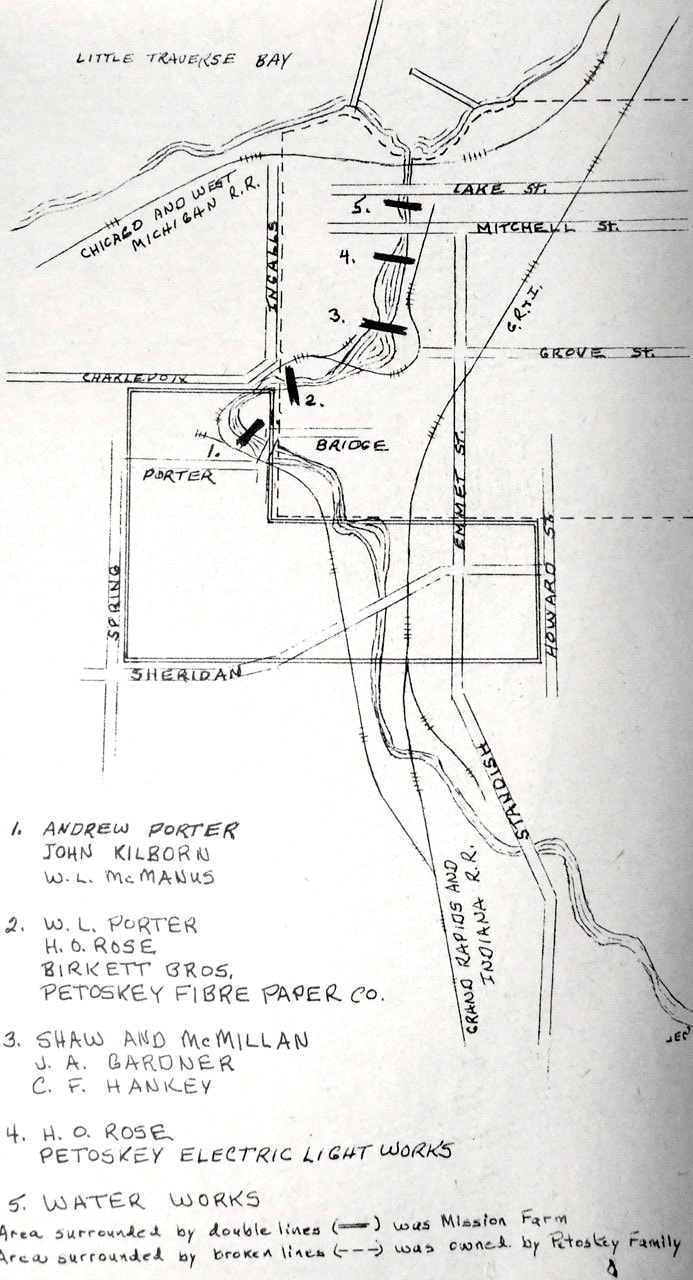 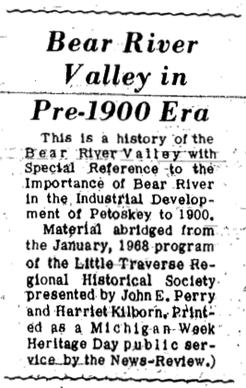 As compiled below...
For Michigan Week in 1968, the Little Traverse Regional Historical Society reviewed the Early Days; the 24 May 1968 Petoskey News Review published the map (above) and writings of John E. Perry and Harriet Kilborn, noted Local Historians, concerning the role the Bear River with its "Bridges and Dams" played in Petoskey History.

John Perry and Harriet Kilborn's article is compiled on the following three pages... to read the article in proper order, read each full page as presented here, before continuing to the next page. 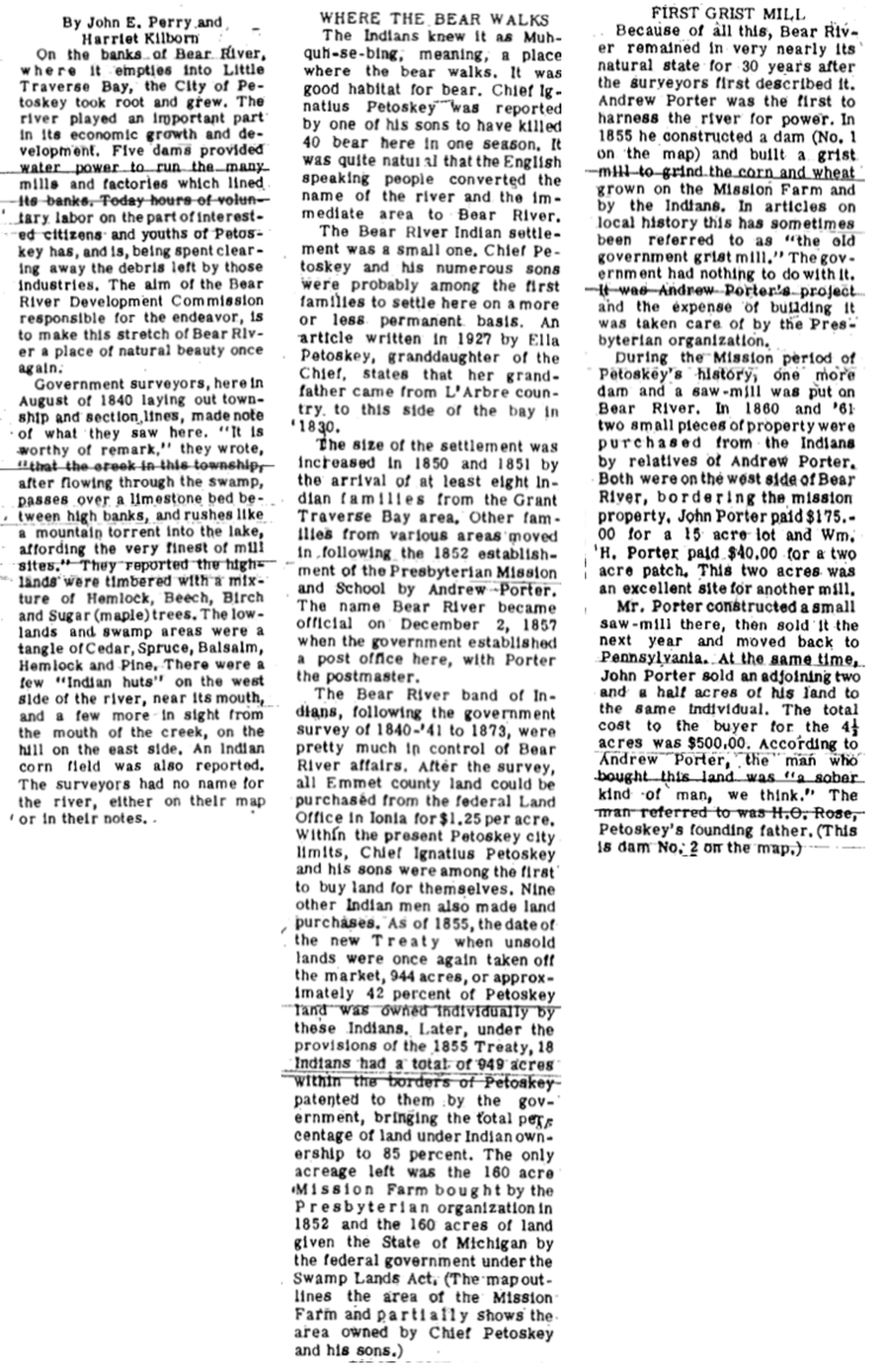 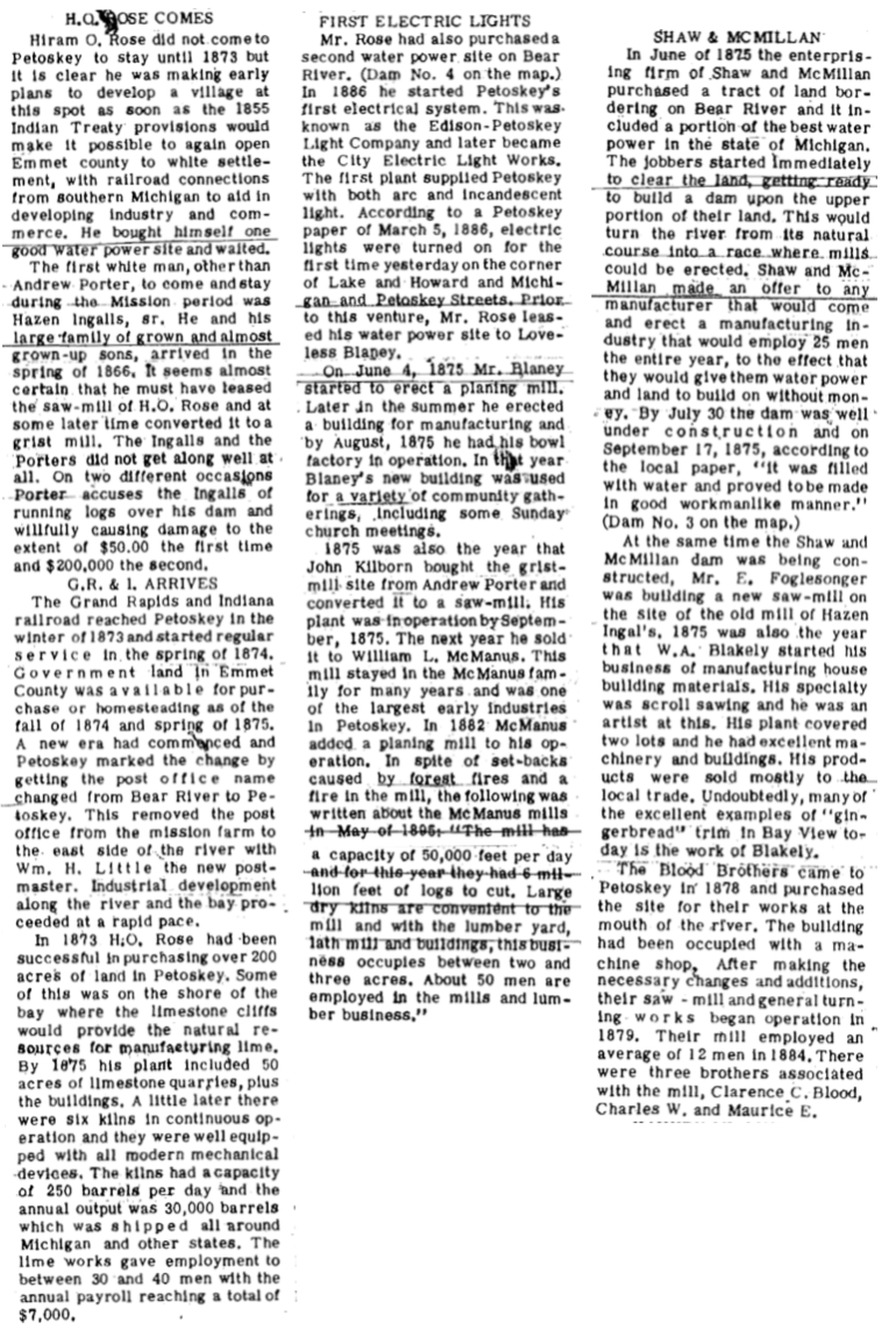 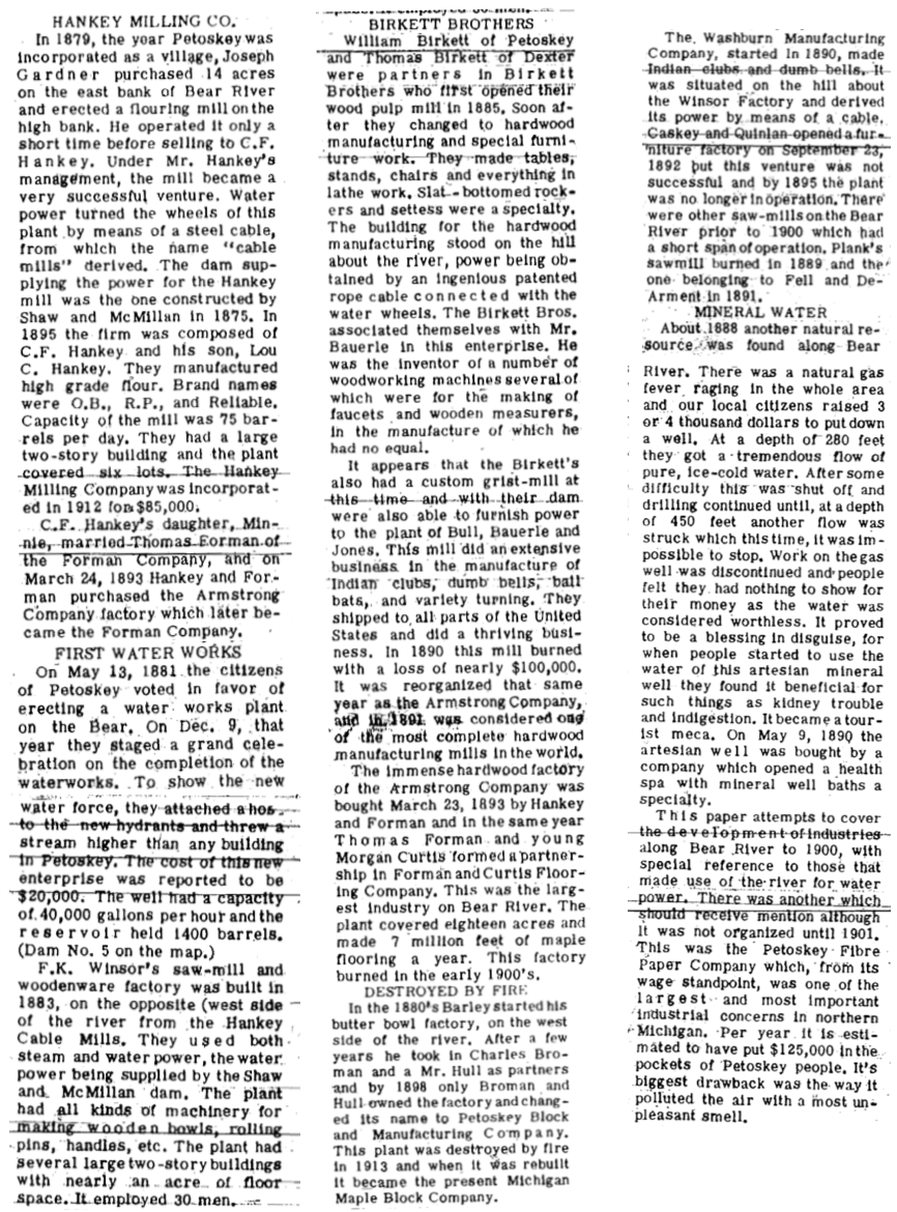 THREE
Early industrialists on the banks of the Bear River... 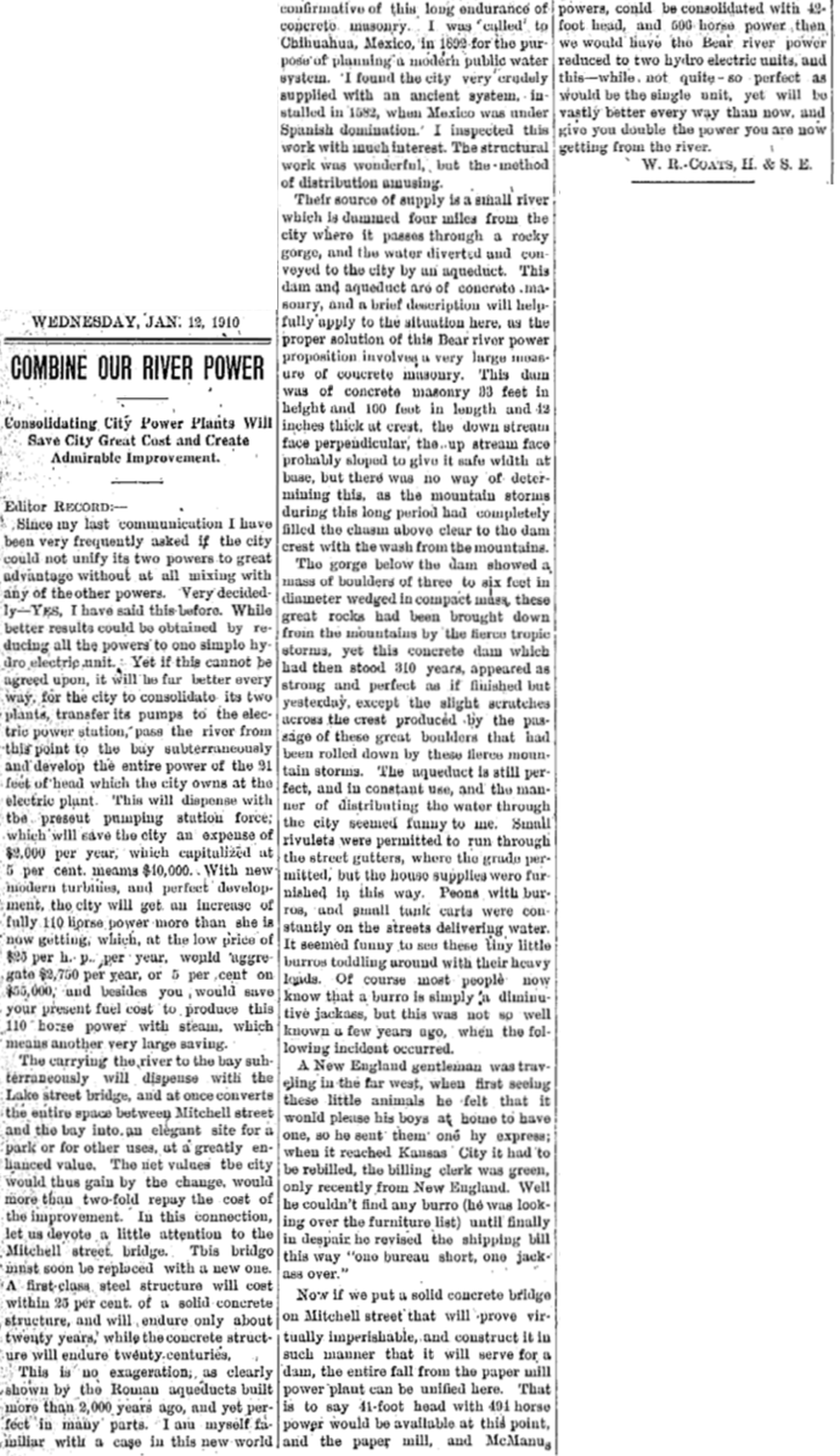 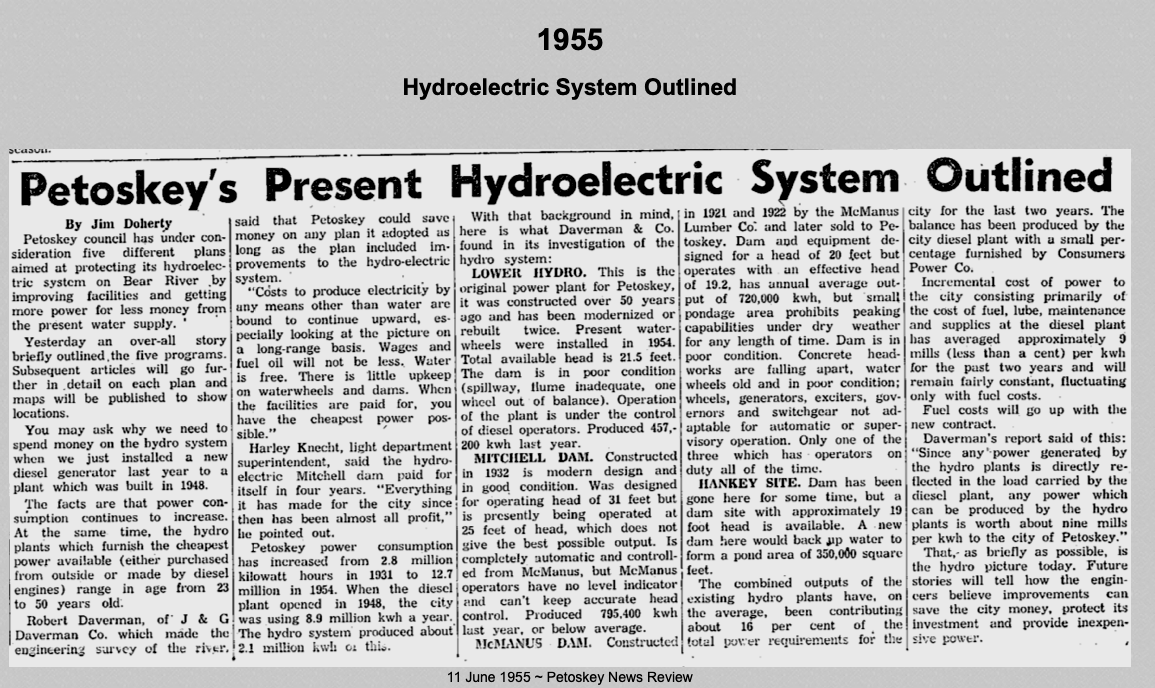 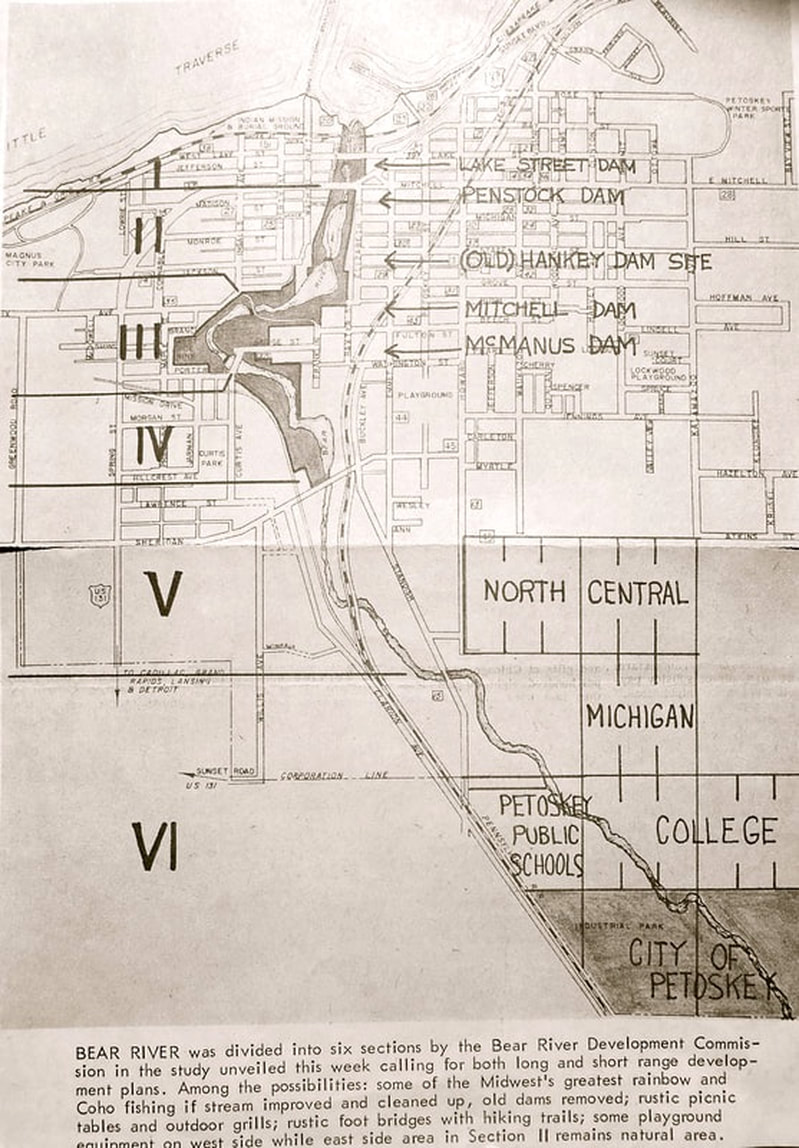 Undated newspaper, probably Petoskey News Review
1965 AND 1968
What is the connection with the term Penstock Dam on the above map
AND the word "penstock" in the text under the second photo below?
The definition of "penstock" is:
1. a sluice or floodgate for regulating the flow of a body of water
2. a channel for conveying water to a waterwheel or turbine 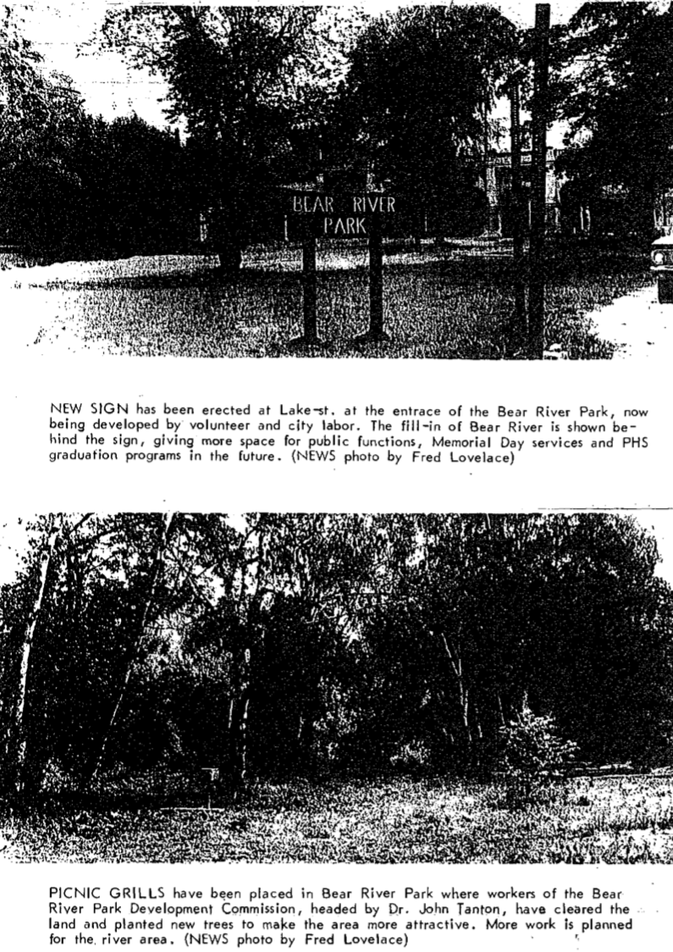 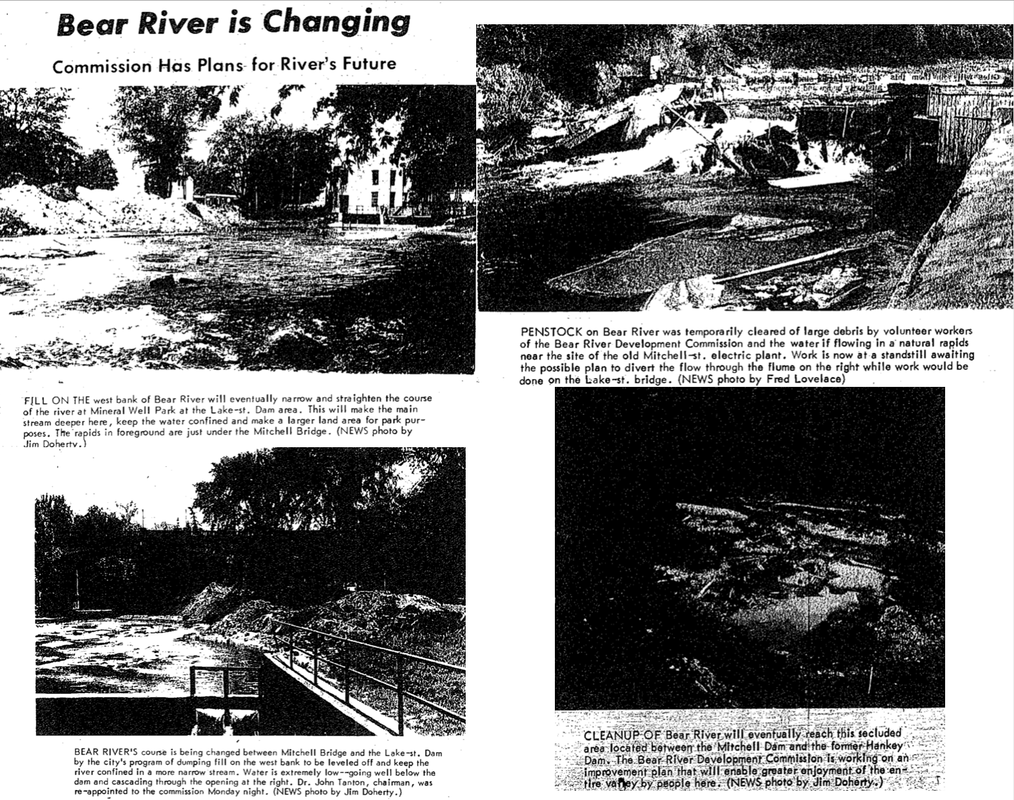 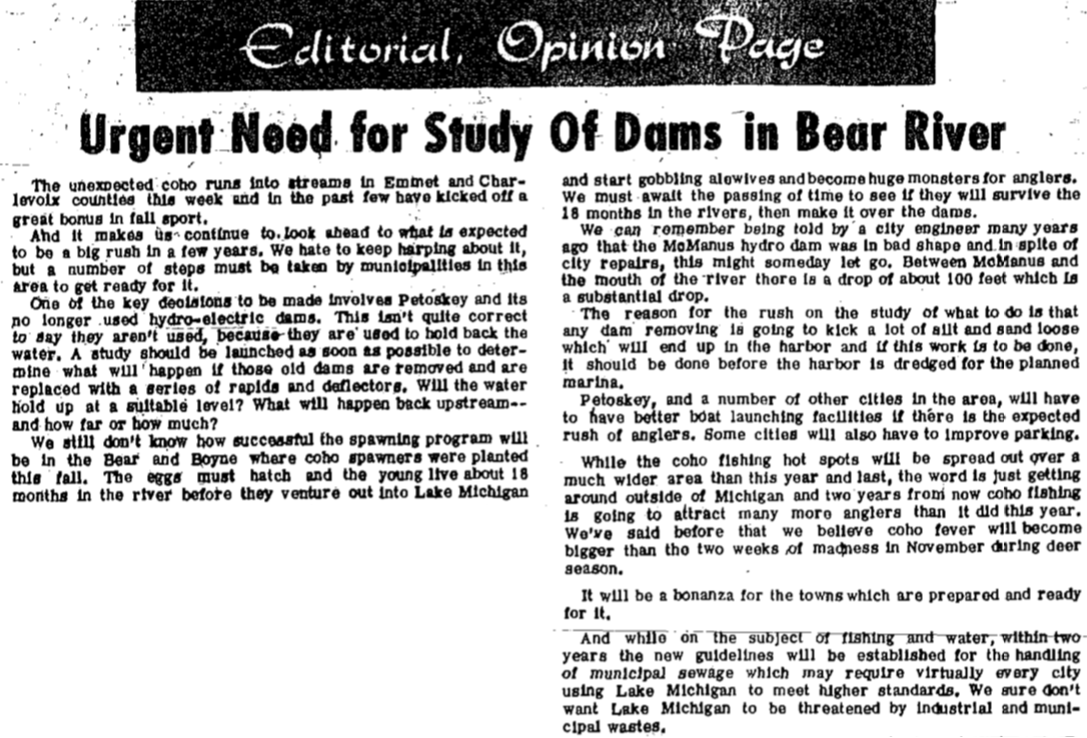 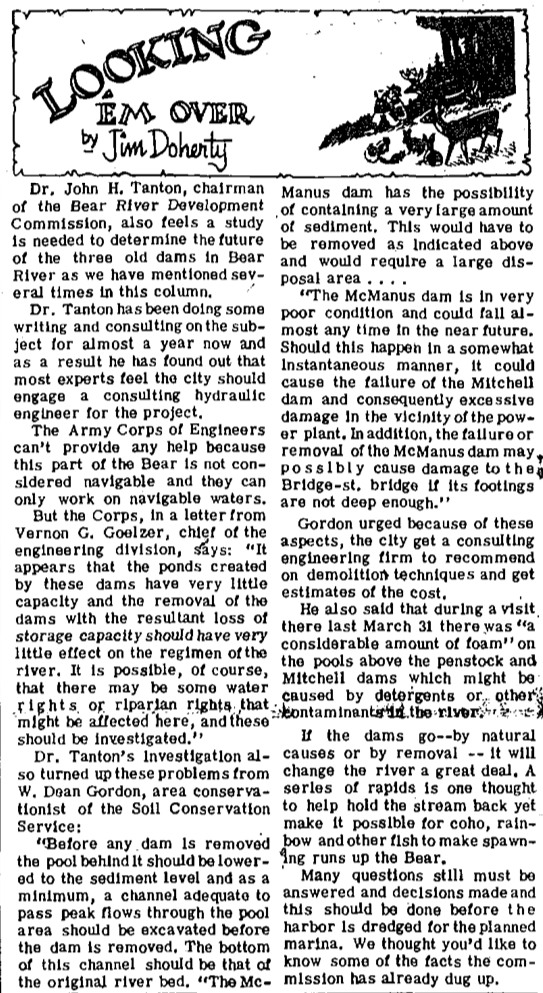 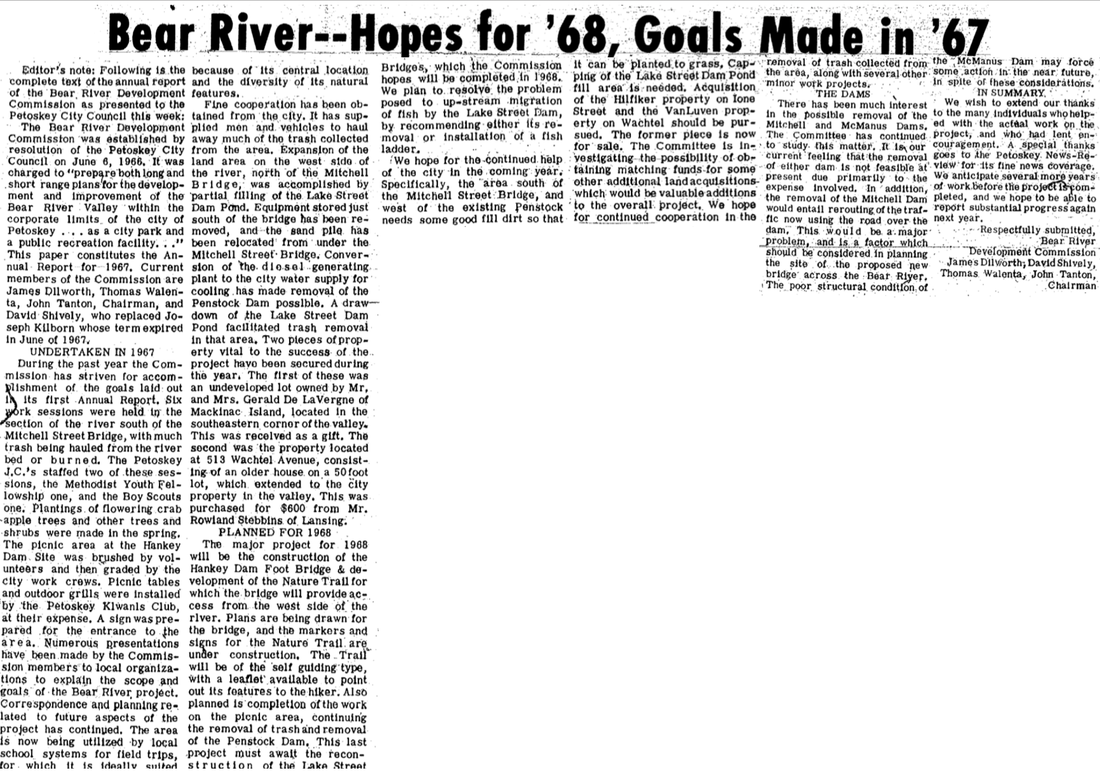 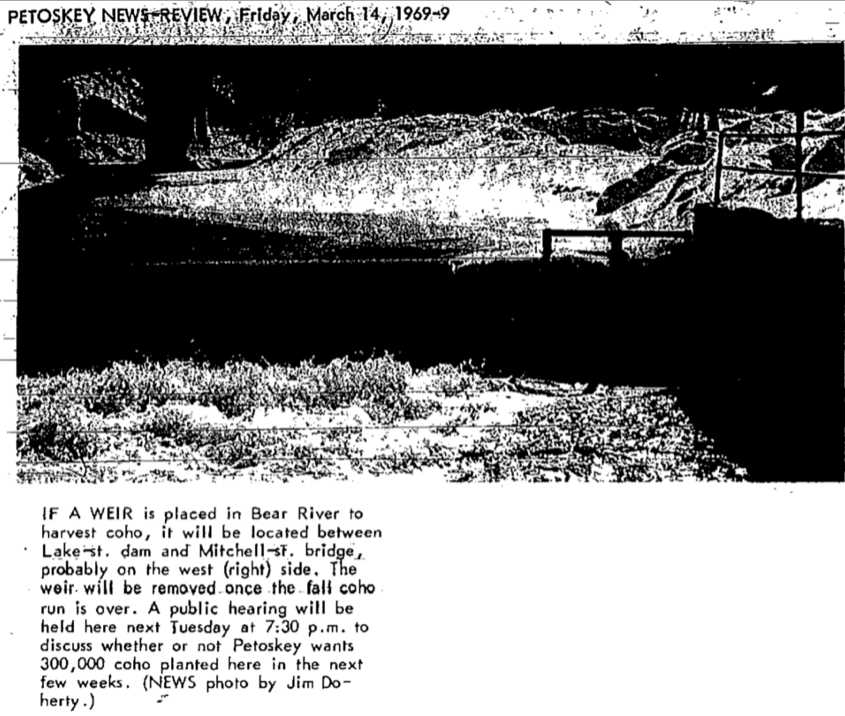 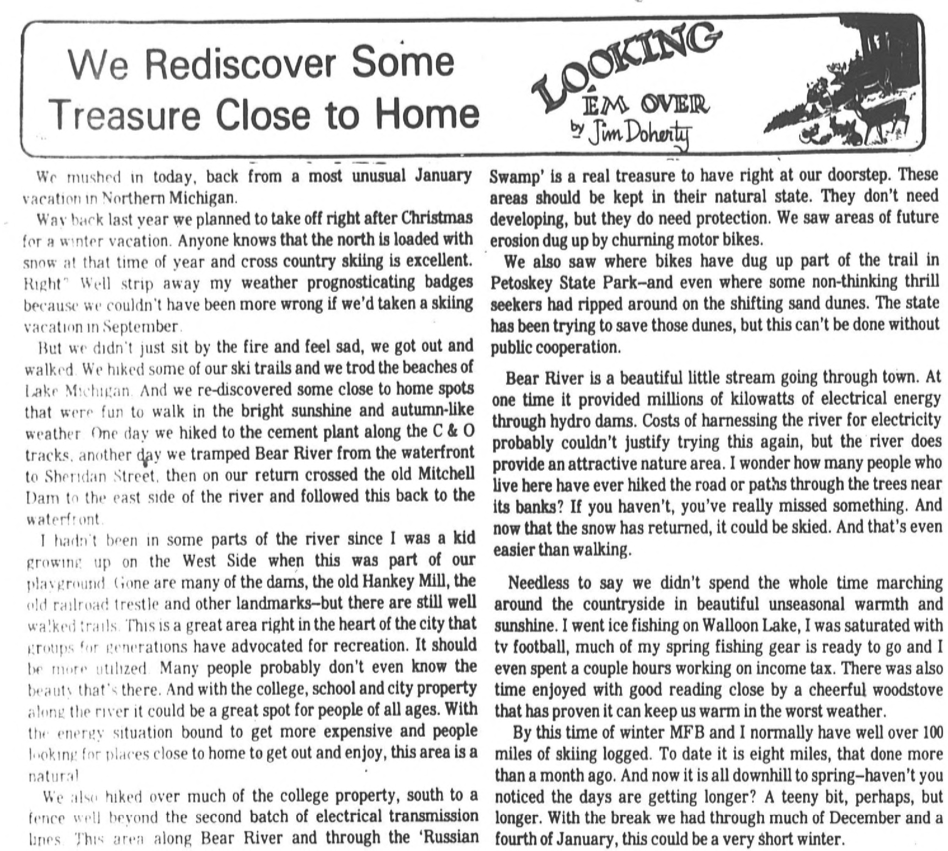 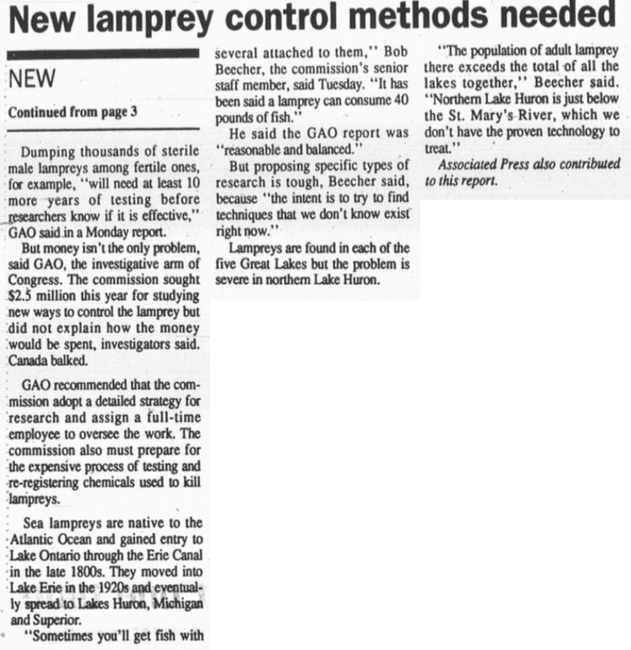 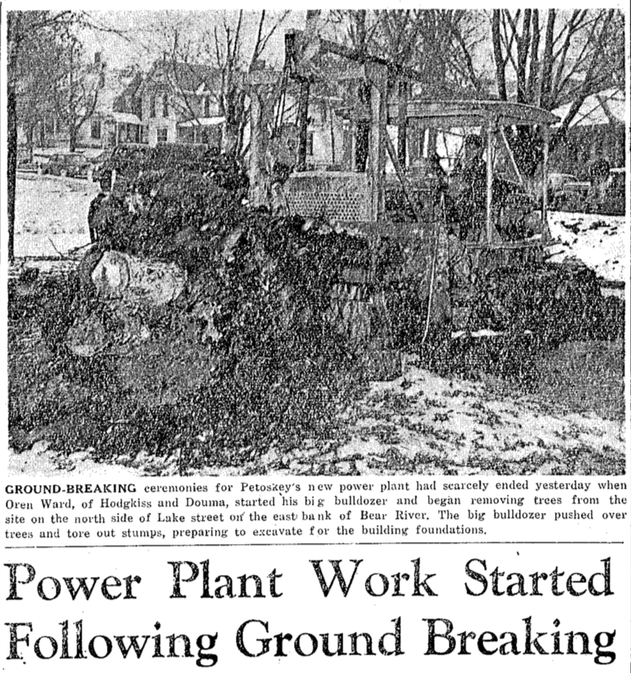 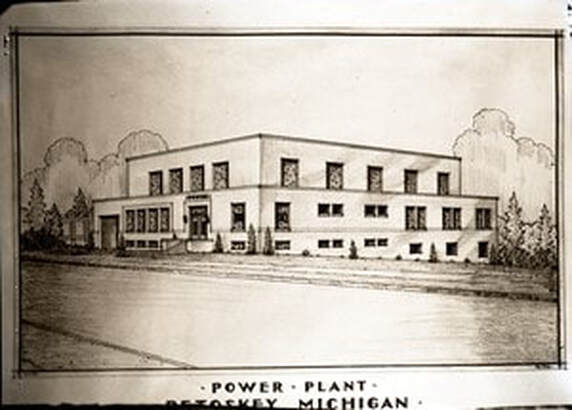 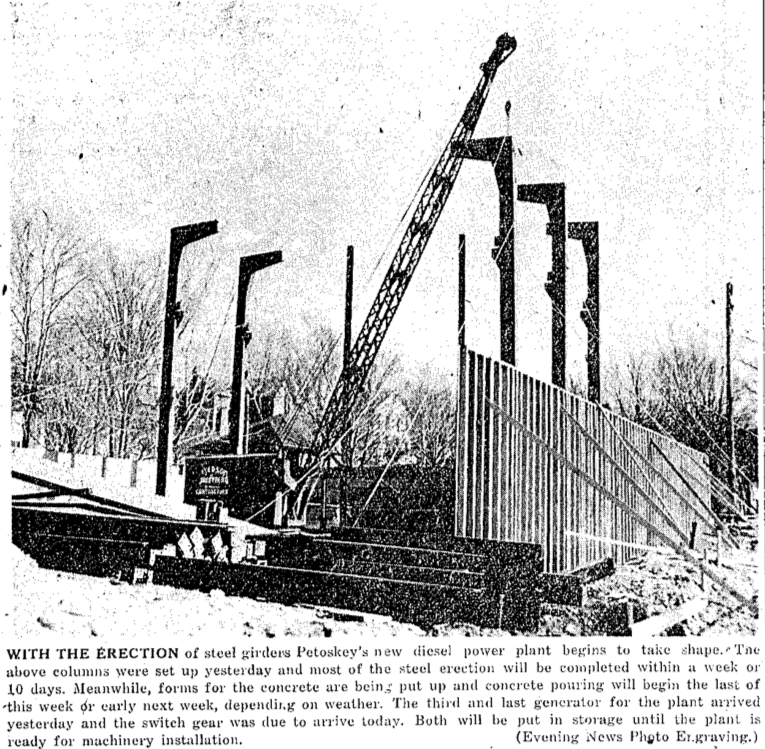 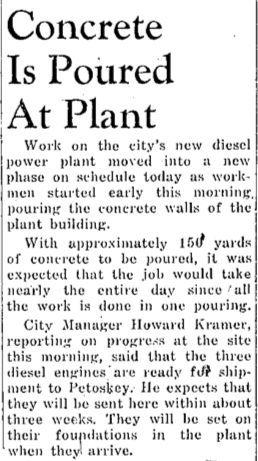 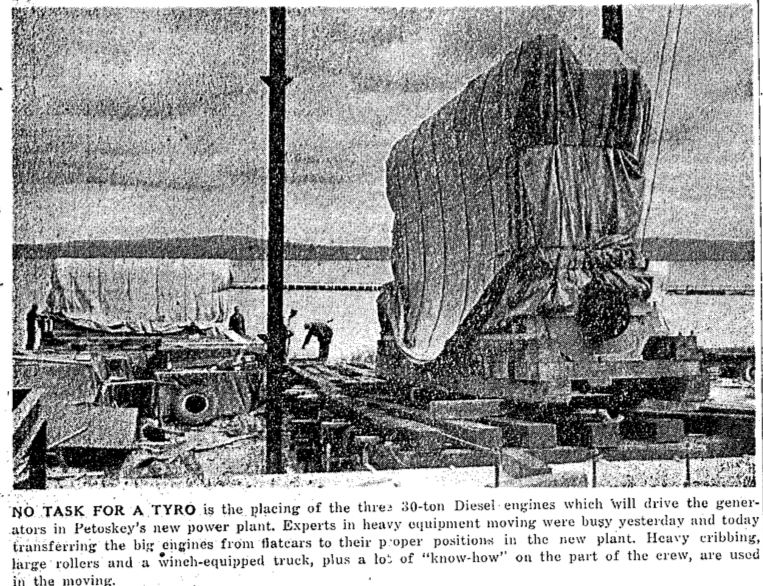 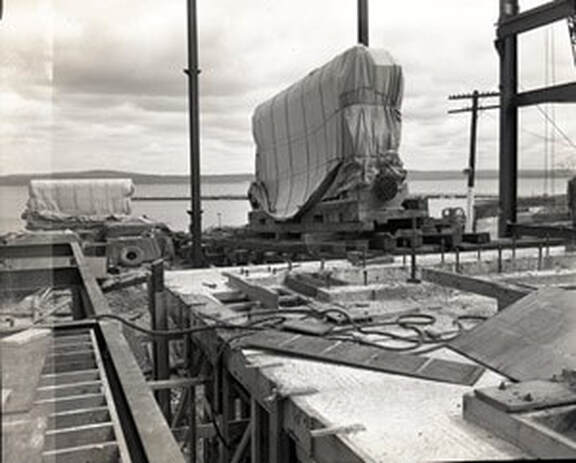 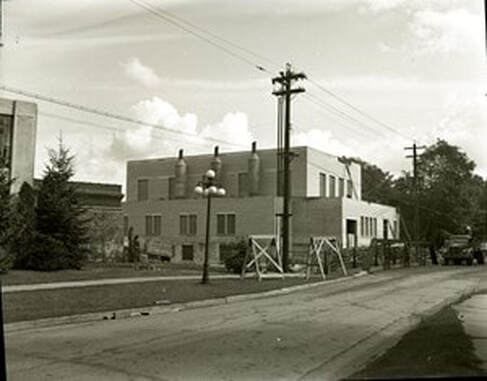 Greenwood Photo Archive Collection from Petoskey Newspapers (1948)
1967 Article Below:
Study Already Made on Oil Pollution in Bear River and the Harbor from the City's Diesel Plant 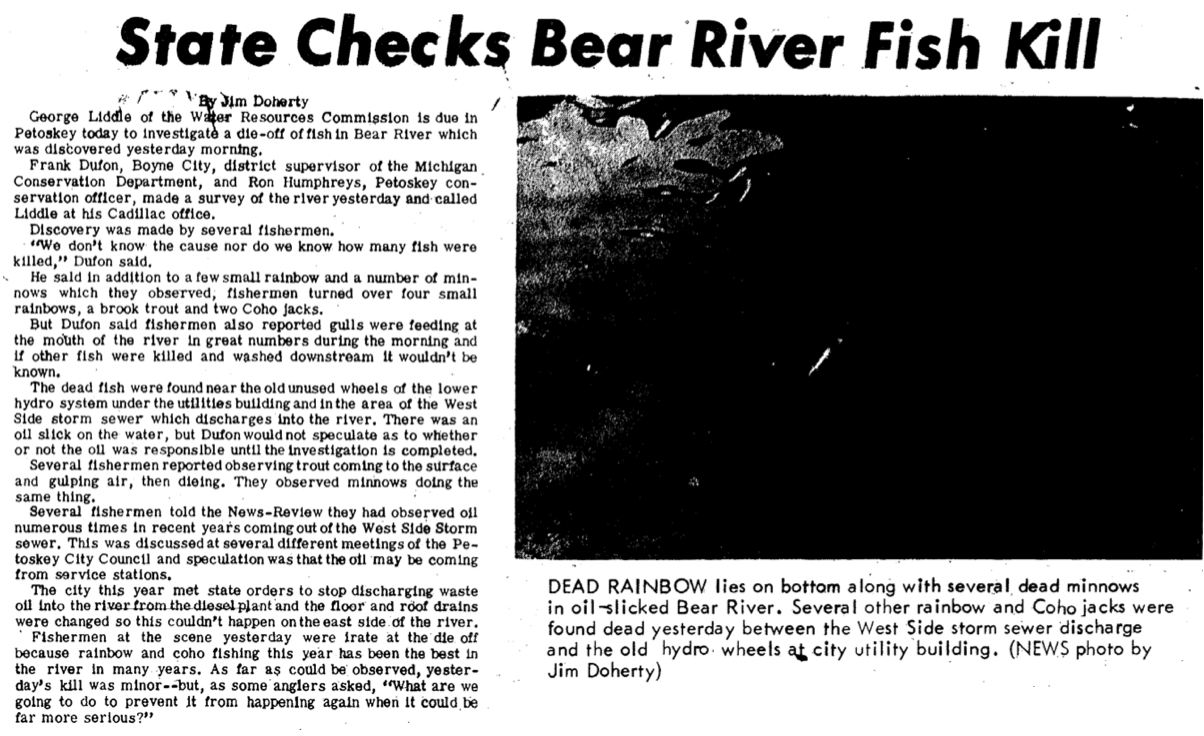 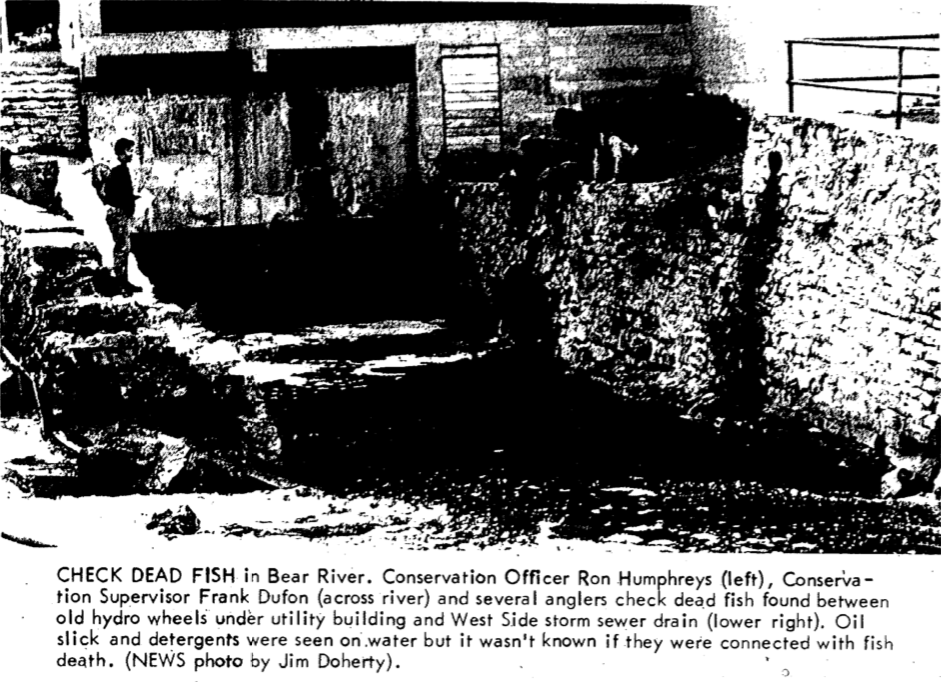