The design and compilation of the text and photos on this site are copyrighted 2017.
Most posted items will enlarge by "clicking" on them.
"Clicking" on some color highlighted words may access additional information.
Please do not copy the photos on this site, many of which have been submitted by private individuals...
just come back and visit the site often to view the photos.
Waugoshance Shoal Lighthouse limestone block crib structure constructed in 1851 was the
FIRST major crib built specifically for a lighthouse on the Great Lakes.
By 1912, Waugoshance Shoal Lighthouse was abandoned and
replaced by White Shoal and Gray's Reef Lights (Photo Below is Gray's Reef).
Gray's Reef Lighthouse is in northeastern Lake Michigan,
3.8 miles west of Waugoshance Island in Bliss Township, Michigan.

Waugoshance Light Station was listed 4 August 1883 on the
National Register of Historic Places. 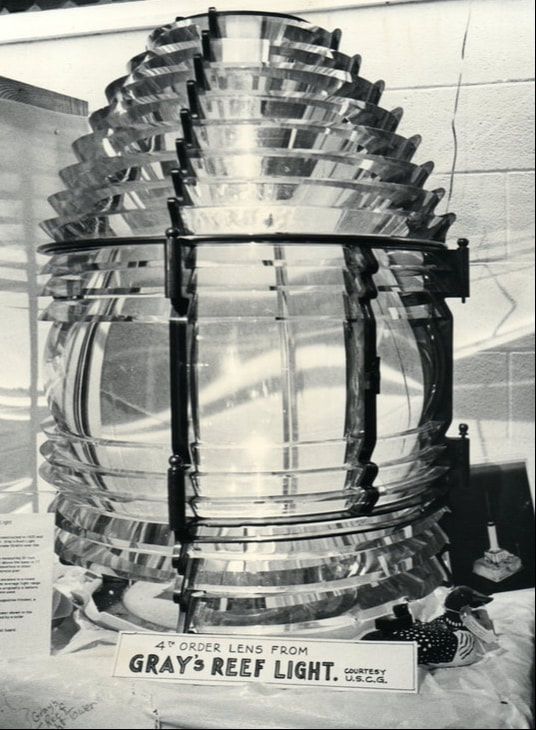 Grays Reef ~ Greenwood Photo Archive collection from Petoskey Newspapers (Undated)
Quoted from Where Michigan Began A Guide to Emmet County, Published 1941: Cross Village offers a wide view of Lake Michigan. Directly west is the Beaver Island group. In the foreground is the rocky island named Isle Aux Galet by the early French and mispronounced 'Skill–i–ga–lee; by the indians and many modern sailors who are guided by the light house there. Northwest from Cross Village is Grey's Reef, where a lightship swings at anchor during the season of open navigation. Directly east of the lightship and north from Cross Village is Wau–go–shance Islands. A Lighthouse, erected here during the Civil War, was abandoned in 1912. Strangely, the name of this lighthouse too, was much abused in its pronunciation by the sailors of the Lakes, who called it Wau–gee–shank or simply The Shank. It is believed by some that the spelling of this old French name as it appears now on maps is a corruption of the original. Records, however, vary. Regardless of names and their corruption, the view from the bluff at Cross Village is one that should not be missed by the visitor..."

9 April 1948 ~ Petoskey Evening News article accompanied airview photo above...
Raymond Kalbfleisch reported about Waugoshance Shoal Lighthouse and its relationship to Cross Village in the September 3-9, 1986 Harbor Light newspaper: "A lightship was first anchored near Waugoshance in 1832. Later, lighthouses pinpointed the obstructions to lake navigation northwest of Cross Village. [Article below indicates that Waugoshance Lighthouse was commissioned in 1851.] And over the years many of the lighthouse keepers were from the village area. Also, the keepers usually came to Cross Village for supplies. Thus, they too, were recognized as having an active part in the economic and social life of the village."
Emmet County's Waugoshance Lighthouse protects boats
from a shoal area at the northern end of Lake Michigan. 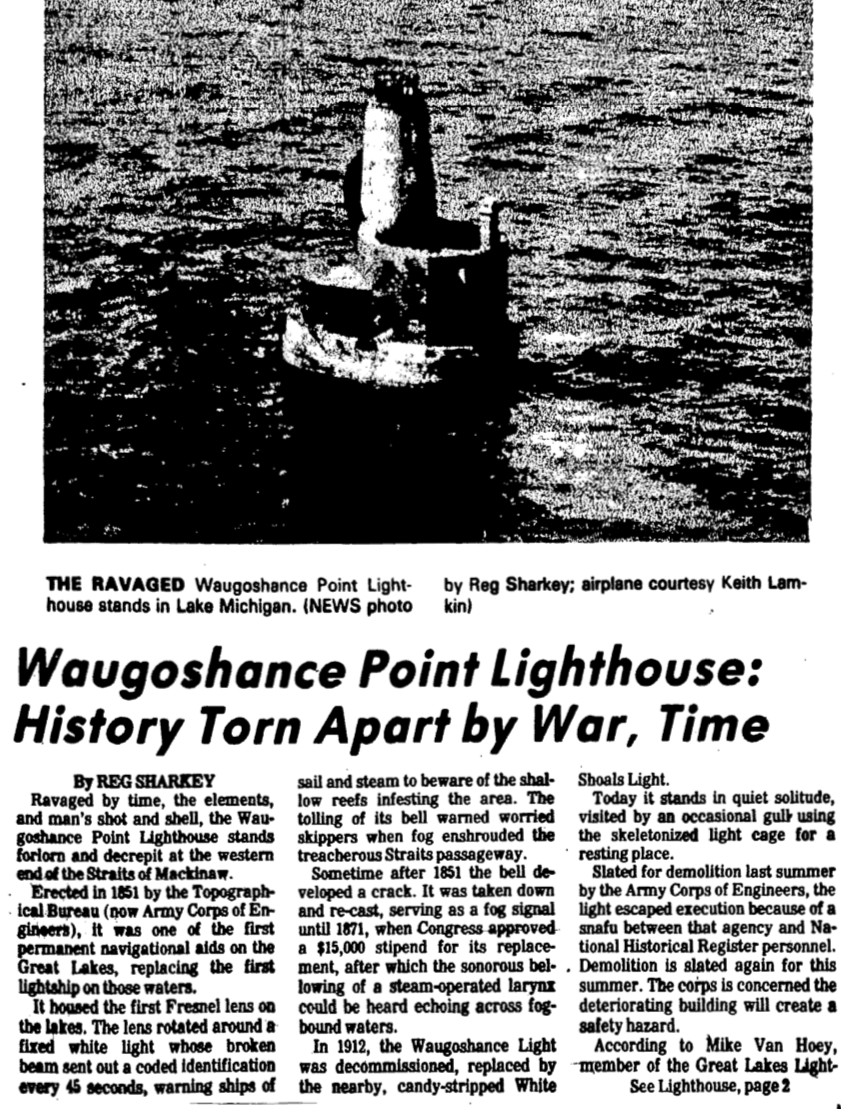 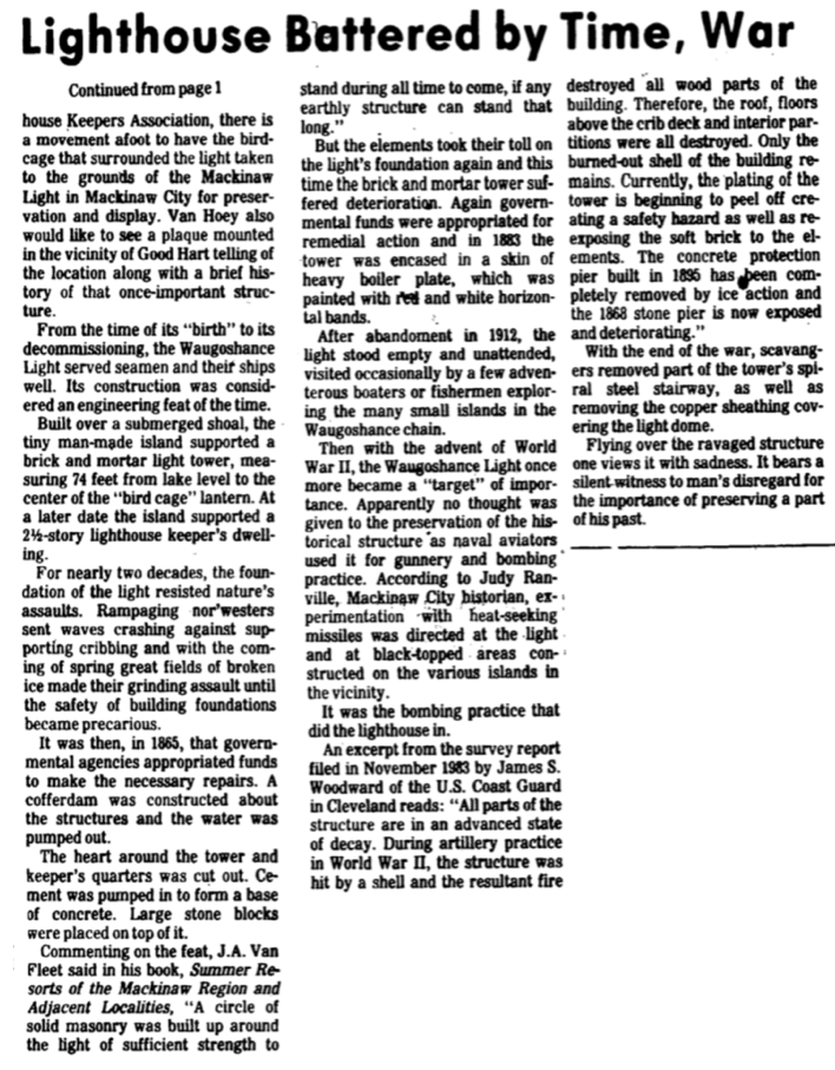 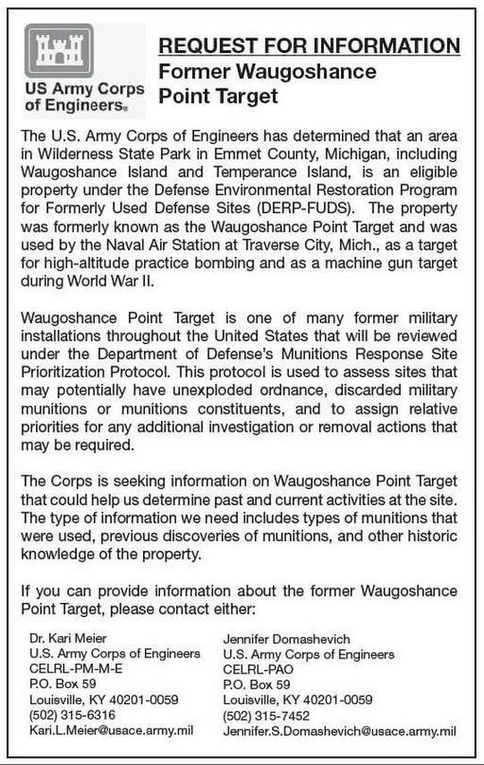