The design and compilation of the text and photos on this site are copyrighted 2017.
Most posted items will enlarge by "clicking" on them.
"Clicking" on some color highlighted words may access additional information.
Please do not copy the photos on this site, many of which have been submitted by private individuals...
just come back and visit the site often to view the photos.
(Shaw and McMillan > J.A. Gardner > C.F.Hankey) 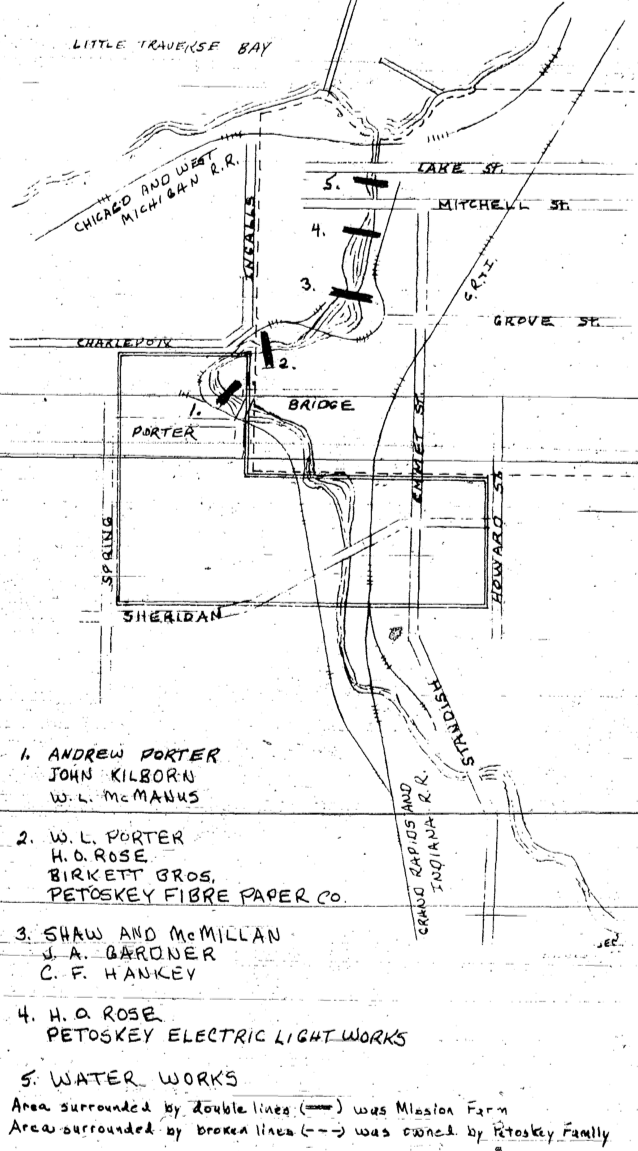 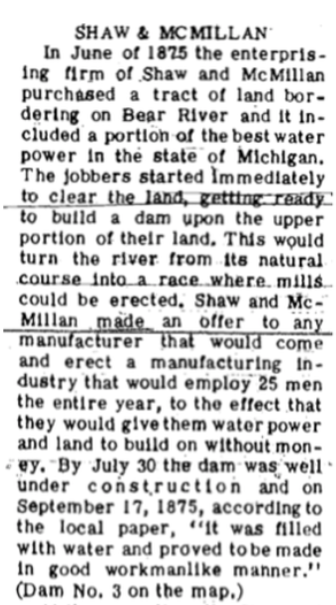 Little Traverse Region page 157 FIRST wrote the information above which is the same as written in the above article...
1875 ~ Water Power from Bear River was offered for free to interested manufacturers...
by Shaw & McMillan per article below
1875 ~ Building a Dam is NOT a Governmental Undertaking...

11 June 1875 ~ Emmet County Democrat
Article Below: "The probabilities are that in the spring there will be a Flouring mill erected upon the site owned by Shaw & McMillan, upon the site of the dam, and another manufacturing establishment on the other site." 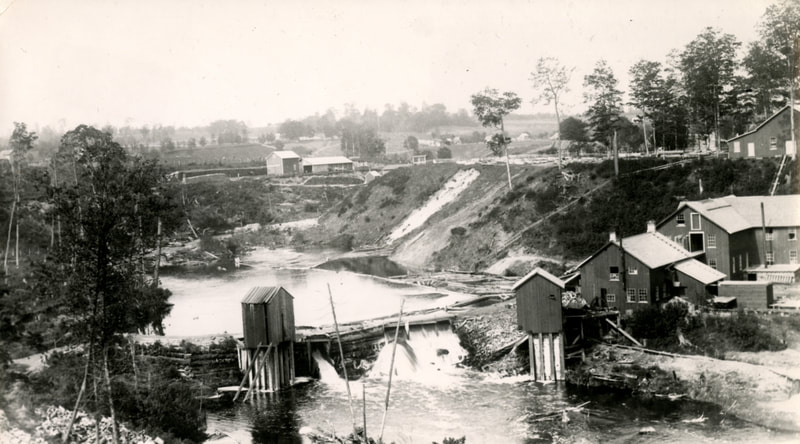 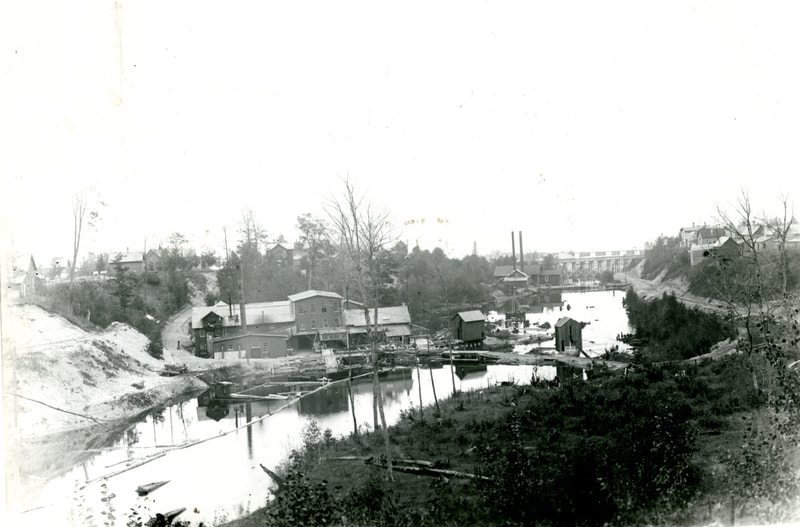 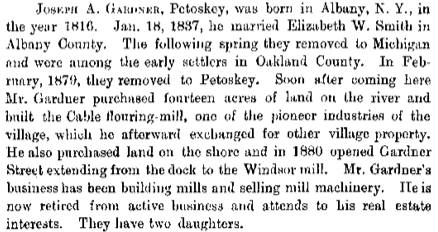 12 October 1898 ~ The Petoskey Record
Clipping Below: Mr. Hankey has severed ties with the Cable Mills.
A later article below stated: "Mr. J.J. Hankey having leased his interest in the mill for a term of years,
the firm is now Hankey & Rigg, being composed of Mr. C.F. Hankey, and Mr. Richard Rigg,
both experienced millers and excellent business men." 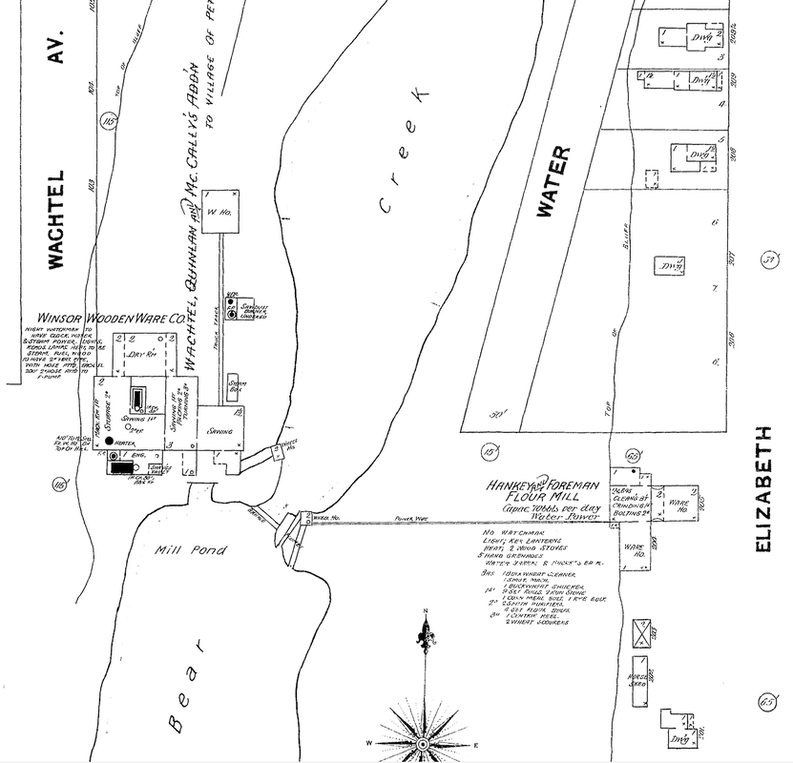 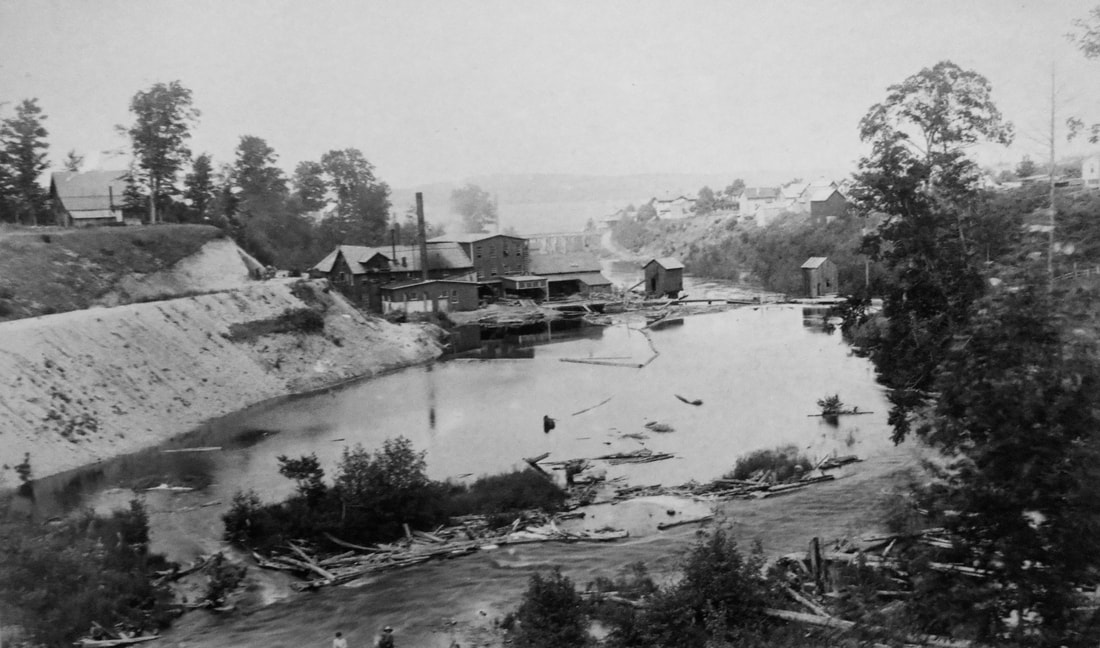 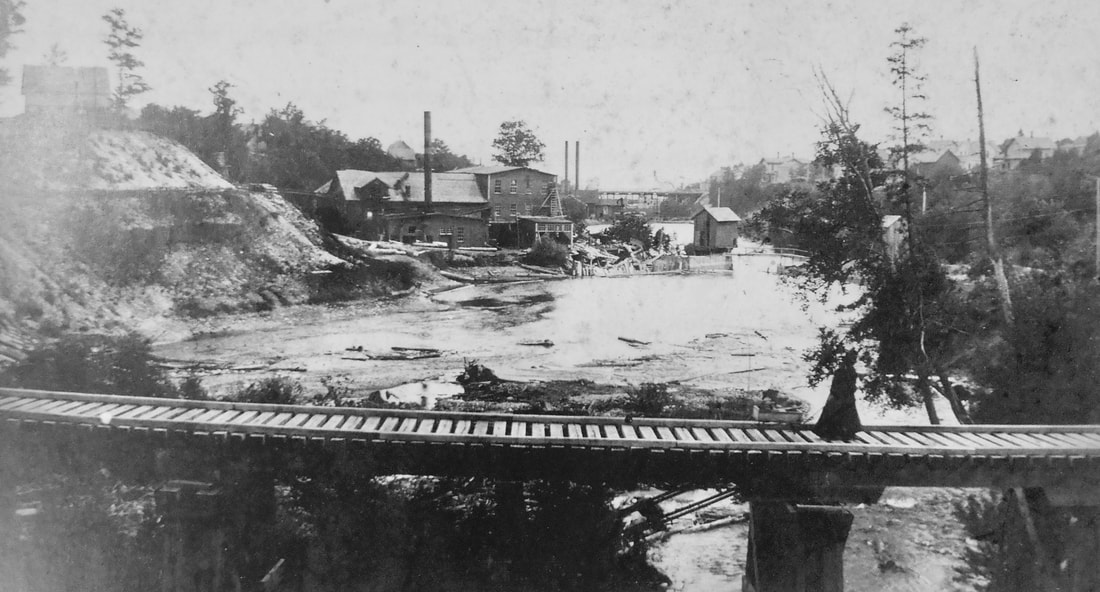 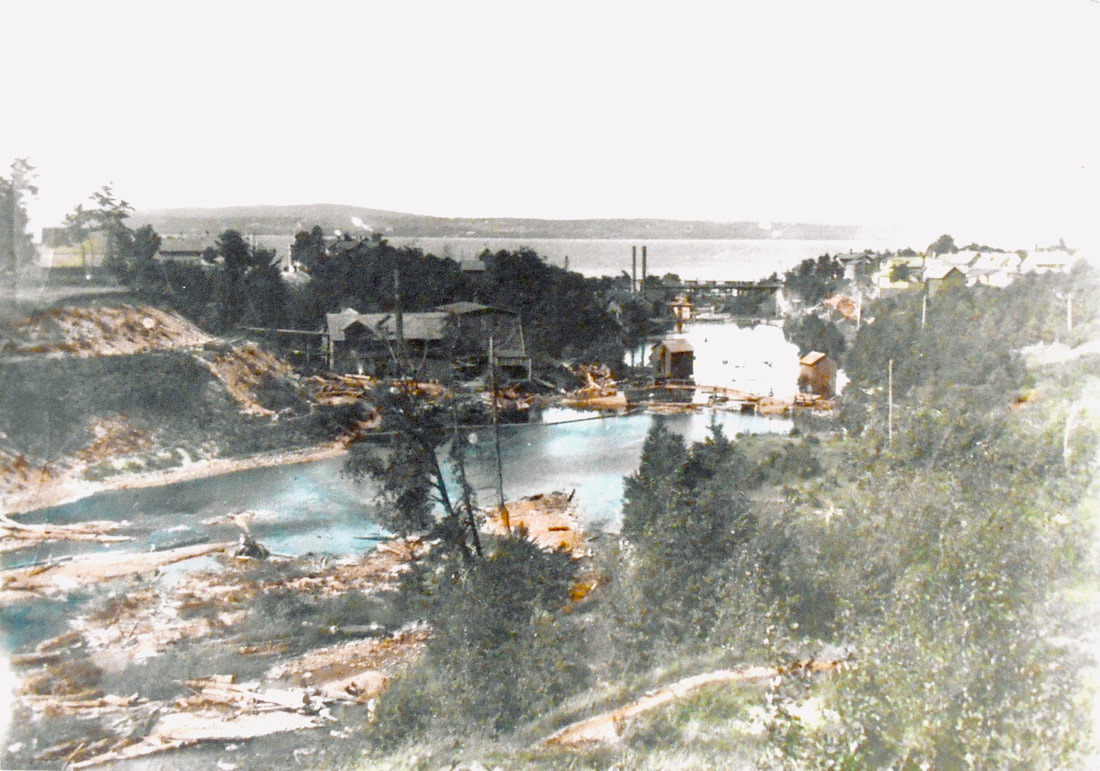 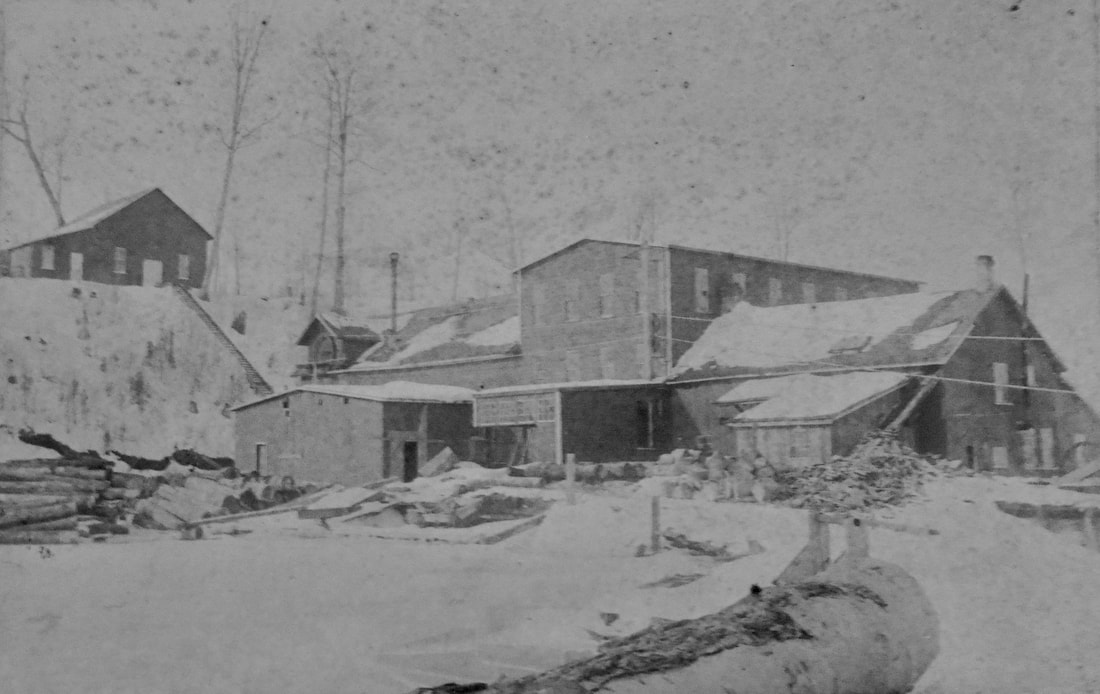 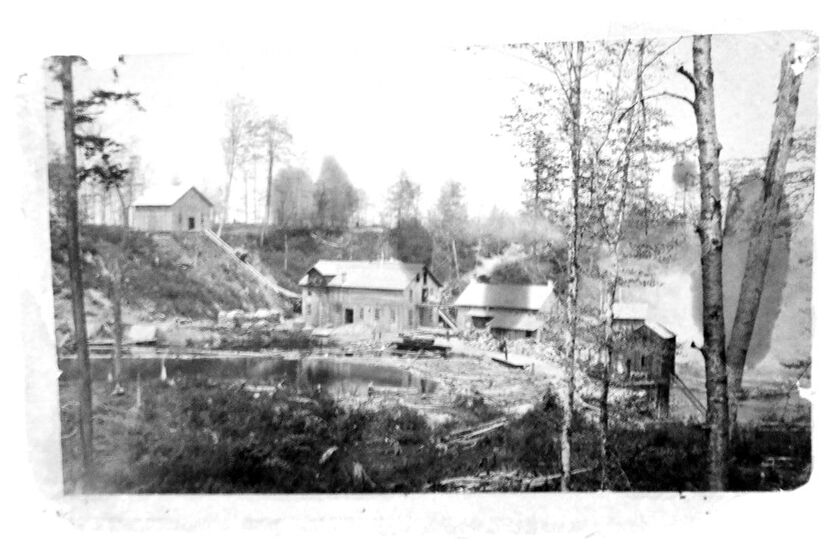 Little Traverse Historical Museum (Mrs. F. H. Winsor wrote on back "Winsor Woodenware factory before he enlarged it.")
F.K. Winsor's saw mill and woodenware factory (in the photo below on the right) was built
on the west side of the river from the Hankey Cable Mills near the dam.
Paper Mill is in the background with the smoking stacks.
1883 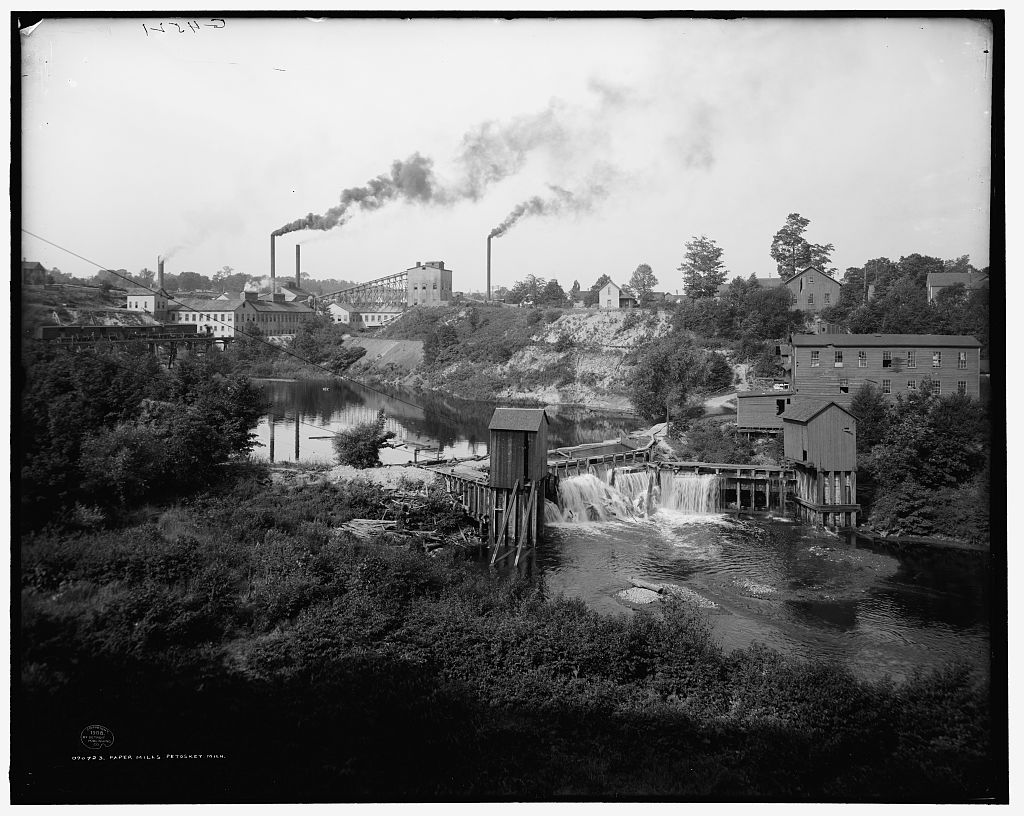 Bridges and a dam by the Petoskey, Michigan paper mills ~ Library of Congress, Detroit Publishing Company Collection
The Little Traverse Historical Society has an original postcard shown below and in the header photo
on this web page, of the exact photo above showing...
Hankey Dam 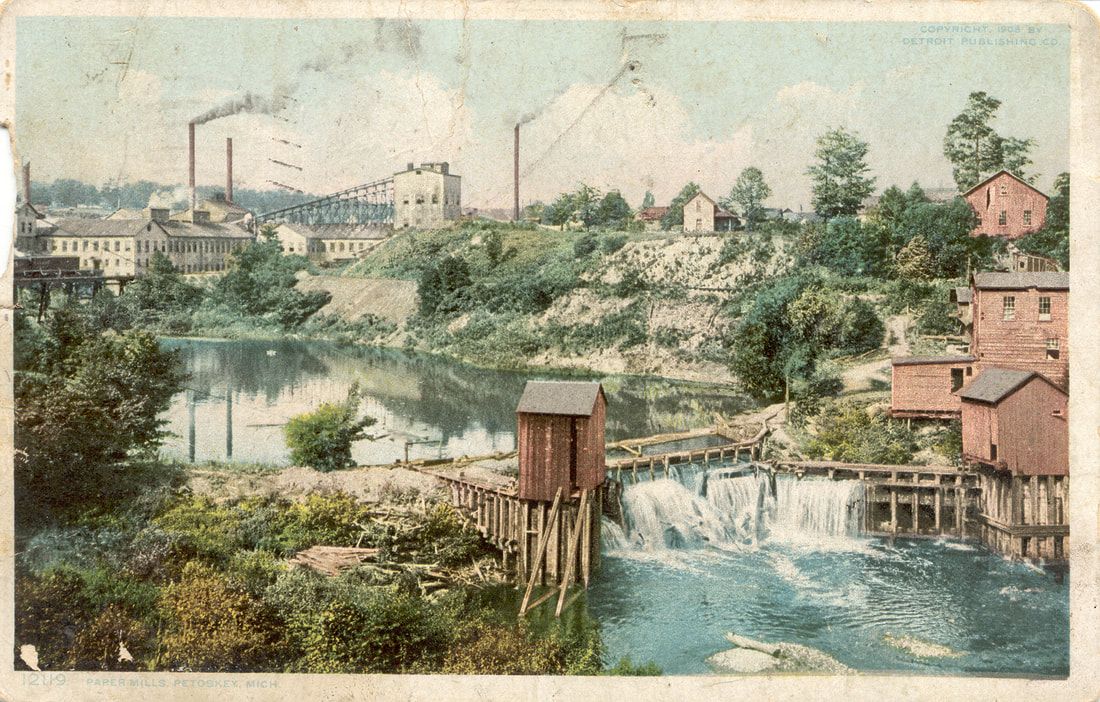 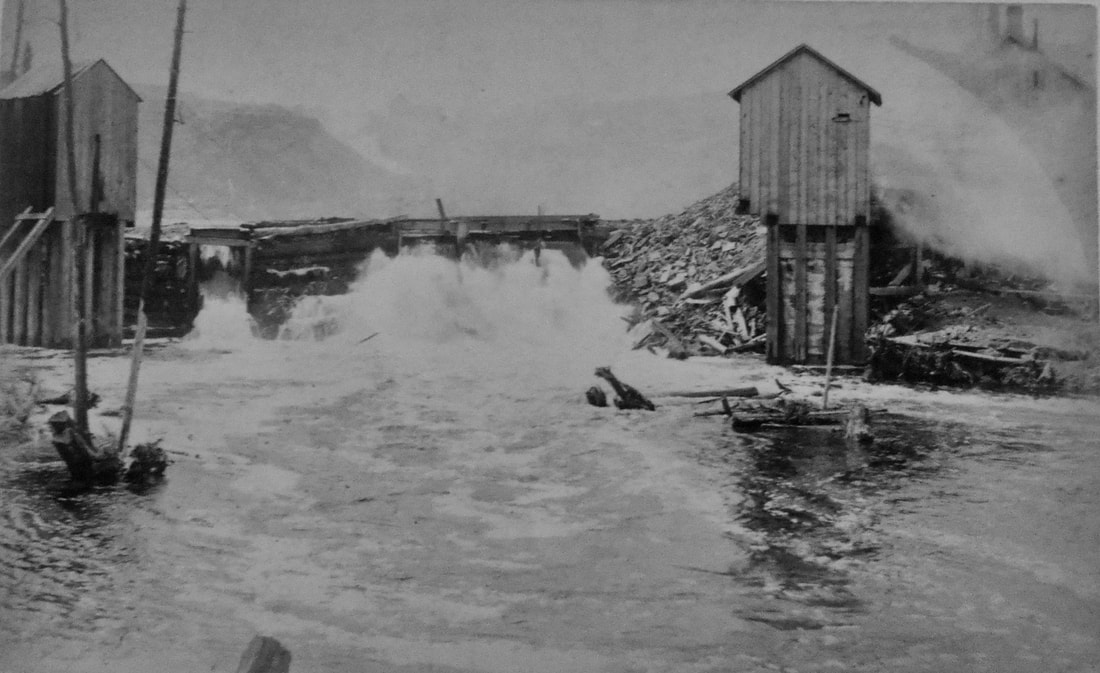 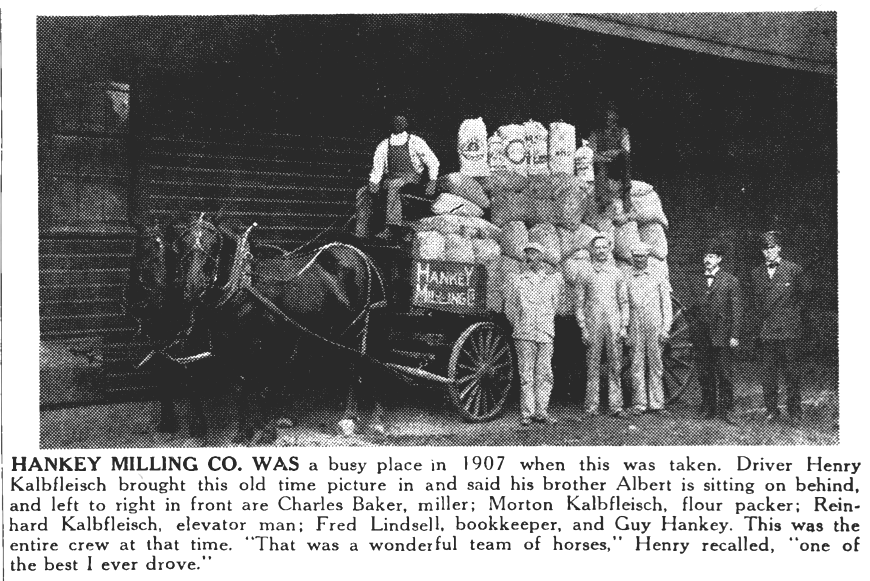 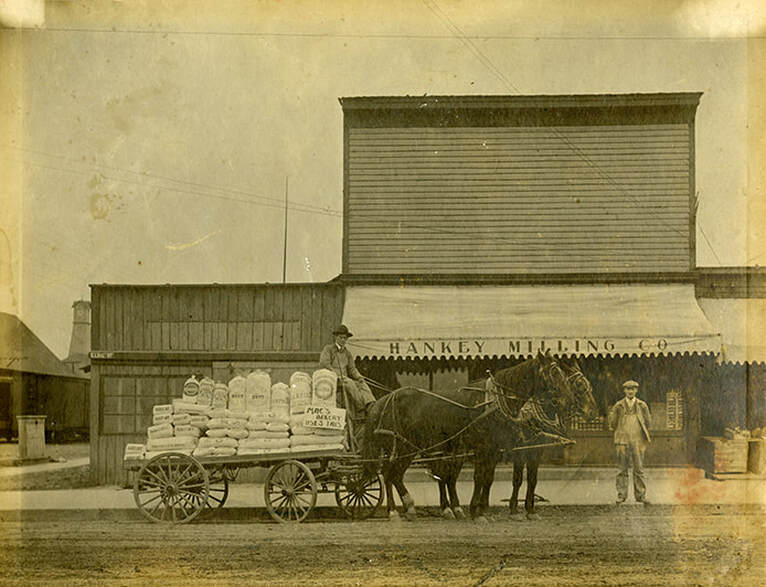 Little Traverse Historical Society Photo Collection (Undated)
Photo/Postcard Below: 1907 Viewing Petoskey from the west... looking across the Bear River with the railroad's wooden trestle leading to the east side of the river where Hankey Mill was located on the river's bluff. 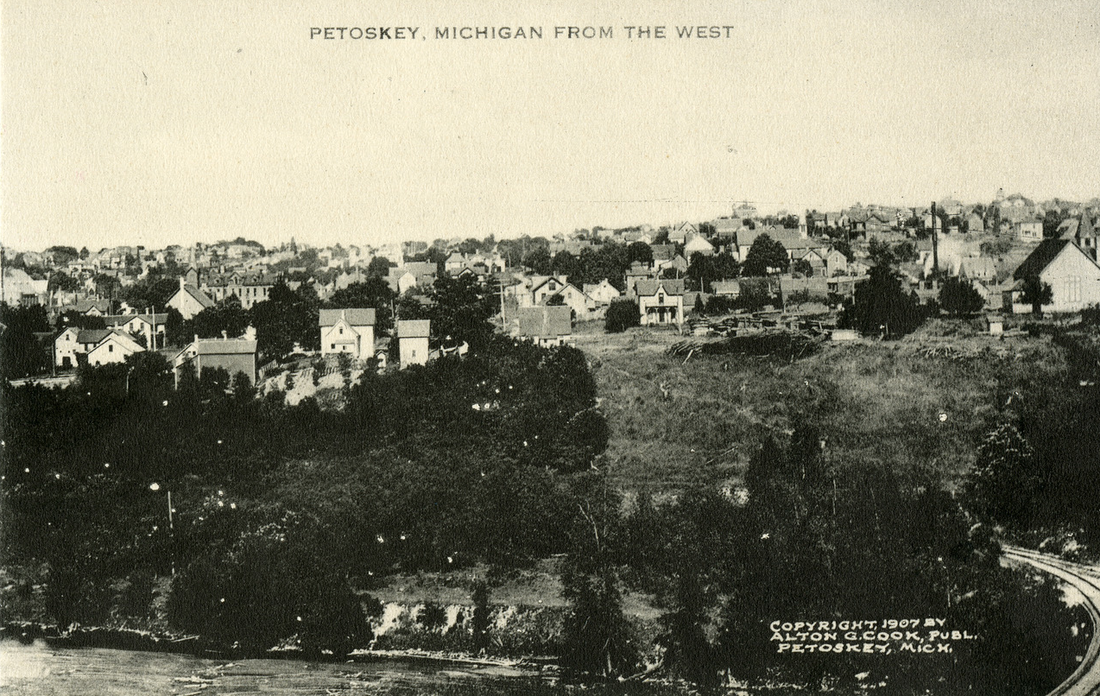 Little Traverse Historical Society Photo Collection
Photo Below: 1915 ~ Engineer was A.B. Moeller and Fireman was O. Jones. The railroad trestle led across the Bear River north of the paper mill. Hankey Milling is in the background on the east riverbank. 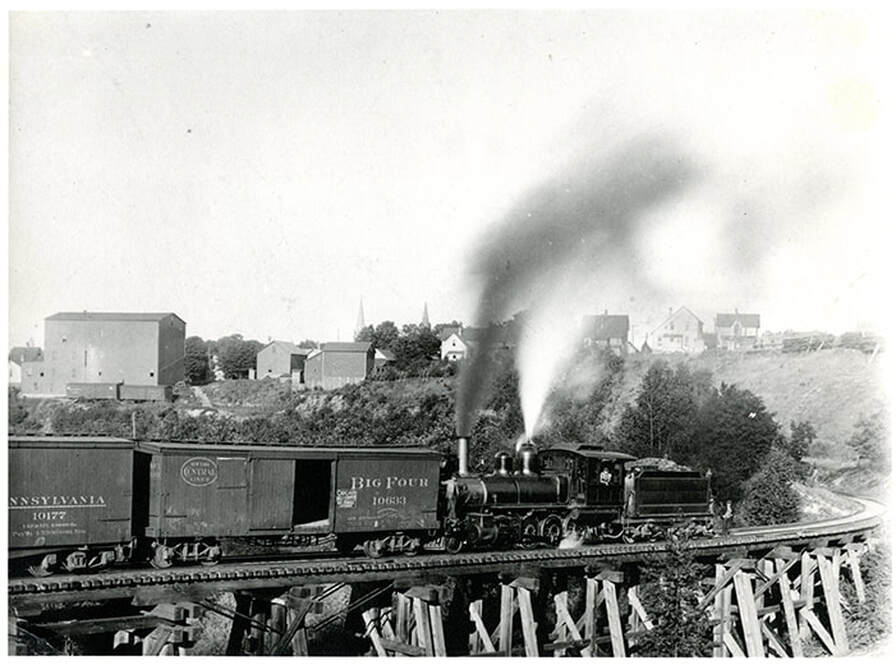 Little Traverse Historical Museum (Undated)
Photos Below: Hankey Milling Company (East Side Upper Bank of Bear River)
News Photo Below: John Perry and Harriet Kilborn's 1968 article farther above explained: "Joseph Gardner purchased 14 acres on the east bank of Bear river and erected a flouring mill on the high bank. He operated it only a short time before selling to C.F. Hankey. Under Mr. Hankey's management, the mill became a very successful venture. Water power turned the wheels of this plant by means of a steel cable, from which the name 'cable mills' derived. The dam supplying the power for the Hankey mill was the one constructed by Shaw and McMillan in 1875." This explains the cables showing in the 1913 news photo below and also seen in photos above of the Hankey Dam. 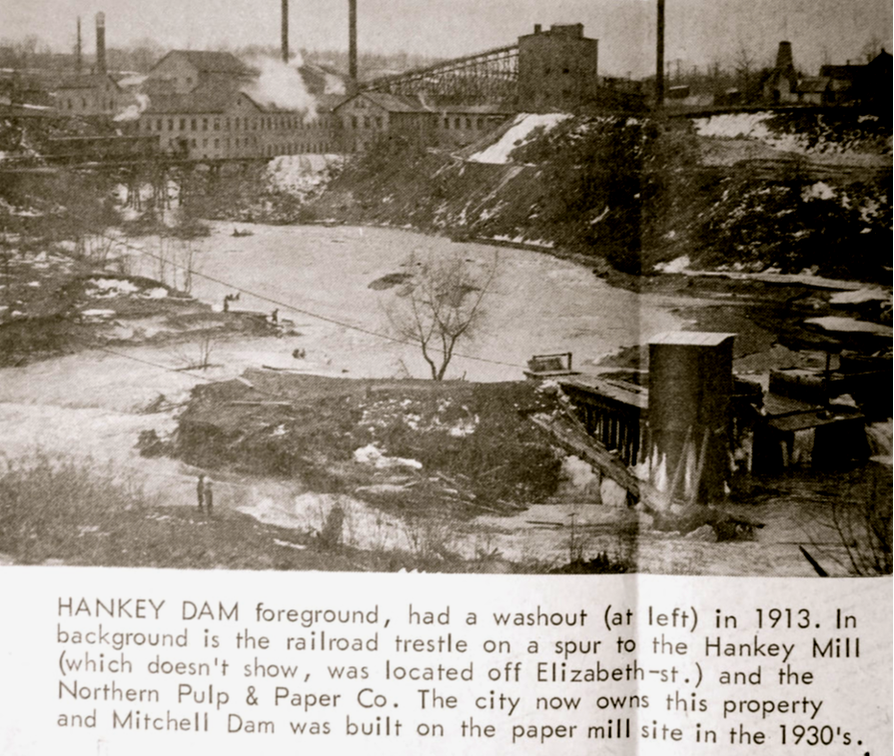 The Hankey Brothers Cable Mill was located at the corner of Elizabeth and Grove streets. 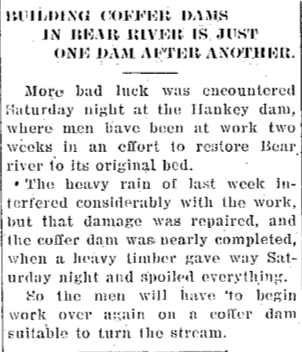 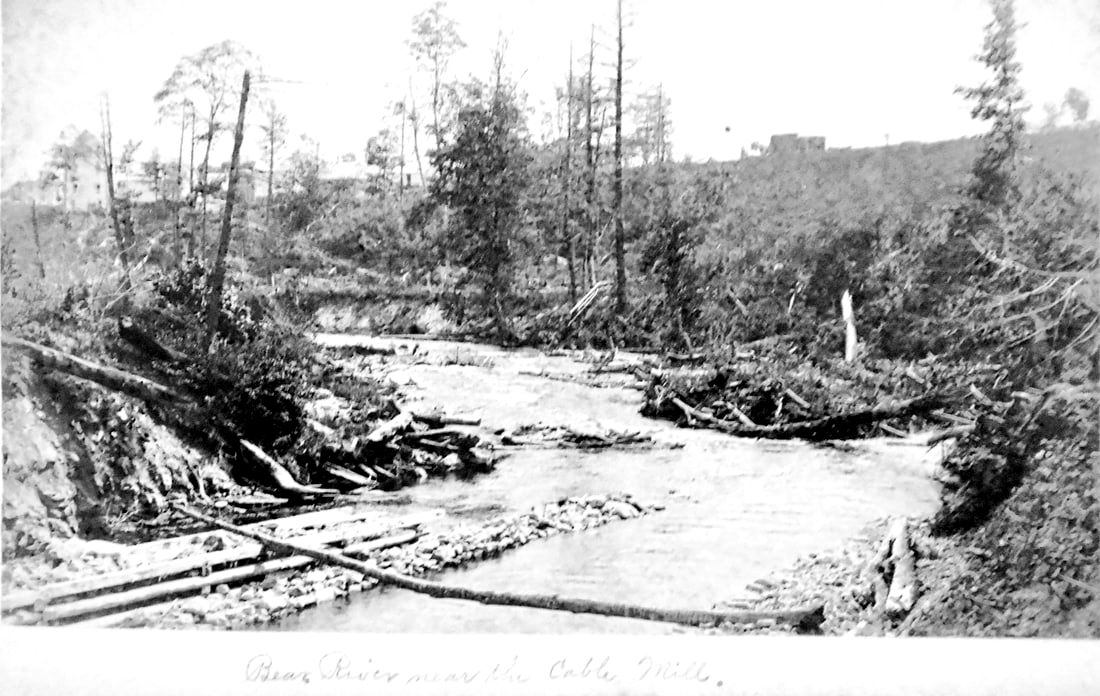 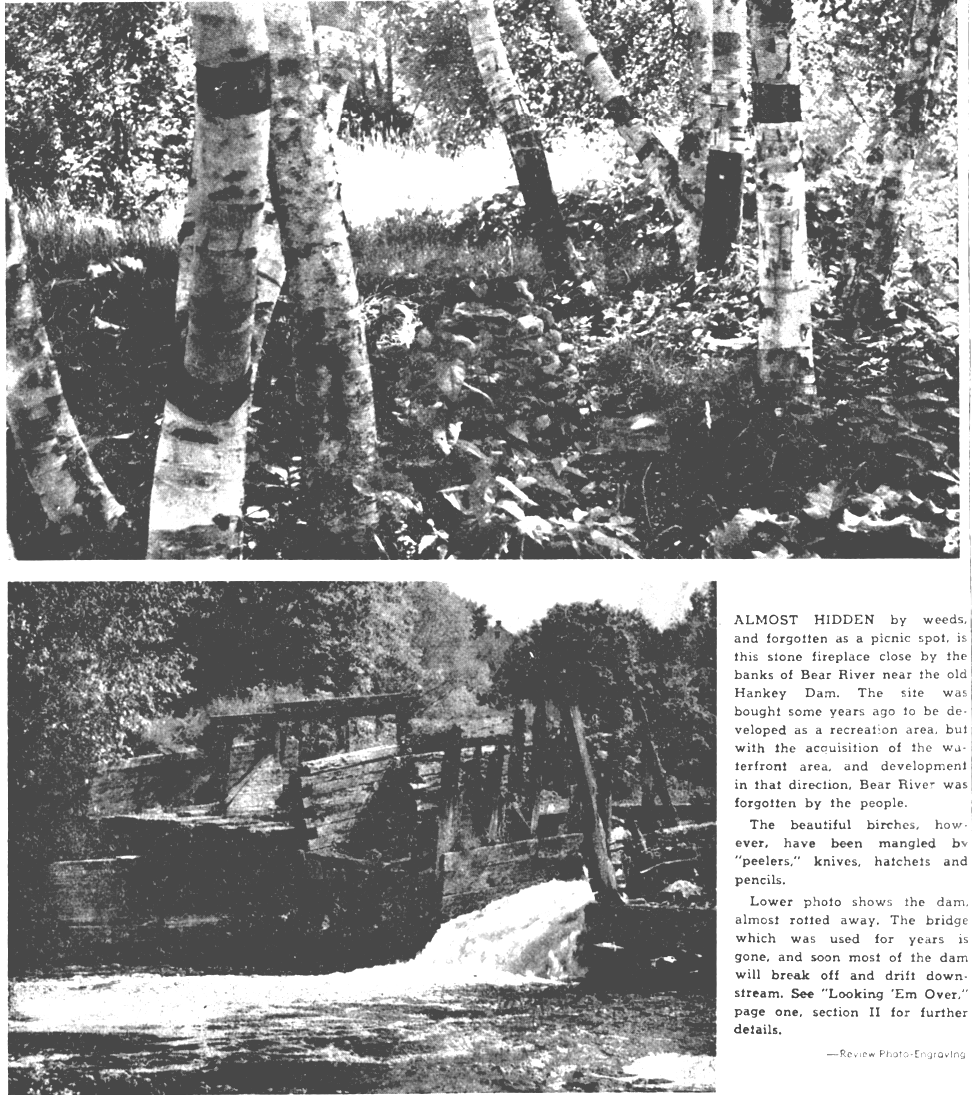 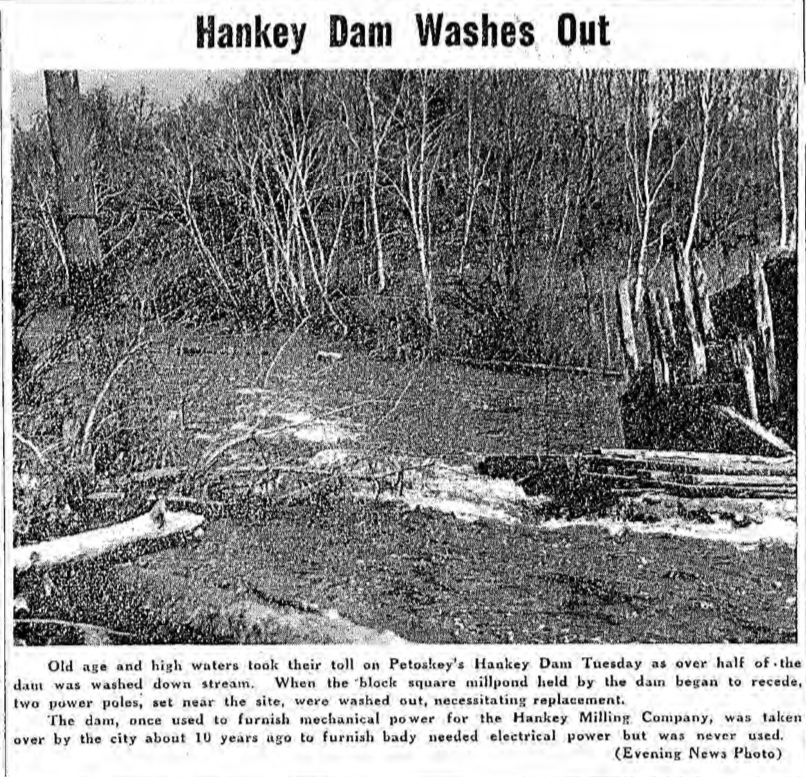